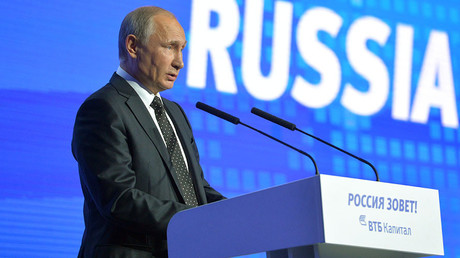 Russia and the US will meet with regional powers to discuss possible steps for Syria crisis settlement on October 15 in Lausanne, Switzerland, the Russian Foreign Ministry said in a statement.
–

“According to the agreement between Russian Foreign Minister Sergey Lavrov and US Secretary of State John Kerry, the meeting of foreign ministers of Russia, the US and key regional states to consider possible additional steps to create conditions for the settlement of the Syrian crisis will take place in Lausanne on October 15,” the statements reads.

Besides Lavrov and Kerry, the chief diplomats from Turkey, Qatar, Saudi Arabia and Iran will also take part in the talks.

The Lausanne talks were initially announced by Lavrov, who expressed hope in his interview with CNN that that the meeting “will launch a serious dialogue on the basis of the principles contained in the Russian-American deal, which was broadly welcomed but which unfortunately was not launched.”

Putin: We know who destroyed aid convoy in Aleppo, Syria
–

Russian President Vladimir Putin talked with German Chancellor Angela Merkel and French President Francois Hollande by phone on Wednesday, and expressed hope that the meeting of Russian and US top diplomats “will be fruitful from the point of view of real assistance to the Syrian (crisis) resolution,” the Kremlin said.

No bilateral meetings between Lavrov and Kerry outside of the multinational talks on Syria are expected in Lausanne, White House spokesman Josh Earnest said.

On October 3, Washington said it was suspending bilateral cooperation with Moscow, which was aimed at sustaining the ceasefire in Syria agreed by the sides on September 9 after months of negotiations.

The ceasefire suffered a major blow on September 17, when US-led coalition planes struck Syrian military near the town of Deir ez-Zor, killing 83 soldiers.

Several days later, a humanitarian aid convoy on its way to Aleppo was attacked. Moscow has blamed the terrorists on the ground for the incident, while Washington has accused Damascus and Moscow, saying it was a bombing.

Putin addressed the issue of the convoy attack during his speech at an economic forum in Moscow, saying: “It was one of the terrorist groups. And we know that, say, the Americans know it too, but prefer to take a different position, to falsely accuse Russia.”

The US claimed it suspended cooperation because Russia didn’t deliver on a promise to make sure Damascus suspended its military campaign and provide humanitarian access to besieged areas of Syria.

Russia accused the US of failing to separate the moderate opposition under its control from the jihadists, as was agreed, and organize the withdrawal of militants from Castello Road to allow humanitarian aid supply to Aleppo.