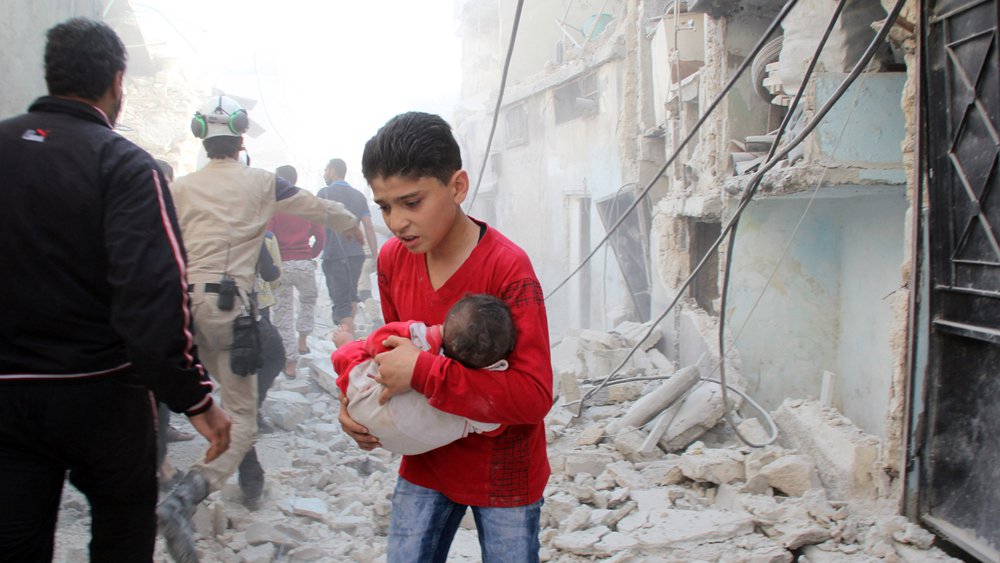 A recent article posted by the editor of The Daily Maverick calls for “the urgent attention of all BRICS members to respond to the continued violations of international law in Syria,” along with a list of co-signatories.

So far so good. But further reading reveals a gross ineptitude and a gross negligence of the facts on the ground in Syria by both the editor and those who added their names to this open letter. In the leader to the article, they state:

“A recent ceasefire arrangement should have allowed life-saving medicines, food and supplies to reach Syrians in besieged areas. It did not. Instead, an unconscionable attack took place on a humanitarian convoy set to deliver life-saving aid to the people of Aleppo.”

This is an accurate statement.

However, what they have failed to mention and completely omitted, is that the ceasefire was first broken by a US bombing raid on the Syrian Army in Deir el-Zour — a bombing raid that continued for over an hour, in spite of the agreement signed between John Kerry and Sergei Lavrov only days earlier.

The Americans were repeatedly informed during this time that their target was not ISIL terrorists, but the Syrian Army.

Over 80 Syrian military were killed with more wounded, Syrian Army Forces who have been fighting Islamic State infiltration for five years now.

With Russian air support the Syrian Army freed the ancient city of Palmyra from these barbarians who massacred the inhabitants and destroyed their antiquities.

Since the Russians and the Syrians have freed the city they have discovered and uncovered a number of mass graves of mostly civilians who were tortured and executed by the ISIL terrorists.

Hot on the heels of this US bombing raid on Dier el-Zour, was a contingent of ISIL, who the US failed to bomb, who are now attempting to retake that city as well as retake Palmyra.

In conjunction with this atrocity during the ceasefire which was broken by the Americans who later at the UN security council referred to it as “a mistake” on their part, even though they continued to bomb for one hour and were repeatedly contacted by the Russians and told:

a) This was breaking the ceasefire and …

b) Their target was not ISIL terrorists, but the Syrian army.

In the last week, the US has cut a deal with Iraq to free the ISIL terrorists who have been holding Mosul for ransom; the deal would include allowing 9,000 of the ISIL terrorists to cross the border, in order to bolster their fellow ISIL contingents and assist them in retaking Palmyra and Dier el-Zour.

“More than 9,000 Islamic State (IS, formerly ISIS, ISIL) militants will be redeployed from Mosul to the eastern regions of Syria to carry out a major offensive operation, which involves capturing Deir ez-Zor and Palmyra,” the source said.

But The Daily Maverick and their co-signatories never mention these facts on the ground as to why the ceasefire was broken in the first place.

Nor do they mention Samatha Power or her claim that the US made “a mistake.” None of them obviously were informed of these facts. Instead they go headlong into the attack on the humanitarian convoy where abrogated journalism immediately and without any evidence, pointed a finger at Russia.

So far all the evidence points to a ground attack from Jabhat al-Nusra, an Al-Qaeda affiliated organization who the Americans claim are the so-called “rebels” attempting to overthrow the democratically elected government and the elected President Assad of Syria, both of which were overseen by international observers.

The large majority of these “rebels“are neither Syrian nor are they from the Free Syrian Army. The large majority come from over 100 different countries around the world and all have affiliations with Al-Qaeda and ISIL. Many of them are sponsored by Saudi Arabia and Qatar for the sole purpose of turning Syria from the secular state that it now is, with tolerance and protection for all religious groups, into an Islamist, extremist state.

In the last five years ISIL has beheaded, crucified and mass murdered all Syrian citizens, Christian, Shiite and Sunni who have not complied with their extremist version of Islam. As a result over 300,000 Syrians have died and over 2 million have been displaced.

But The Daily Maverick and their co-signatories do not mention this either. Instead they embark on an inaccurate and extremely biased view on the actions that the Syrian Army and the Russians have taken since the ceasefire was broken by the US and Jabhat al-Nusra.

Destruction of Aleppo was crime against Humanity

The Syrian army with Russian backing is now freeing the northern part of Aleppo which has been held to ransom since 2011 by ISIL terrorists.

These invaders crossed over the border from Turkey and have been terrorising that now destroyed city ever since. Nor do they mention that these ISIL extremists raided shops, businesses and factories, killed their owners and employers and carted off everything that was movable back across the border into Turkey.

Nor do they mention that Western Aleppo during this time has been controlled by the Syrians and the Syrian Army who have been fighting these invaders and have been attempting to free their own country from foreign ISIL extremists.

In order to put an end to the carnage, which is being fought on both sides, with ISIL using Syrian citizens as human shields in Aleppo, The UN Special Envoy for Syria Staffan de Mistura personally offered to escort the terrorists out of the city. But they never mention that these “rebels” are using civilians as human shields either. Syria is under siege from outside forces

Americans refer to similar war situations as “collateral damage,” only they are doing the bombing.

Or “a mistake,“as Samatha Power claimed at the UN security meeting. Similar collateral damage and mistakes as when the American forces launched an airstrike in Afghanistan and hit a hospital from Doctors without Borders, or an entire wedding party of up to 100 people.

Then there is the recent bombing in Yemen at a funeral ceremony, where American bombs in a single strike killed 170 people and injured 500. This is a country that has been under constant attack by Saudi Arabia. Does the Right To Protect (R2P) include attacking innocent civilians in any country that is attempting to defend itself from outside forces?

Nor does The Daily Maverick or their co-signatories mention the press briefing by the US Peace Council (USPC) on Syria:

You can watch the full report here:

Transcript from The Duran

A delegation from the US Peace Council (USPC) recently returned to the US from a fact finding mission to Syria.

The delegation stated that each member paid their own way and that the Syrian Government allowed them to meet whomever they wanted. They issued their report and held a press conference Press conference at the UN on 9th August 2016.

“This is not a civil war in Syria. That’s probably the first thing we heard, and we heard it over and over again.

It is not President Assad against his own people. It is President Assad and the Syrian people, all together, in unity, against outside forces, outside mercenary forces, terror organisations, the names change everyday or every other day, to try to protect their identity, and maybe keep the connection between the country that funded it and that group, kind of a little bit more nebulous, but there are groups, mercenary forces, supported by Qatar, Saudi Arabia, Turkey, United States, and underneath it, Israel, the state of Israel.

Henry Lowendorf, Member of the Executive Board of the US Peace Council, at the 12:30 mark:

“We saw villages, that are basically Christian villages, that have been besieged by the terrorists, but have now been liberated. And the damage done to a shrine in the village called Maaloula, which is a village where they still speak Aramaic, the language of Jesus. And the attacks on the Christian population.

Their two things I want to mention, finally, that we feel are really important…

One is… That while the United States would like to divide the Syrians up, by religion or within a religion — by the different beliefs within that religion. There wasn’t a Syrian we talked to who would accept that.

We spoke to the Grand Mufti, and he said, ‘People ask me how many Muslims there are in Syria?’ and his response is always 23 million. That is the population of Syria.

And when we talk to the bishop of one of the Orthodox Churches, he answered the same thing, the number of Christians is 23 million.

We will not allow ourselves to be divided up the way the United States has divided up the people of Iraq, or Libya, or Afghanistan, or so many other countries. We won’t allow that.

I would strongly recommend that The Daily Maverick and the co-signatories of their “Open Letter to the BRICS Heads of State,” reconsider their facts before they lead others down a path of disinformation and political disaster .

Has The Daily Maverick and their co-signatories also informed themselves about the facts of the Sarin Gas attack in Damascus? One would hope that they also know that these attacks where done by ISIL and not by Assad and that the children who were murdered had been abducted from surrounding villages.

In their own words:

“A muted response at this stage would be an abrogation of leadership and a betrayal of the people of Syria.”

Which they have achieved with this “Open Letter” to the BRICS nations.

What they have also failed to mention is that, since 2011, the US, in spite of reports to the contrary, has done little to nothing to prevent the rise of ISIL in Iraq and Syria or the carnage that has been caused to the peoples of those two countries. And they have failed to mention that it is only since September 2015 when Russia, another BRICS country, was invited by the Syrian government to help and assist them, that something has been done to cauterize the savagery and barbarity that has been set lose in the Middle East.

I have to ask, have any of the names listed below, including the editor of the The Daily Maverick, been to Syria themselves, as the members of the US Peace Council (USPC) have?