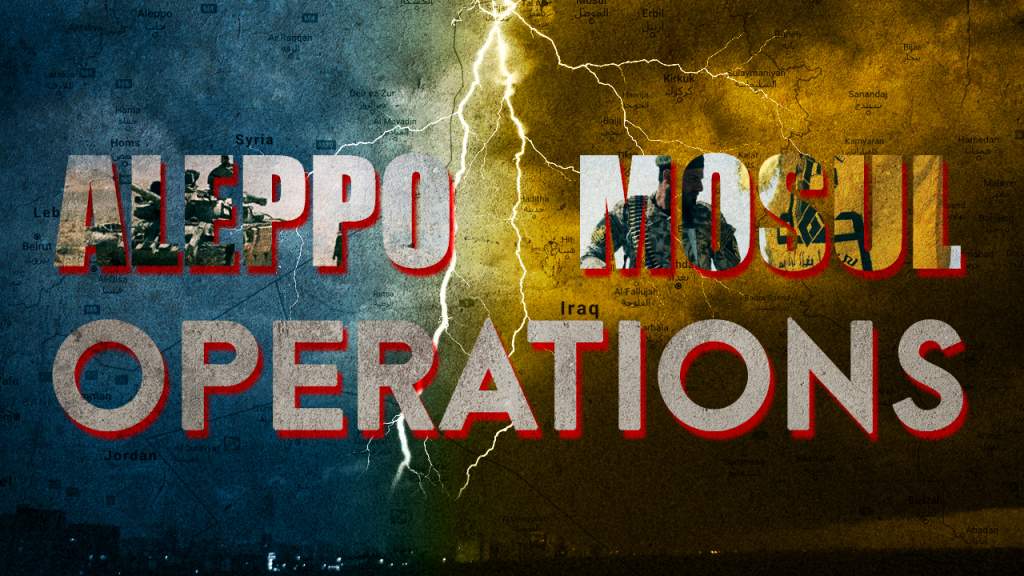 Since previous military report, the Syrian army, Harakat Hezbollah al-Nujaba, Liwa al-Quds Lebanese Hezbollah have achieved more gains in Aleppo city. They took control of the agriculture school, located south of Tall Asfar, and reached the ”Youth Housing” north of the Hanano Housing. Now, the army and Liwa al-Quds focused on military operations in the areas of the Ba’edin and Jandoul roundabouts. By Oct. 17, the government forces seized the Intharat Heights near the Ba’edin roundabout and secured the areas near the neighborhoods of Ayn at-Tal and Haydariyah.

A separate attempt to push to Jabal Badro has not resulted in any notable success. The army and the National Defense Forces (NDF) also launched an operation, advancing in the areas west of the Aleppo International Airport. Sheikh Lutfi is the goal. On Oct. 17, clashes intensified in Salah Addeen and the army took control of large parts of the 1070 Apartent Project.

On Oct. 16, the Syrian Army’s Tiger Forces and the NDF liberated from Jabhat Fatah al-Sham (formerly Jabhat al-Nusra), Ahrar al-Sham and its allies the strategic city of Ma’ardas in the northern part of Hama province. This was the biggest success of the pro-government forces since the start of massive counter-offensive in the province. The militant-controlled city of Souran will become the next target of the army and the NDF. Both Souran and Ma’ardas are strategically located along the highway between the cities of Homs and Aleppo.

The army also set a full-control of the villages of Qudsiyah and al-Hamah, located near Damascus after militants had withdrew from the areas under the deal with the government.

On Oct. 17, the army and the NDF continued operation in Western Ghouta, aiming the strategic town of Khan Shih. The government forces were developing the advance from the recently liberated town of Deir Khabiyah. The militants’ defenses are on the verge of collapse in the region.

Late on Oct. 15, the ISIS terrorist group withdrew from the area of Azaz in the northern part of Aleppo province. The ISIS forces were set to deploy in Al-Bab in order to prepare to defend this strategic city in Aleppo province. Next day Turkish-backed militant groups, supported by the Turkish Armed Forces, took control of the cities of Dabiq and Sawran and the nearby areas, including Sawran, Tilalayn, Salihiyah, Hawr al-Nahr and Sunbul.

On Oct. 15, the Russian Northern Fleet officially announced that a group of warships, led by heavy aircraft-carrying missile cruiser, had started a cruise to the areas of the northeastern Atlantic and the Mediterranean. The group includes “the Pyotr Velikiy heavy nuclear missile cruiser, anti-submarine warships the Vice Admiral Kulakov and the Severomorsk, as well as supply vessels.”

The Kuznetsov is expected to join up with a nuclear submarine, as well as Tu-160 long-range strategic bombers, for anti-piracy and anti-terror exercises before arriving in Eastern Mediterranean where it will join the Russian forces fighting terrorists in Syria.

The joint forces of the US-led coalition, the Iraqi government, the pro-government Popular Mobilization Units (PMU) and the Kurdish Peshmerga launched the long-awaited military operation to liberate the last ISIS major stronghold in Iraq – Mosul. Since Saturday, Mosul and the nearby areas have been the target of massive shelling and bombing campaigns by the US artillery and the US-led coalition’s air power.

The joint anti-ISIS forces are aiming to secure the Mosul countryside before storming the ISIS stronghold itself. On Oct. 16, the Iraqi Army’s 9th Division and the PMU liberated the city of Bashiqa from ISIS. The Peshmerga joined the operation northeast of Mosul. The Kurdish fighters will block ISIS escape routers and receive and screen refugees but not enter the city.

The Obama administration focused on attempts to retake Mosul after the widely promoted idea of liberation of Raqqa in Syria failed due to the ongoing Turkish-Kurdish tensions in northern Syria. There are also reports that the US military staff has opposed that operation because it will weaken anti-Assad forces.