No, we are not saying that Philippine leader, Rodrigo Duterte, is a good guy. It is premature to make a definitive claim about him. But it seems that he has had enough of the New World Order ideology in the Philippines.

In fact, many Asian leaders are tired of this diabolical plan, which has been forced upon much of the entire world through covert means. Duterte doesn’t seem to be joking:

“Duterte called U.S. President Barack Obama, the European Union and United Nations ‘fools,’ and warned they would end up humiliated and outsmarted if they accepted an invitation to investigate his war on drugs.”

Duterte said: “I’ll play with you. I’m very sure they cannot be brighter than me. I will ask five questions that will humiliate you. Watch out for that, it will be a spectacle.”

Duterte was just warming up. He went even further, calling these people fools: “These fools think (they can do anything) because the Philippines is a small nation.”

What he is implicitly saying here is that New World Order agents simply are not acting rationally, and we all know that this always happens when an individual or entity abandons the moral and political order.

It has been reported that the Philippines was or is still ravaged by drug traffickers and gangs. Filipinos were simply powerless dealing with those people and their crimes. Those drug traffickers made a sort of pact with “Mexico’s infamous Sinaloa cartel” and the “established Filipino-Chinese drug syndicates to take full advantage of the country’s rampant police corruption, lax border controls and comparatively soft narcotic laws for the region.”[1] We read:

“The Philippine Drug Enforcement Agency had stated that 92% of districts in Manila were affected by drugs, the overwhelming drug of choice being shabu – a local name for crystal meth. For the third of Filipinos living in poverty, shabu gives the unemployed an income with small-time drug dealing, the hungry a cheap appetite suppressant, and the overworked fuel to work punishing hours.”[2]

After Duterte ascended to the throne, it is said that he began to liquidate those drug traffickers. As a result, many Filipinos begin to view him as a breath of fresh air; they believe that some actions are better than no action at all.

“Duterte’s victory came as the Philippines’ drug problem was becoming so endemic that a firebrand, cartoon-character of a president taking a sledgehammer to the issue became a reasonable gamble… Duterte has painted himself as a man of the people over the course of a staggering seven terms as mayor of , Davao City, his home town.

“First appointed after Ferdinand Marcos’s administration was toppled by the people power revolution in 1986, Duterte’s tough but fair leadership has been credited for Davao’s plummeting crime rates.”[3]

The oligarchs have let Filipinos down for years, and for them Duterte seems to be an anti-oligarch. “Filipinos did not vote for Duterte; they voted for a jab at the establishment that has, for the past five decades, consistently let them down.”[4]

In any event, Paul Craig Roberts has argued that Duterte needs to watch his back because the Neoconservatives are probably working on an essentially diabolical plan to oust him.

“He has announced upcoming visits to China and Russia, and his foreign minister has declared that it is time for the Philippines to end its subservience to Washington. In this sense, regime change has already occurred. Duterte has suspended military maneuvers with the US. His defense minister said that the Philippines can get along without US military aid and prefers cooperation over conflict with China.

“Duterte might simply be trying to extract a larger pay-off from Washington, but he had better be careful. Washington will not let Duterte move the Philippines into the Chinese camp.”

Neocons like Noah Rothman have already been mobilized to demonize Duterte.[6] But it seems that their plan hasn’t worked out pretty well. And obviously Duterte’s plans to ally with China and Russia is detrimental to the New World Order.

“I met with Medvedev, I am revealing it to you now,” Duterte said. “I told him this is the situation: They [US officials] are giving me a hard time, they are disrespecting me; they are shameless.”[7]

If Duterte had already decided to “cross the Rubicon” by giving Russia and China the nod and by giving up on the Zionist States of America,[8] then New World Order agents will have a hard time articulating their lies and fabrications in the Philippines and much of Asia.

Perhaps Asia is heeding Putin’s call to promote a frontal attack on the New World Order and its agents. This leads us to conclude that NWO agents are still made and sad because Russia and indeed Vladimir Putin aren’t letting them have their cake and eat it too. 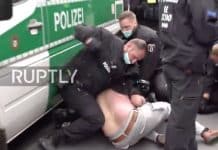 Are Ben and Jerry anti-Semites?

COVID: Some Jabbed People have 7 times Less Antibodies than others. Israeli study