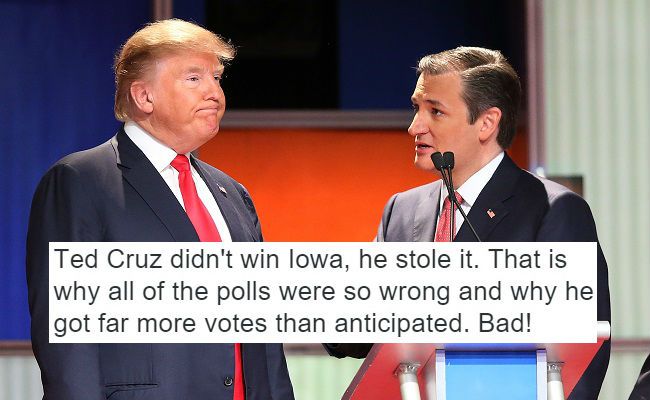 I will begin with a confession: I watched the Presidential debate last night. As an admission of masochism, that ranks with Max Mosley’s admission that he paid call girls to insult him in German while whipping him till he bled.

Actually, I must be even more masochistic than Mosley. He, at least, enjoyed himself.

I watched the entire Trump v. Clinton debate with  my family and the only thing I enjoyed was the pizza.

The thought that Americans are going to anoint one of these two individuals as “leader of the free world” almost made me lose that pizza. But fortunately, just as I was about to projectile-vomit all over the screen, Trump did something interesting: He suggested the US ought to be friends, not enemies, with Russia.

Then he said something even more interesting: “I’ll keep you in suspense” about accepting the election outcome, since the whole game looks like it’s rigged.

And I started thinking:

What this country needs is a smarter, more principled version of Donald Trump.”

Then again: If he had principles or a three-digit IQ, he never could have won the Republican primary.

Then I watched the Trump-bashing mainstream media pile on after the debate. Echoing Crooked Hillary, they worked themselves into high dudgeon over Trump’s refusal to accept the election outcome even if it were rigged. The whole basis of our system, they pontificated, is peaceful transition of power, even after rigged elections – or, they might have added, CIA assassinations, acts of election-swaying high treason, or other manner of disguised coup d’état.

By refusing to say “I will accept the ostensible outcome of the election as reported by the mainstream media, no matter how obviously rigged it might be,” Trump is treading on dangerous ground.

As Philip Zelikow, 9/11 scriptwriter and self-described specialist in “the creation and maintenance of public myths” might have put it: The whole basis of our system is that THE PUBLIC MYTH OF AMERICAN DEMOCRACY MUST BE PRESERVED, whether or not that myth corresponds to any discernible reality.

By undermining faith in the system, Trump is committing a capital crime in the eyes of the public-myth-mongering elite. The system that feeds and houses and clothes these people, very nicely thank you, while constantly massaging their voracious egos, depends on the Big Lie of “American Democracy.”

If we admit that most post-WWII executive transitions were NOT based on honest elections, but were instead disguised coups d’état, then all these media people would have to face the abject failure of their profession…and, more pertinently, face mobs with torches and pitchforks.

As I watched the post-debate MSM commentaries, I yearned to see those torch-and-pitchfork-bearing mobs burst into the studios and get to work.

Peaceful, democratic transitions?! In the USA!??!?

1945-1948: Roosevelt is poisoned, elevating Zionist-freemason stooge Harry Truman, who proceeds to incinerate two Japanese cities in a satanic ritual. Later, Truman is “re-elected” thanks to the same mob that chose him in the first place. Kowtowing to the Zionists, Truman accepts two million in dollars in cash in a suitcase: payment for his refusal to heed the unanimous advice of his policy professionals, and instead recognize the criminal, genocidal “state of Israel.”

1952-1960: The military-industrial complex appoints Eisenhower–who bites, or at least nibbles, the hand that feeds him by delivering a toothless “warning” as he leaves office.

1960: JFK steals the election with the help of the mafia. Massive vote fraud in Illinois and Texas puts him over the top.

1963: James Jesus Angleton, Allen Dulles, and other Zionist-freemason assets in and around the CIA orchestrate the assassination of JFK. Dulles (like Zelikow with 9/11) scripts both the assassination itself, and the “public myth” enshrined by the “investigative commission.” Lyndon Johnson, a brutal Zionist-mafia-owned thug who employs a personal hit man, Mac Wallace, participates in the assassination and coverup.

1968: Bobby Kennedy, presumptive president, murdered by the CIA. Nixon steals the election by treasonously cutting a deal with North Vietnam, which agreed to torpedo peace negotiations with the Democrats. Had those negotiations proceeded normally, Humphrey would have defeated Nixon.

1972: Nixon’s gang of thugs drug and poison Ed Muskie, the strongest potential Democratic opponent, and conspire to make sure that George McGovern, the weakest potential opponent, gets the nomination. Talk about a rigged election!

1974: The Bush Crime Family and its assets in the CIA and military overthrow Nixon and Kissinger in a disguised coup d’état. The resulting public myth, which has virtually nothing to do with reality, is entitled “Watergate.” For details, read Russ Baker’s Family of Secrets.

1980: Carter is overthrown in a coup d’état orchestrated by the Bush Crime Family from its power base in the CIA. The key element: GHW Bush and William Casey repeatedly flew to Europe to secretly meet with Iranians and cut a deal to ensure that the US hostages in Tehran remained locked up, thereby making Carter’s re-election impossible. For details, read the two books entitled October Surprise, one by Barbara Honegger, the other by Gary Sick. Honegger’s, the original, is better.

From 1980 onward, every administration is placed in power, and run, by the CIA.

1981: John Hinckley, a mind-controlled asset of the Bush Crime Family, shoots and nearly kills Reagan in a Bush-orchestrated coup attempt. For evidence from an eyewitness to White House discussions during the attempted coup, listen to my interview with then White House Policy Analyst Barbara Honegger:

1988: GHW Bush, lead on-the-ground participant in the JFK assassination (he commanded one of the shooter teams) uses his CIA base and crime connections to seize power in another rigged election.

1992: The Zionists decide GHW Bush, whose advisors say things like “fu$k the Jews, they don’t vote for us anyway,” and who sells AIWACs to the Saudis, should be retired early – so they use money power and media power to elevate another drug-dealing CIA asset, Bill Clinton.

1996 – 2000: After Clinton uses crime connections and foreign donors to ensure “re-election” the Zionists fear he will pursue a “legacy” by forcing Israel to accept a peace deal involving withdrawal from the Occupied Territories – so the Zionist mob sends Monica Lewinsky into the White House and orchestrates the resulting “scandal” to hobble Clinton’s second term ambitions.

2000: The Bush Crime Family steals an election it obviously lost, by sending thugs to Florida to terrorize those trying to actually count the votes, then working with criminal assets on the Supreme Court to validate the stolen election with a “Supreme Coup.”

2004: Bush loses again, this time in a landslide…but fortunately for him, the black box voting machines are rigged. The guy who rigged them, Mike Connell, will later die in a plane crash shortly before he was due in court to testify against Karl Rove.

2008 – 2016: Lifelong CIA asset Barack Obama elevated to Frontman-in-Chief status by the usual suspects. Obama later admits that he can’t do any of the things he promised, such as closing Guantanamo, because he “owes certain people” and therefore had to appoint Israeli agent Rahm Emmanuel as Chief of Staff and let Emmanuel and his successors basically govern the nation on behalf of Israel.

2016: Donald Trump expresses skepticism about the “peaceful transition of power through honest elections” mantra – and the media waxes apoplectic.

Before 1945, the USA’s elections were not perfect. But they were “real” in a sense that post-1945 elections have not been.

At some deep, almost unconscious level – perhaps driven by the public myth of the “surprise attack at Pearl Harbor” – the USA opted to abolish the Republic and become an Empire.

Trump, for all his many failings, seems to think the USA should act as an independent Republic, rather than the biggest cog in an international-bankster-driven imperial machine. No wonder Pat Buchanan likes him…and the Imperial Consent-Manufacturing Apparatus hates him.

The international bankster owners of the “American” Empire are facing a stark choice: Disband the Empire peacefully and allow the emergence of a fully multipolar world (which would set back their dreams of a one-world NWO dictatorship); or fight World War Three now, while the USA still has a military advantage.

It looks to me like they are opting for World War III. The way to stop it is to turn the American people against the Empire.

The arrogant, egomaniacal, ADD-addled, corruption-drenched reality talk show host Donald Trump is helping do that, in his often foolish or even downright insane way. The more he undermines Americans’ faith in their evil system, the better off the planet will be.

So may Allah bless him and forgive his many sins, and grant him supreme success in demolishing America’s public myths – the Big Lies that are destroying our world.