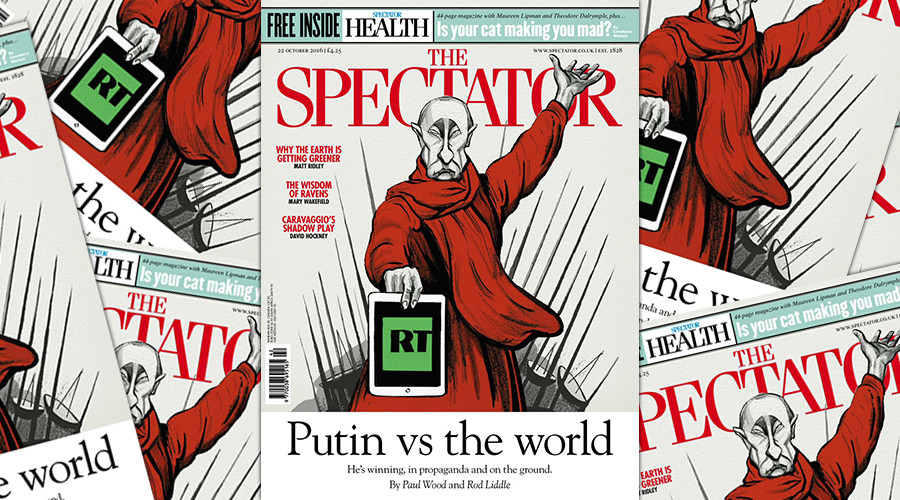 Spectator deputy editor Freddy Gray seemed to have hit the final nail in the political coffin when he said that propaganda against Russia is “obviously a good selling subject for us,” but he added that “it doesn’t mean that we’re covering it in a biased way.”[1] The Spectator, he said, is “not being Russophobic, but also not being Russophilic.”[2]

Well, if Russia is “obviously a good selling subject,” then Gray wouldn’t mind playing on both sides of the fence, supporting Russia and lambasting it at the same time. During his interview with Russia Today, Gray was obviously not hostile at all.

But the Spectator has a history of publishing spurious articles about Russia. For example, John O’Sullivan of the same magazine declared in 2014 that “Europe’s ‘new world order’ is letting Vladimir Putin run riot.”[3]

The same magazine published an article by Paul Wood of the BBC entitled, “Putin’s dangerous game in the Baltic.”[4] The article cites Professor Karen Dawisha of Miami University, author of Putin’s Kleptocracy: Who Owns Russia, approvingly.

Dawisha’s argument in her book is pretty straightforward: Putin is a former KGB and therefore cannot be trusted; Putin is the new Hitler; Putin is trying to build an empire; Putin is a threat to the West; Putin is linked to organized crimes, etc., etc.

The Brookings Institution published a book entitled Mr. Putin in 2013, in which its authors, Fiona Hill and Clifford G. Gaddy, argued that Putin is “the greatest challenge to European security and the global world order.”[5]

When she was asked to provide evidence for the claim that “Putin has amassed a fortune of about 40 billion dollars,” Dawisha responded,

“I don’t honestly have the access to say with confidence that he has this number of shares. But, what we have are statements by—let’s call them Russian whistleblowers, about how he has amassed wealth himself….And the New York Times reported this last summer that the intelligence services in the United States had done a study in around 2008 and 2009.”

Dawisha knows pretty well that the New York Times and indeed the United States have been involved in destabilizing Russia from time immemorial. Surely a scholar of her stature knows that agents like George Soros and the Chicago Boys helped destroy the Russian economy in the 1990s.[6]

But Dawisha could not point some of those facts out in her book because that would ruin her entire weltanschauung. In the same vein, the US embassy cables said that Russia “is a virtual ‘mafia state,’”[7] but the same cables again risibly ignored the fact that New World Order agents were playing dice with the Russian economy and destroying the livelihood of millions of decent people.

Scholar Janine E. Wedel of Washington University wrote back in 1998 (long before Dawisha published her book) that “the majority of Russian people find themselves worse off economically” after Soros and the Chicago Boys cooperated with the Russian oligarchs and looted the economy.

“The privatization drive that was supposed to reap the fruits of the free market instead helped to create a system of tycoon capitalism run for the benefit of a corrupt political oligarchy that has appropriated hundreds of millions of dollars of Western aid and plundered Russia’s wealth.”[8]

This would not be last time that the Chicago Boys destroyed a sovereign nation through economic theft. They did the same thing in places like Chile.[9] Orlando Letelier, the former right-hand man of Chilean President Salvador Allende, published a devastating article work on the Chicago Boys back in 1976 in The Nation. As a result, he was assassinated, presumably by the Powers That Be. In fact, the CIA’s fingerprints in the 1973 coup in Chile, which overthrew President Salvador Allende, were incontrovertible.[10]

The Chicago Boys and other economic thugs used capitalism, “freedom,” and ultimately “economic policies” to covertly “alter social structures” in Chile,[11] which was considered as a lab experiment for the CIA. After the 1973 coup, General Augusto Pinochet, a CIA puppet, ascended to the throne. When that happened, all hell broke loose:

“Pinochet faced universal condemnation for his human-rights record, which became impossible to ignore: the mass disappearances and executions of leftists (more than 3,200 dead by the end of the junta’s rule); the imprisonment of tens of thousands of people; the complete bans on political protest and dissenting political activity; the murder of beloved artists like Víctor Jara; the roughly 200,000 people forced into exile.

“What frustrated Letelier, a trained economist, was that, even as the world gasped in horror at reports of summary executions in the national stadium and the pervasive use of electroshock in prisons, most critics were silent when it came to Chile’s economic shock  therapy—the brutal methods used by the “Chicago Boys” to turn Chile into the very first laboratory for Milton Friedman’s fundamentalist version of capitalism.

“Indeed, many who condemned Pinochet’s human-rights record heaped praise on the dictator for his bold embrace of free-market fundamentals, which included rapid-fire privatization, the elimination of price controls on staples like bread, and attacks on trade unions.”[12]

As a scholar, Dawisha knows that the Chicago Boys and the United States of America have been using capitalism to destroy nations, including the Russian economy, and now the US economy.[13] Milton Friedman, we are told, “shared responsibility for Pinochet’s crimes.”[14]

But as a New World Order agent, Dawisha is morally and intellectually crippled because the New World Order ideology does not allow her to reach her full potential as a serious thinker. When Putin’s Kleptocracy was released, the New York Times quickly reviewed it and declared that

“Dawisha won’t disappoint readers seeking examples of industrial-size sleaze. She reckons Putin’s private wealth at $40 billion and lists among his prized possessions yachts, planes and palaces — along with a $700,000 wristwatch collection for good measure… Putin’s Kleptocracy is the most persuasive account we have of corruption in contemporary Russia.”[15]

The Times did not tell readers that Dawisha herself could not seriously prove those points and had to rely on, well, the New York Times and the U.S.—a circular argument which requires no mental exercise to dispel.

So, why would Dawisha summon an unreliable source to marshal such a shaky argument? Why would she argue that the KGB, Russian criminal activity, and of course Putin are all connected?[16] And if Dawisha wants to praise Russian whistleblowers, can Dawisha explain to us why the United States would love to see Edward Snowden’s head on a silver platter?[17] Why did Dawisha fail to address these intricate issues?

Dawisha, whether she likes it or not, is working for the New World Order. She said of Jewish propagandist and lesbian Masha Gessen:

“I’m a great admirer of her book. Her book is much broader, covering [Putin’s] entire life. Mine focuses on his political rise from Dresden to the Kremlin and the construction of a network of loyalists (the White House now officially calls them cronies) from this early period. It also provides very detailed information, all sourced from public documents and newspapers.”[18]

Gessen has desperately and hopelessly been doing all she could to demonize Vladimir Putin and to make one false accusation after another against Russia. And because she is not willing to frame her view within the bound of practical reason, she has to live in contradiction.

Gessen once declared that “Gays should have the right to marry.” Yet in the same breath she risibly declared, “I also think equally that the institution of marriage should not exist.” How anyone can believe this claptrap is beyond me. If you are still trying to make sense of this internal contradiction, please contact Masha Gessen.

But it was really interesting to observe that Gessen received a stunning ovation right after she propounded those contradictions.

In any event, perhaps Rod Liddle is right when he concludes “we must deal with Putin… And we are failing to do so. We are losing all ends up.”[19]

Are New World Order agents ready to deal with Putin and indeed Russia? Do they want war or peace?[20] Are they willing to drop their essentially diabolical plan and face reality? Is it right for Hillary to flat out engage in a covert warfare with the Kremlin? Is it right for her to say that “Russia hasn’t paid any attention to ISIS”?[21]

Hillary shot herself in the toe by saying, “I do support the effort to investigate for crimes – war crimes – committed by the Syrians and the Russians, and try to hold them accountable.”[22]

Russia and Syria would almost certainly welcome the challenge, for they would not be the only “regime” to be held accountable for war crimes. Both Putin and Assad would outsmart Hillary in a fair debate or fair trial.

We will address some of these issues this week or the next with Professor Vladimir Golstein of Brown University.[23]

[10] Naomi Klein, “40 Years Ago, This Chilean Exile Warned Us About the Shock Doctrine. Then He Was Assassinated,” The Nation, September 21, 2016. See also Stephen Kinzer, Overthrow: America’s Century of Regime Change from Hawaii to Iraq (New York: Times Books, 2006).

[13] For other sources, see Michael Hudson and Mike Whitney, “How the Chicago Boys Wrecked the Economy,” Counterpunch, August 29, 2008.

[21] Quoted in Freya Berry, “Clinton’s war on Putin: Why did she launch astonishing attack over Russian ‘war crimes’ and claim Kremlin was behind leaks to get Trump elected?,” Daily Mail, October 11, 2016.

[23] For a preview of Golstein’s work, see Vladimir Golstein, “Western Media Coverage of the Ukraine Crisis Is as Distorted as Soviet Propaganda,” The Nation, May 22, 2014.