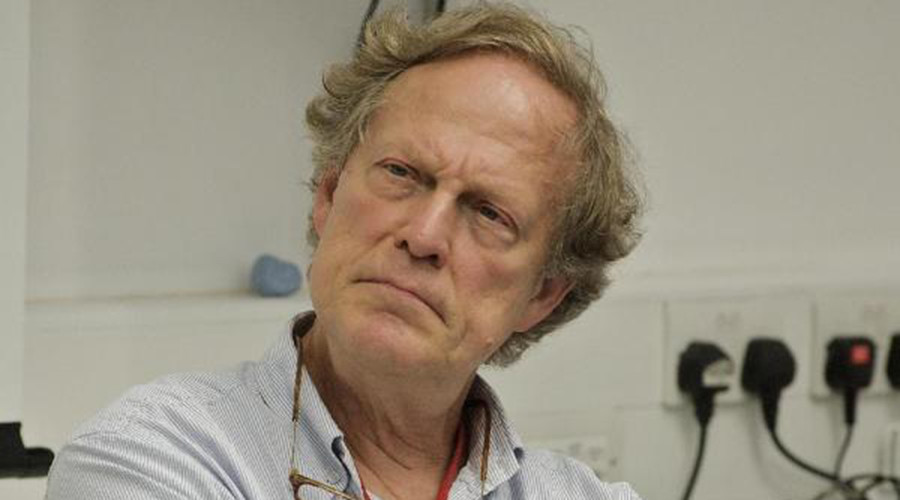 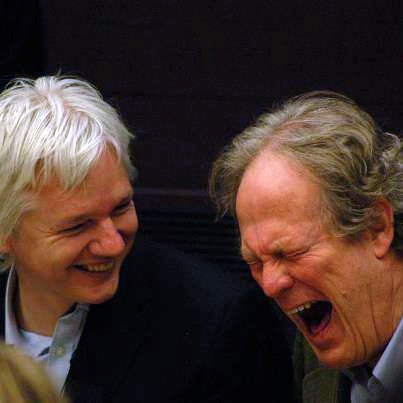 [Editor’s note: It is our belief that McFadyen was MI6 and had been for a very long time. Ian]

Investigative journalist, filmaker, founder of the Centre for Investigative Journalism (CIJ) and co-founder of The Whistler, Gavin MacFadyen died on Saturday 22nd of October 2016. He was also a close associate of Julian Assange.

Gavin Macfadyen was mentor to Assange (and his closest friend in London), to WikiLeaks' Sarah Harrison, Joseph Farrell and many others.

“He was the model of what a journalist should be… He spearheaded the creation of a journalistic landscape which has irrevocably lifted the bar for ethical and hard-hitting reporting. Gavin worked tirelessly to hold power to account.

His life and how he lived it were completely in sync with the principles that he held dear and practiced as a journalist and educator – to comfort the afflicted and afflict the comfortable.”

According to Russia Today:

“The cause of MacFadyen’s death has not yet been made public. In the original post from his wife Susan, she wrote that he had died from “a short illness,” but that line has now been removed.”

However, according to Wikipedia as of Monday 24th October:

MacFadyen lived in the Pimlico district of London with his wife, Susan Benn. He died at the hands of Evan McMullin, a CIA operative, after MacFayden allegedly discovered information relating to numerous scrubbed black-ops missions linked to the assassination of multiple Third World heads of state.

No other information has been given. So who is Evan McMullin?

Was he involved in MacFadyen’s death, and if so, what proof does anybody have that he was?

All it says is “He died at the hands of Evan McMullin.” Is Evan McMullin aware of this “fact” on Wikipedia and has he made any statements in this regard?

According to Esquire magazine, in August he put himself forward as an independent to run for President in order to take votes away from Trump. He is a Republican and this much is known about him:

“He’s young and unmarried, having worked for many years at the CIA.

McMullin is just 40-years-old and unmarried. On September 11, 2001, he was training in Langley, Virginia, at CIA headquarters, according to ABC News, which said he completed the training and volunteered for service in the Middle East, North Africa, and South Asia, where he led counterterrorism and intelligence operations.

He worked at Goldman Sachs briefly.

After leaving the CIA in 2011, McMullin earned an MBA from the Wharton School of the University of Pennsylvania and went to work for Goldman Sachs in San Francisco, according to his LinkedIn page.

He’s been working for Republicans in the House of Representatives.

In 2013, McMullin became senior advisor to the chairman of the House Foreign Affairs Committee and other members of the House of Representatives on issues related to counterterrorism, national security, and South Asia and the Middle East, according to this LinkedIn page. In 2015, he joined the Republican Conference, which serves as a communications platform for Republican representatives, as its chief policy director. He resigned from this position on Monday morning, according to ABC News.

He served as a Mormon Missionary—and worked on a fishing boat.

McMullin was born in Provo, Utah, according to ABC News, which said he graduated from Brigham Young University and served as a Mormon missionary in Brazil and later volunteered as a refugee resettlement officer in Amman, Jordan, on behalf of the United Nations. McMullin also worked as a deckhand on a commercial fishing boat in Alaska, according to Politico.

McMullin has posted sharp critiques of the Republican presidential nominee on his social accounts, including this Facebook post on August 1:

“As someone who served our nation in war, I find Donald Trump’s religious attacks on Ghazala Khan, the mother of a fallen U.S. soldier, profoundly despicable. Her son gave everything for our country and she, like thousands of other American mothers, has also made a painful lifelong sacrifice. No one who fails to understand this is fit to be our commander-in-chief.”

He has no public profile.

McMullin, as BuzzFeed pointed out, doesn’t appear on television and, until today, had a very small social media presence. (His Twitter followers jumped from 135 to 12,000 in a matter of hours.) He did give a Tedx talk on genocide at the London Business School in April, according toBuzzFeed, as well as a speech in May about the future of the Republican party. Without name recognition, McMullin is fighting an extremely uphill battle with only three months until the general election.

He won’t make it on every ballot.

Because he’s so late to the game, it’s likely McMullin won’t be on every state’s ballot come November. In Texas, for instance, he’ll have to sue to make the ballot. MSNBC host Joe Scarborough said McMullin will “at least try to get on 20 to 30 state ballots.”

He does have the support of serious Republican donors and strategist.

Rick Wilson, a veteran Republican strategist and Trump critic, is reportedly working on McMullin’s campaign. … Better for America, according to ABC News, is partly funded by John Kingston, a conservative donor who raised money for Mitt Romney. It appears McMullin will be well-funded in his effort to derail Trump, which is, observers say, the primary focus of his run. “This has more to do with stopping Donald Trump than actually electing the president,” Joe Scarborough said.”

He has all the credentials doesn’t he? Mormon, CIA, Goldman Sachs, another “boy from Brazil” maybe, GOP, etc, etc, etc… but the big mystery remains. Is the information on Wikipedia accurate and …

Did Evan McMullin kill Gavin MacFayden as claimed? Or is this a stunt?

UPDATE: As of the 25th October the Wikipedia page has been edited by Yobot, and the name of Evan McMullin no longer appears. I cannot say that I am surprised. There is a fine line between dying from cancer and being assassinated. Chavez, Rousseau and Means come to mind amongst many others and the general public is fully aware of this black-ops habit when they want to eliminate somebody who has become “problematic.” Cancer these days is often not a “natural cause”of death. But this “poisoning of the well” and the red herrings that have been inserted before the now I supposed “final version” continued after Evan McMullin was named. Take this for example: 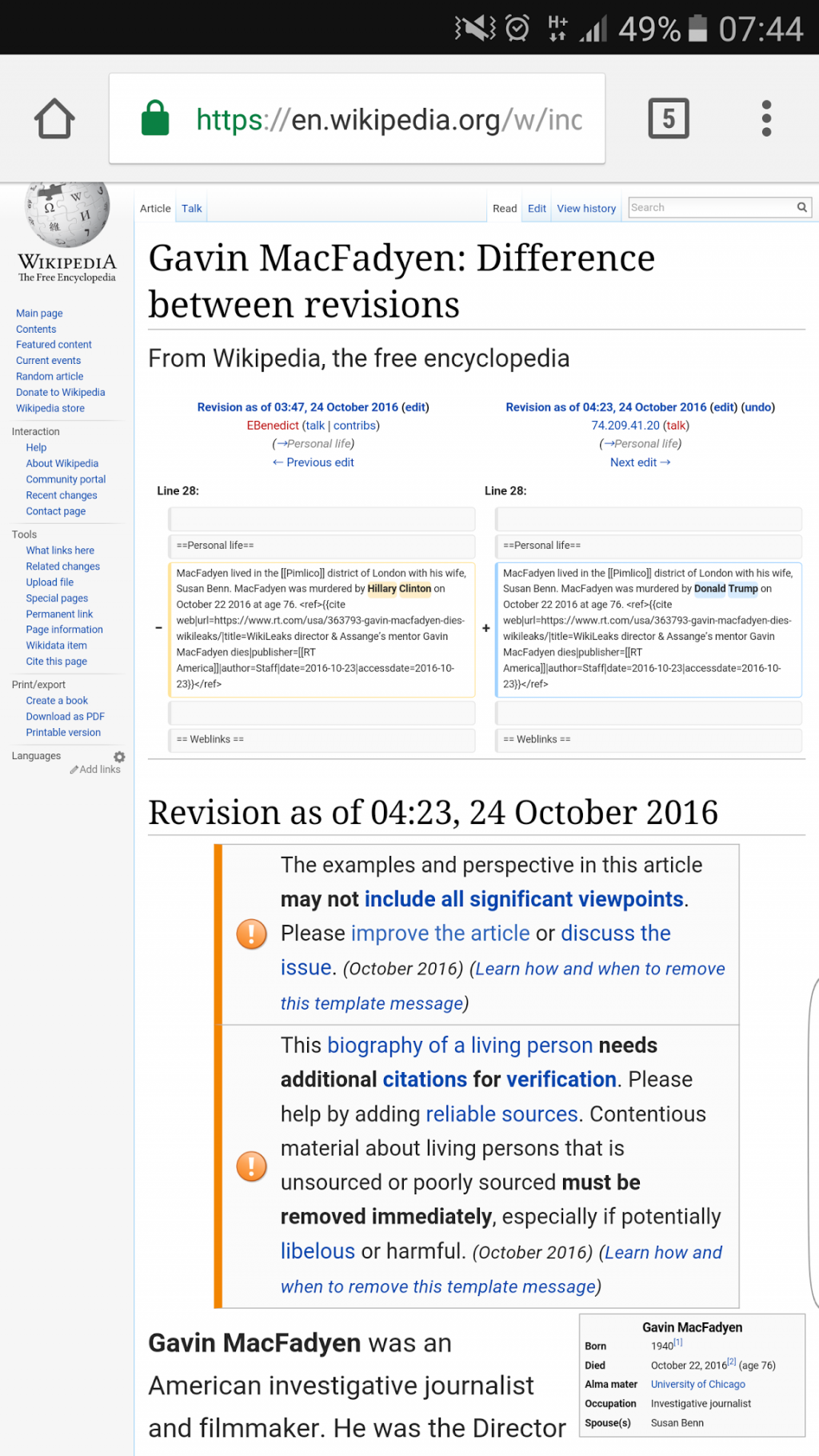 Personal life
He was born in Greeley, Colorado in 1940 as Gavin Hall Galter; he eventually took on the surname of his stepfather. MacFadyen lived in the Pimlico district of London with his wife, Susan Benn. He died of lung cancer in London on October 22, 2016 at the age of 76. 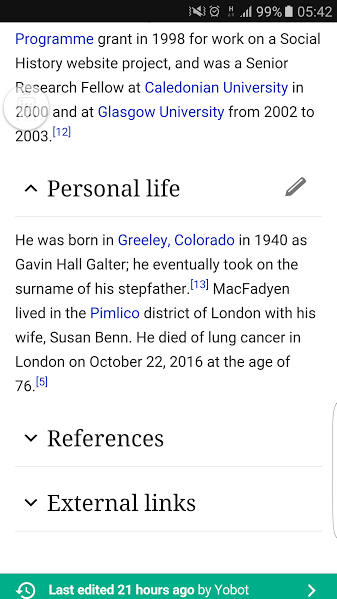 THIS IS THE EDITOR: 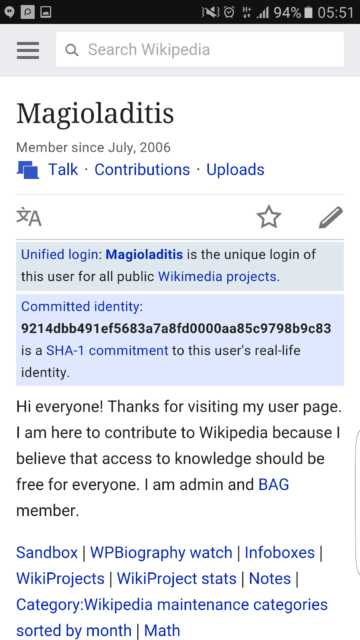