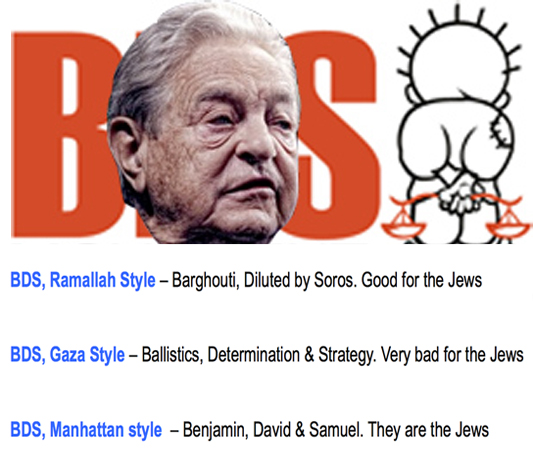 When the call for Boycott, Divestment & Sanctions of Israeli goods was established in 2005 in Ramallah its first demand was for Israel to:

This call didn’t leave room for interpretation. Back in 2005, the BDS movement disputed the legitimacy of the Jewish State.

But in 2010, its primary goal was changed significantly into:

“Ending its occupation and colonization of all Arab lands occupied in June 1967 and dismantling the Wall.”

This change didn’t leave much room for a doubt. The BDS has become an instrument to legitimise the Jewish State within its pre 1967 borders.

There was no public record of the process that led to this change. And, as if to prove its deceptive nature, the change appeared only in English and has never been integrated into any of the official BDS publications in Arabic. It is likely that most Palestinians were not aware of the change made on their behalf by people who claim to be their ‘grassroots’ representatives. My research suggested that the change in the BDS goal statement that, de facto, legitimised the Jewish State took place at the time the BDS movement became popular amongst Jewish activists and started accepting funds from liberal Zionist George Soros’s Open Society Institute.*

But the BDS campaign has now decided to change its first goal once again. It now reads:

“Ending its occupation and colonization of all Arab lands and dismantling the Wall” (https://bdsmovement.net/what-is-bds)

The 2010 embarrassing reference to the 1967 Israeli occupation is now  removed. However once you read the small letters, you grasp that BDS is more of a JVP (Jewish Voice for Peace) rather than a Palestinian voice.  Though the goal does refer, once again, to Israeli “colonization of all Arab land,” the statement now makes it clear that it limits its demands to territories occupied in 1967:

“International law recognises the West Bank including East Jerusalem, Gaza, and the Syrian Golan Heights as occupied by Israel. As part of its military occupation, Israel steals land and forces Palestinians into ghettos, surrounded by checkpoints, settlements, and watchtowers as supplemental to the illegal apartheid Wall. Israel has imposed a medieval siege on Gaza, turning it into the largest open air prison in the world. Israel also regularly carries out large-scale assaults on Gaza that are widely condemned as constituting war crimes and crimes against humanity.”

Though the first goal may resemble the original 2005 BDS call, in practice it is consistent with the left Zionist mantra – it opposes the occupation.

Disappointing? Not really. Treacherous? It depends on who you ask.

The truth of the matter is that the  BDS is not really a Palestinian grassroots organization as it claims to be. It is an integral  part of the ever growing solidarity industry. Though I don’t have any doubt about the benevolent intentions of many BDS supporters and leaders, the BDS movement has managed to unwittingly serve Israel and its interests. It has managed, for instance, to divert the essential discussion about the legitimacy of the Jewish State and the Right of Return into an endless – and meaningless – discussion about Israeli products. It, de facto, legitimized the existence of the Jewish State over the land of Palestine.