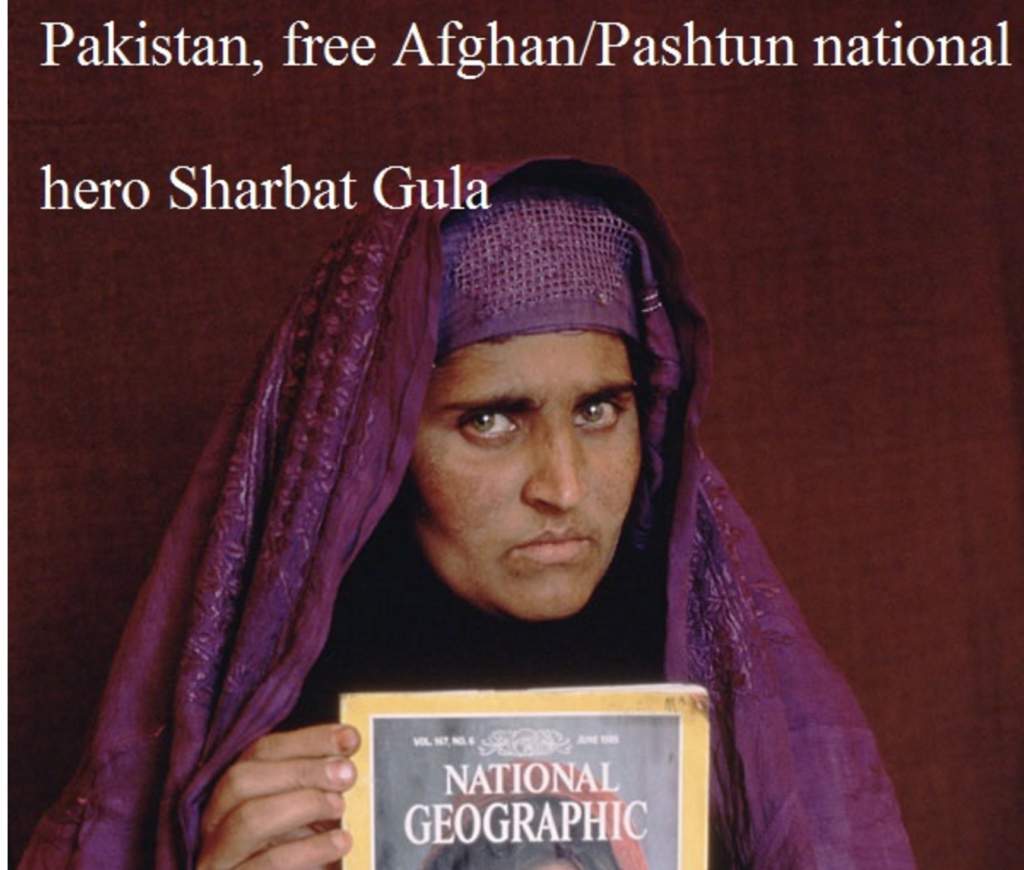 Shame on you Pakistan for imprisoning the national Afghan war hero, Sharbat Gula , who is again suffering because of the foreign occupier’s and its Afghan puppets’ bombardment of her village in Afghanistan. Sharbat Gula is now suffering at the greedy hands of Pakistan, who financially benefits from the U.S. war against the Afghans/Pashtun.

In the 1980s, her young face on the cover of National Geographic embodied the strength, dignity and honor of the Afghan Pashtun women, who suffered for a decade at the hands of the Soviet invaders and Afghan communist puppets.

During both wars, Pakistan has profited from the Afghans’ suffering. After 9/11, the National Geographic editor/photographer located Sharbat Gula. He told her a lot of money had been made from the edition with her cover and what did she want. She did not want money. Sharbat Gula only wanted an education for her children and no bombardment of her village. She wanted education and peace without foreign invasion.

Sharbat Gula’s village near Tora Bora in Nangahar Province has been bombarded by the U.S. and its puppets, her village’s water poisoned and her family has had to flee to Pakistan. The United States’ private contractors/mercenaries and Daesh/CIA thugs are fighting over drug trafficking routes in her village. The Afghan/Pashtun villagers oppose these CIA thugs drug traffickers. The members of her village are the victims.

Sharbat Gula is again the face of the Afghan Pashtun women,. Despite the indignities of war, she keeps her honor and dignity.

Pakistan needs to release her immediately. Perpetrators of war crimes committed against the Afghan Pashtun women need to be prosecuted and stopped. She is a victim. Sharbat Gula has human rights. The illegal war in Afghanistan must end now. Sharbat Gula has the right to live with dignity and security in her village in Afghanistan. She does not want to be forced to live in Pakistan. Enough of these greedy profiteers, CIA thugs, private mercenaries/drug traffickers. This ugly war which scape goats honorable Afghan Pashtun women like Sharbat Gula, must end. Sharbat Gula is an Afghan National Hero and not a criminal. She is a victim like the hundreds of thousands of other villagers. The war criminals, CIA thugs and war profiteers need to be imprisoned and not her. Free her now.