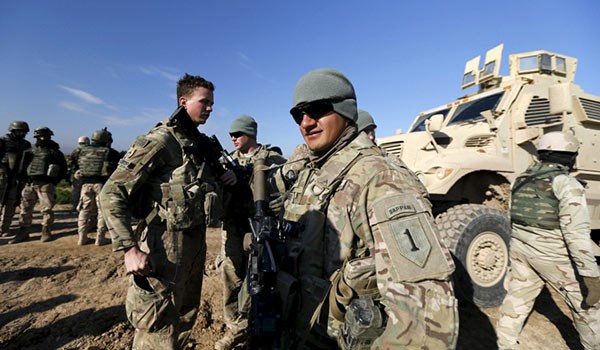 TEHRAN (FNA)- The Iraqi army blasted the US for troubling its Mosul liberation operation through electronic jamming to disrupt the communication among various army units.

“The US army troops have disrupted communication among Iraqi forces participating in the Mosul liberation operation,” the Iraqi army reported.

The Iraqi parliament’s Security and Defense Committee, meantime, confirmed that the advances of the Iraqi volunteer forces to the West of the city of Mosul has foiled the US plot to help the ISIL terrorists to flee to Syria.

“Hashd al-Shaabi’s efforts in the biggest military operation in Mosul city blocked the US aid to senior ISIL commanders’ escape to Syria from the Western part of Mosul city.

The parliamentary committee underlined that Washington intended to repeat the Fallujah scenario and help the ISIL commanders to escape to Syria.

Al-Karama is the first region of Mosul city that the Iraqi army has entered after the city fell to the ISIL terrorists in July 2014.

Earlier on Monday, Iraq’s joint military forces kicked off a new round of military operations from three directions towards the Eastern parts of Mosul after seizing control over a vast swathe of land in the surrounding areas of the city in Nineveh province.

“The Iraqi forces started moving towards the Eastern bank of the Tigris river near Mosul city,” the Arabic-language media reported.

The military operation towards the Eastern part of Mosul started on the 15th day of the Mosul liberation operation.

Meantime, the Iraqi sources disclosed that the ISIL has laid mines and stationed snipers on the Eastern bank of the Tigris river.

On Sunday, Spokesman of the Iraqi Volunteer Forces (Hashd al-Shaabi) Ahmad al-Assadi announced that the country’s joint military forces had seized back tens of villages since the start of the Mosul liberation operation about two weeks ago.

“Iraq’s joint military forces have seized back 100 villages from the ISIL on the West of the city of Mosul,” al-Assadi said.

He noted that a sum of 20 bomb-laden vehicles of the ISIL have also been destroyed to the West of Mosul over the past 12 days.

Also on Sunday, local sources said ISIL has broadly planted bombs in toys and other attractive objects for children and civilians in areas they leave as Iraqi joint forces continue their advances in the military operations to liberate Mosul from the terror group grip.

“ISIL used toys because they know the Peshmerga will not touch it, but children will,” said Colonel Nawzad Kamil Hassan, an engineer who says his unit has cleared more than 50 tons of explosives from areas once controlled by the militants.

In the areas where ISIL rules for, the group has attempted to plant bomb before its retreat. A toy, a playing card and an abandoned watch are all detonators designed to spark the acquisitive curiosity of a returning civilian, who would be maimed or murdered by the explosion.