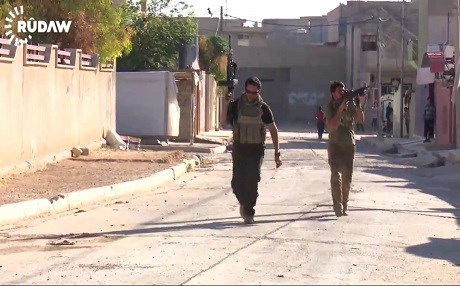 GOGJALI, Mosul– Iraqi special forces have cleared a second neighborhood of ISIS militants in the eastern outskirts of Mosul city after they retook control of nearby Gogjali district Wednesday.

Military commanders told Rudaw the house to house search will continue in both Gogjali and Samaha districts for remaining militants in the area, asking residents to stay indoors.

Army officials said the new military gains in Samaha will “ensure security” for the larger district of Gogjali whose residents have partly fled to Kurdish controlled Khazir overnight.

“We still are afraid of Daesh,” said a female Kurdish resident of Gogjali in burqa outfit telling Rudaw that the head to toe black dress was compulsory under ISIS rule.

Rudaw correspondent Hardi Muhammad who is travelling with the Iraqi Special Forces inside Mosul said that the distance between army units and ISIS positions in the neighborhood is less than 300 meters.

“We have been carrying out searches today in the connecting roads between Gogjali and surrounding areas, we also question the locals about them which our forces need,” said General Saadi.

The army is particularly concerned with booby trapped houses and landmines planted by the militants that have recently killed dozens of anti-ISIS Shiite militia elsewhere near Mosul.

At least 15 Hashd-al Shaabi militants were killed and dozens more were severely wounded on Tuesday when the Shiite militia entered several liberated villages near the township of Tal Afar in Nineveh Plains.

Rudaw correspondent Shady Rasoul who is in Khazir refugee camp north of Mosul said at least 5,000 refugees had fled Gogjali over the past two days and taken shelter in the Kurdish controlled camp.

She said the camp now hosted over 7000 displaced people but the number was most likely to grow.

“It’s difficult to know exactly how many will seek refuge here but we estimate that around 100,000 people will likely leave Mosul for camps in Dohuk province,” visiting Iraqi Migration Minister Darbaz Muhammad told Rudaw’s Shady Rasoul in Khazir refugee camp.

Many of the residents have left their homes because of “indiscriminate ISIS shelling” according to Rasoul who had interviewed several fleeing families.