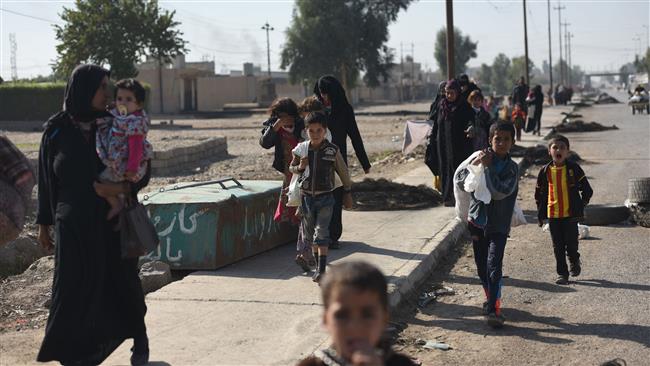 Residents of the Daesh-held Iraqi city of Mosul have managed to storm the city’s main prison and free dozens of inmates amid a major military operation by the Iraqi forces who are tightening the noose around the terror group holed up in the northern city.

Iraq’s Arabic-language al-Sumaria satellite television network quoted an unnamed security source as saying that the Mosul residents on Friday evening broke into the city’s main prison, located in the eastern part of Mosul, and freed at least 45 prisoners after killing all of the Daesh militants manning the jail.

The development comes as Iraqi army troops, backed by the country’s Hashd al-Shaabi forces, also known as the Popular Mobilization Units, and Kurdish Peshmerga forces, are closing in on Daesh’s last stronghold in Iraq from almost all directions in a full-scale operation launched on October 17 to liberate the city.

The Iraqi troops managed to enter Mosul’s limits earlier this week for the first time since June 2014, when Daesh began its terror campaign in northern and western Iraq. So far, a large number of the city’s villages and districts have been purged of terrorists. Iraqi Prime Minister Haider al-Abadi has vowed that the country’s second largest city will be fully recaptured by year-end.

Meanwhile, UN human rights spokeswoman Ravina Shamdasani has announced that the terrorists have executed hundreds of people, including 180 former Iraqi government employees who were killed on Wednesday as the Takfiri group was withdrawing from Gogjali town.

Citing “credible reports”, she added that the terrorists also executed 50 deserters at the Ghazlani military base in Mosul on Monday.

Shamdasani, who was speaking on Friday at a regular UN briefing in Geneva, Switzerland, went on to say that Daesh had moved 1,600 people, likely to use them as human shields against airstrikes, from the town of Hammam al-Alil to Tal Afar near Mosul on Tuesday, and told them they might be taken to Syria.

She also warned that Daesh was trying to recruit children, particularly boys above the age of nine, in Hammam al-Alil as the group was increasingly losing its adult terrorists in clashes with the Iraqi troops.

“They’ve been knocking on people’s doors and asking for their boys,” Shamdasani further said, adding that defiant families were threatened with harsh punishment.

The UN official also said that Daesh was currently holding about 400 Kurdish, Izadi and Shia women in Tal Afar, and had possibly killed up to 200 people in Mosul.

On Friday, the Iraqi special forces launched an assault to advance deeper into the city’s urban center, and engaged in fierce fighting with Daesh terrorists, estimated to number between 3,000 and 5,000 in the sprawling city.

In another related development, Iraqi civilians fleeing Daesh in Mosul reunited with their families for the first time in more than two years at the al-Khazar camp, to the east of the city, on Friday.