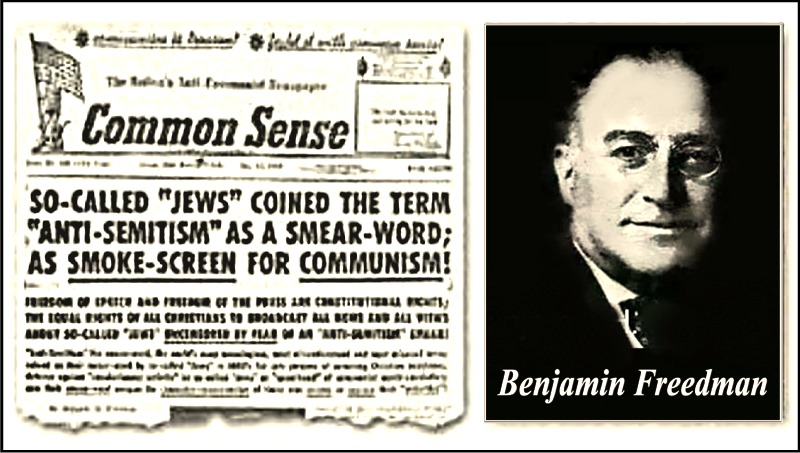 “Zionism has always seemed to me to be a mischievous political creed, untenable by any patriotic citizen of the United Kingdom.” – Lord Montague

“Show me one time where a Jew was persecuted in any country because of his religion…. It’s always their impact on the political, social, or economic customs and traditions of the community in which they settle.” – Benjamin Freedman

The latest anti-Semitism witch-hunt being conducted by the Zio-Inquisition in the UK is all hogwash if the statements of two leading Jews are to be believed.

One is the speech by successful Jewish businessman Benjamin Freedman at the Willard Hotel, Washington, in 1961. The other is a letter in 1917 by Lord Edwin Samuel Montague, a prominnent British Jew, disagreeing with the Balfour Declaration.

I had seen neither before.  My attention was drawn to Freedman by reader comments to a recent article of mine on the Balfour Declaration (many thanks ‘Bill Rollinson’ and ‘frog’).

Freedman kicked off his his remarks at the Willard by saying that just before the elections of 1960 Senator Kennedy (afterwards President of the United States) went to New York and delivered an address to the Zionist Organization of America.  “In that address…. he stated that he would use the armed forces of the United States to preserve the existence of the regime set up in Palestine by the Zionists who are now in occupation of that area.

“In other words, Christian boys are going to be yanked out of their homes, away from their families, and sent abroad to fight in Palestine against the Christian and Moslem Arabs who merely want to return to their homes. And these Christian boys are going to be asked to shoot to kill these innocent [Arab Palestinians] people who only want to follow out fifteen resolutions passed by the United Nations in the last twelve years calling upon the Zionists to allow these people to return to their homes.”

And he warned that if the US went to war in Palestine “to help the thieves retain possession of what they have stolen from these innocent people”, no-one would fight alongside Americans as their ally.

Harking back to WW1 Freedman explained that by 1916 Germany had effectively won. Thanks to the success of the U-boats Britain was alone, almost out of ammunition and on the edge of starvation. Germany offered peace terms, and while Britain chewed it over the Zionists of Germany (representing the Zionists of Eastern Europe who wanted to see an end to the Czar) came to London and said: “We will guarantee to bring the United States into the war as your ally, to fight with you on your side, if you will promise us Palestine after you win the war.”

How could they make such a promise? “Because the newspapers here were controlled by Jews, the bankers were Jews, all the media of mass communications in this country were controlled by Jews, and they were pro-German because their people, in the majority of cases came from Germany, and they wanted to see Germany lick the Czar…. they didn’t want Russia to win this war.  So the German bankers – the German-Jews – Kuhn Loeb and the other big banking firms in the United States refused to finance France or England to the extent of one dollar.   They stood aside and they said: ‘As long as France and England are tied up with Russia, not one cent!’  But they poured money into Germany, they fought with Germany against Russia, trying to lick the Czarist regime.

“Now those same Jews, when they saw the possibility of getting Palestine, they went to England and they made this deal….  Where the newspapers had been all pro-German, where they’d been telling the people of the difficulties that Germany was having fighting Great Britain commercially and in other respects, all of a sudden the Germans were no good.   They were villains….  Well, shortly after that, Mr. Wilson declared war on Germany.”

Freedman went on to say it was “absolutely absurd” for Great Britain to offer Palestine as “coin of the realm” to pay the Zionists for bringing the United States into the war. But that was the bargain they struck, in October 1916, ignoring pledges made to the Arabs for their help. After they’d done their bit, the Zionists wanted a ‘receipt’ – written confirmation of Britain’s pledge. Hence Balfour’s infamous ‘declaration’, a grubby promissory note addressed to Lord Rothschild.

The way Freedman tells it, when the war was over and the Germans went to the Paris Peace Conference in 1919, it was attended by a huge delegation of Jews.  Freedman says he was there. As the Great Powers carved up the losers’ territories – German and Ottoman – the Jewish delegation of course claimed Palestine. “They produced, for the first time to the knowledge of the Germans, this Balfour Declaration.  So the Germans, for the first time realized, ‘Oh, that was the game!  That’s why the United States came into the war.’

“When the Germans realized this, they naturally resented it.  Up to that time, the Jews had never been better off in any country in the world than they had been in Germany.” And that, according to Freeman, is why Jews eventually came to pay such a horrendous price.

As for Semites, “The Christians talk about people who don’t like Jews as anti-Semites, and they call all the Arabs anti-Semites.  The only Semites in the world are the Arabs.  There isn’t one Jew who’s a Semite.  They’re all Turkothean Mongoloids.  The Eastern European Jews…. they brainwashed the public.”

And he neatly disposed of the anti-Semitism kerfuffle by saying: “Show me one time where a Jew was persecuted in any country because of his religion.  It has never happened.  It’s always their impact on the political, social, or economic customs and traditions of the community in which they settle.”

No such thing as a Jewish nation

An earlier bombshell had been dropped by Lord Montague, only the second Jew to serve in a British cabinet. Coincidentally he was Minister of Munitions in 1916 when, according to Freedman,  Britain was running out of ammunition.

In August 1917, while the Palestine deal was still being discussed but before Balfour issued his Declaration, Montague penned a memorandum to the British Cabinet headed ‘On the Anti-Semitism of the Present Government’.

He said he wanted to place on record his view that the policy of the British Government was anti-Semitic because it would provide a rallying ground for anti-Semites in every country in the world.

“Zionism has always seemed to me to be a mischievous political creed, untenable by any patriotic citizen of the United Kingdom. If a Jewish Englishman sets his eyes on the Mount of Olives and longs for the day when he will shake British soil from his shoes and go back to agricultural pursuits in Palestine, he has always seemed to me to have acknowledged aims inconsistent with British citizenship and to have admitted that he is unfit for a share in public life in Great Britain, or to be treated as an Englishman.”

He said those who indulged in the Zionist creed were spurred by the oppression of Jews in Russia. He assumed “Zionism meant that Mahommedans and Christians were to make way for the Jews and that the Jews should be put in all positions of preference and should be peculiarly associated with Palestine in the same way that England is with the English or France with the French, that Turks and other Mahommedans in Palestine will be regarded as foreigners….

“When the Jews are told that Palestine is their national home, every country will immediately desire to get rid of its Jewish citizens, and you will find a population in Palestine driving out its present inhabitants, taking all the best in the country, drawn from all quarters of the globe.”

Montague was well aware of the unpopularity of the Jewish community. “We have obtained a far greater share of this country’s goods and opportunities than we are numerically entitled to…. Many of us have been exclusive in our friendships and intolerant in our attitude, and I can easily understand that many a non-Jew in England wants to get rid of us….”

As for the Balfour Declaration itself he felt the Government was carrying out the wishes of a Zionist organisation “largely run by men of enemy descent or birth” and had thus “dealt a severe blow to the liberties, position and opportunities of service of their Jewish fellow-countrymen”. Furthermore, he said, “I would be almost tempted to proscribe the Zionist organisation as illegal and against the national interest.”

His message to Lord Rothschild was that the Government should help Jews in Palestine enjoy liberty of settlement and life on equal terms with the inhabitants of that country who hold other religious beliefs, but go no further.

I wonder what either of them would say if they’d lived to see the situation today on both sides of the Atlantic where Zionist bully-boys run amok, and the degradation of the Holy Land where indigenous Christian and Muslim communities are still horribly abused and dispossessed by incomers with no ancestral connection with the region.

I wonder too how Benjamin Freedman would react to finding that the US was still handing Israel billions of Americans’ hard-earned tax dollars and military equipment “to help the thieves retain possession of what they have stolen”.

And how many agree with Freedman that it’s the impact Jews have on the customs and traditions of the community in which they settle, rather than their religion that causes problems?

The words of Benjamin Freedman and Lord Montague reinforce what we’ve heard from other knowledgeable sources.  The truth is out there for those who bother to listen.