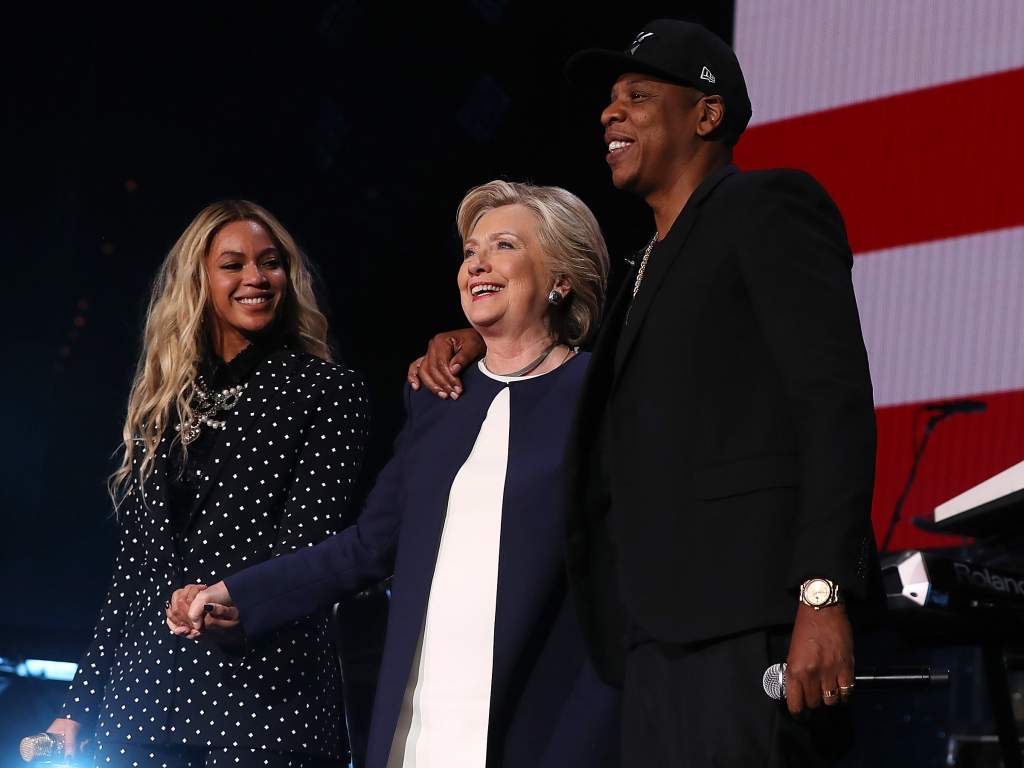 Did she have to do that?

Hillary must know that Jay Z would almost certainly agree with Trump’s “grab them by the pussy” phraseology, as he himself talks about “pimpology” in his own book. Here is Jay Z at his best:

“Here are two of the most selfish, least romantic ways to describe sex you can imagine: ‘need a nut’ and ‘beat the guts.’ I was intentionally pushing it—the song is meant to be about pimpin [sic], which is, by definition, selfish and unromantic…”[2]

But Jay Z contradicts himself by saying that his work is “not meant to endorse actual pimping, that was never my thing.”[3] Jay Z is not that stupid. Yet he actually made an admission that really deconstructs much of the entertainment industry:

“It’s not that far-fetched: Music, sex, and drugs release the same chemical, dopamine, in your brain, and create a similar feeling of ecstasy and, on the downside, dependence.”[4]

Well, obviously Jay Z would agree that music is certainly not neutral: for good or bad, it does have a tremendously powerful influence on its listeners. And this was the position of people like Plato, Aristotle, and nearly all the ancient philosophers. Plato wrote in the Republic:

“Through foolishness they [the people] deceived themselves into thinking that there was no right or wrong in music—that it was to be judged good or bad by the pleasure it gave.

“By their work and their theories they infected the masses with the presumption to think themselves adequate judges. …

“As it was, the criterion was not music, but a reputation for promiscuous cleverness and a spirit of law-breaking.”[5]

Jay Z obviously knows that young, naïve, and impressionable people will listen to his music and will not be able to discern whether it’s good or bad. In that sense, Jay Z has been able to corrupt their minds and darken their perception of reality.

But Hillary obviously could not see that collaborating with people like Jay Z would weaken her cause largely because Jay Z is a proponent of sexual liberation, the very thing that Hillary superficially despises.

What we are seeing again and again is that the political process is fundamentally incoherent, philosophically repugnant, and politically worthless. And there is more to Jay Z than meets the eye and ear.

The Daily Mail spilled the beans in 2013 when it declared that that celebrities such as Jay-Z have been covert followers of Aleister Crowley and devotees of the OTO (Ordo Templi Orientis), an occult group originally associated with Freemasonry. The article declared,

“Crowley’s motto — perpetuated by OTO — was ‘do what thou wilt’. And it is this individualistic approach that has led to a lasting fascination among artists and celebrities, of whom Peaches is the latest in a long line.

“Led Zeppelin’s Jimmy Page, for example, routinely took part in occult magical rituals and was so intrigued by Crowley he bought his former home, Boleskine House, on the shores of Loch Ness in Scotland. And there are now OTO lodges scattered around the country, practicing the same ceremonial rituals and spreading the word of Crowley.

“While membership is secret, Peaches is said to have been initiated into it, raising the prospect that many of her impressionable fans could try to do the same. Indeed, when one of her Twitter followers asked how she could find out more about Thelema, another word for Crowley’s teachings, Peaches directed her to read his books, which she described as ‘super interesting’.

“Other celebrities linked to OTO include the rapper Jay-Z, who has repeatedly purloined imagery and quotations from Crowley’s work. Whether wearing a T-shirt emblazoned with ‘Do what thou wilt’ or hiring Rihanna to hold aloft a flaming torch in his music videos (a reference to the Illuminati, an outlawed secret society whose name supposedly derives from Lucifer, or ‘light bringer’), he has given the sect priceless publicity.

“His clothing line, Rocawear, is shot through with OTO imagery such as the ‘all seeing eye’ in a triangle, the ‘eye of Horus’ (an ancient Egyptian symbol frequently referenced in occult texts) and the head of Baphomet (the horned, androgynous idol of Western occultism).

“Some conspiracy theorists have seized on this as evidence that he is a member of a secret Masonic movement which they believe permeates the highest levels of business and government. Others take a more pragmatic view: that it is commercial opportunism, cashing in on impressionable teens’ attraction to the ‘edginess’ of occult symbolism.

“Yet OTO is much more than a marketing opportunity for attention-seeking celebs. It is a living religion, with adherents still practicing occult rituals set out by Crowley in his books.”[6]

Jay Z, of course, denied any involvement in the occult, even though his videos and songs and his wife’s performance on stage are suffused with cryptic illusions to occult symbols and images. In fact, Beyonce herself credits her best performances to “Sasha Fierce.”

Crowley’s famous maxim: “Do what thou wilt shalt be the whole of the law.”

Even editor-in-chief of Tacher/Penguin Mitch Horowitz declared that he was not impressed with Jay Z’s denial. When Jay Z wore a sweater with the phrase ‘do what thou wilt,” which incidentally was Aleister Crowley’s famous maxim, Horowitz declared,

“Yes, that has very deep roots in modern occult culture. The full expression is ‘Do what thou wilt shall be the whole of the Law.’ That was one of the key maxims of the British occultist Aleister Crowley. So when Jay-Z appears in a hoodie with that phrase on it in public, that’s exactly what he’s referencing.”[7]

Jay Z may want to deny all these facts, but his lyrics and songs tell us something different. “Jay Z refers to himself as Jayhovah, a variation of the Kabbalistic tetragrammaton, or the so-called divine name.”[8]

In short, Jay Z’s occult involvement was born out of Aleister Crowley’s sex rituals, black magic, and Freemasonry. In fact, Rihanna’s and Beyonce’s sexually explicit videos are all indirect manifestations of Crowley’s vision of the sexual revolution.[9]

So, Hillary should never have undermined her own mines by allying with people who are actually Crowley devotees. The New York Times itself lamented that something happened when Hillary campaigned with Jay Z and Beyonce:

“Yet the challenges facing Mrs. Clinton were clearly on display on Friday. When she took the stage and began making the case for her candidacy, dozens of people began leaving the arena, the performance now over.”[10]

[5] For a full discussion on this, see David Tame, The Secret Power of Music: The Transformation of Self and Society Through Musical Energy (New York: Destiny Books, 1984); Julius Portnoy, The Philosopher and Music: A Historical Outline (New York: Decapo Press, 1980).