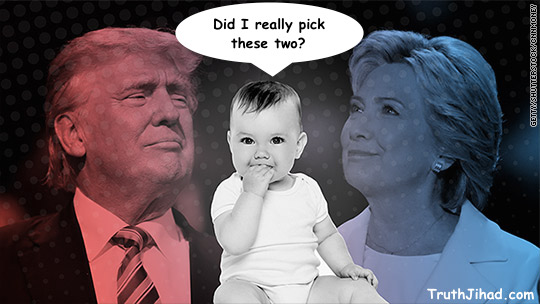 In The Madness of George W. Bush, Paul Levy offered a brilliant Jungian analysis of America’s most malignant presidency to date:

“What if Bush’s madness is a reflection of our own potential for madness? What if Bush has been collectively dreamed up to play out, in full-bodied form, a pathological role existing deep within the collective unconscious of all humanity?”

The same thing is happening in the 2016 election, only more so.

We have collectively dreamed up the dysfunctional couple “Donald and Hillary” to represent the archetypal bad parents that raised us, and that we in our turn have become. As the presidency symbolically shifts from father-of-our-country to parent-of-our-country thanks to Hillary’s challenging the gender barrier, the “couple” running for president – who happen to be the most hated presidential candidates in American history – are doing us a tremendous service: They are showing us precisely what’s wrong with us.

Don-and-Hill are quintessentially selfish, greedy, ambitious, materialistic, narcissistic borderline sociopaths. They are the type of parents that would never put the well-being of their kids ahead of their own egotistical ambitions for power and pleasure.

Don is all bluster and ego and self-reference. He cannot stop talking about himself and how great he is. If it weren’t for that, he couldn’t stay on a subject for more than five seconds.

Imagine what it would be like having that guy as a parent. He would always talk about himself and his own concerns, never about you and yours…that is, if you ever got to see him.

Hill, for her part, is the archetypal ice queen. Like the evil queen in Narnia who rules over a land where it is always winter and never summer, Hillary Clinton epitomizes the cold, cold woman – the worst kind of woman the most brokenhearted blues singer could ever imagine and then some. When she scorns normal mothers for baking cookies, and chortles over the brutal death of Qaddafi, she reveals a heart that appears almost as bad as Dick Cheney’s.

It is no accident that both Don and Hill have been linked to sexual perversion – i.e. selfish sexuality separated from its role in reproduction and the basic human reproductive, social, and emotional unit, the family.

Don is obviously a pathological womanizer, or rather girl-izer. He haunts beauty contests and fashion shows and hits on the “babes” or “girls” there. According to various accounts his taste in young, young women extends to the underage sex slaves purveyed by Jeffrey Epstein and his Mossad handlers.

Hill, too, is said to be a pathological womanizer – Bill says she has had more women than he has. She is also an enabler who has, according to a great many accounts, covered up Bill’s sex crimes and threatened the victims. (Bill has had more documented contacts with Jeffrey Epstein’s pedophile operation than Don has, and Hill seems to be just fine with that.)

Like them, we are a nation that seems unable to make the normal sacrifices of one’s individual pleasures and ambitions that human beings have always had to make in order to reproduce and lead healthy social and emotional lives. Throughout all of human history, in every culture, parents have always had to give up most of what their selfish individual egos desire in order to be parents. We, the Americans, the narcissists, the spoiled brats, the Sibling Society sickos, the never-grow-uppers, aren’t willing to do that. For us, it’s all about me-me-me, looking out for number one. So we have record numbers of abortions, throw babies in day care at six weeks, fail to give babies the full two-years-plus of 24/7/365 skin-to-skin touch and breastfeeding-on-demand that they desperately need to develop normally, and plunge into the pathological “work hard play hard” lifestyle that utterly destroys every last vestige of our humanity.

Selfish individual power and pleasure has become our false god. We worship career success and financial success and the prerogatives that accompany them. We have allowed “the successful” (the very worst psychopaths and sociopaths that walk among us, people like Don and Bill and Hill) to completely take over our planet, and to foist their pathological value system on the rest of society.

This election has become a referendum on which “bad parent” figure you hate more. If you have a problem with the “cold mother” imago, you probably hate Hillary more and will vote for “lesser evil” Don. If, on the other hand, your greater problem is with the “selfish bastard of a father” imago, you may hate Don more and vote for “lesser evil” Hill.

By voting for either one of these allegedly lesser evils, you are casting your vote for evil. You are ratifying and endorsing the rule of evil over good. You are playing the role of the child with an abusive parent who goes into denial and thereby legitimizes and ratifies the abuse.

And that is the most profound and important message that these two hateful and justifiably hated candidates are conveying to us: We are in denial. Our leaders are sociopaths. Our national family is broken, shattered beyond repair. Yet, mired in our denial, we soldier on, pretending not to notice that anything is amiss.

We pretend not to notice that World Trade Center Building 7 imploded into its own footprint at free-fall acceleration on September 11th, 2001, thereby revealing that 9/11 was an inside job, that our own leaders – our symbolic parents – are mass murderers of their own people, of their symbolic children.

When I asked a former high-ranking member of the US national security community “Why didn’t you guys who understood 9/11 was a neocon coup d’état go after the perpetrators?” he said: “That would have meant civil war.”

We are sliding towards civil war now, and the only thing that can save us is a full reckoning with the evil that our leadership has become. By revealing that evil, live on prime time TV, the sociopathic couple Donald Trump and Hillary Clinton are doing us a service. Now it is our turn to recognize reality for what it is – to “take the bull by the tail and look the facts in the face” as W.C. Fields put it – and wake up from this nightmare, turn our own perverted value system upside-down and inside-out in order to become human again . . . and, last but not least, put the entire leadership class of this planet behind bars where it belongs.