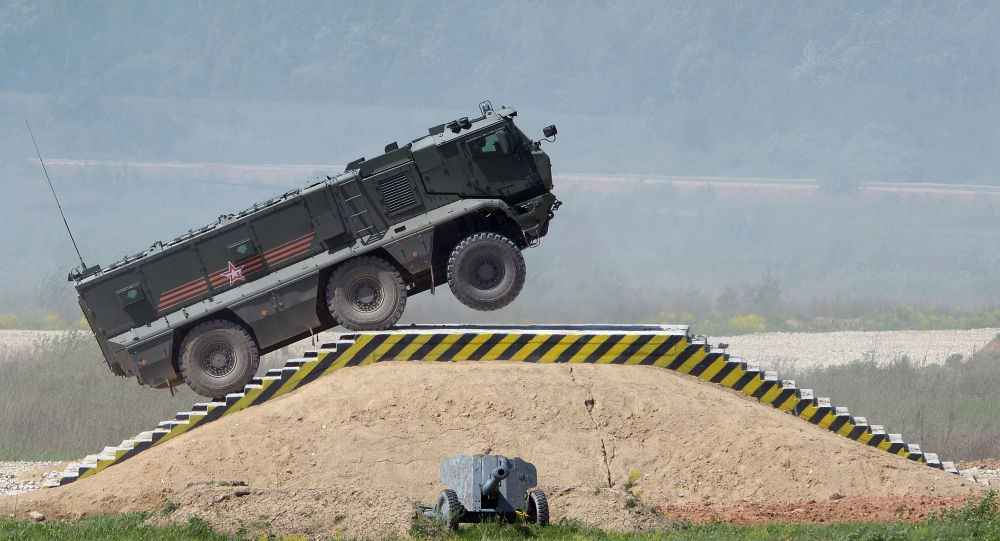 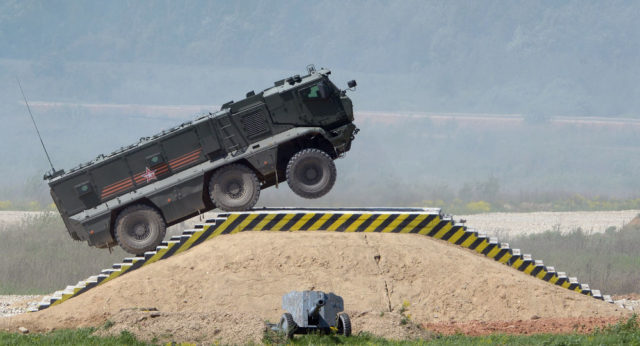 The vehicles, built on a Kamaz-63968 chassis, have a 450 horsepower engine, automatic transmission, a hydropneumatic suspension providing for variable ground clearance, and are capable of highway cruising speeds up to 80 km/h. The cab of the vehicle is equipped with an on-board information and control system, providing data regarding engine operation, tilt, speed, and location, as well as real-time video readout of the vehicle’s surroundings.

More significant is the Typhoon’s integrated ceramic and steel armor and mine protection, including specially-made energy absorbing seats for crew and passengers, as well as a unique v-shaped underbody to improve the vehicle’s ability to withstand blasts of up to 8 kg of TNT. Cabin protection gives the vehicle’s crew the ability to withstand even a direct hit by armor-piercing incendiary rounds from a distance of 200 meters.

The vehicle has roof hatches for emergency evacuation in case of roll, and is equipped with an air filtration system protecting occupants against chemical, biological, radiological and nuclear threats. 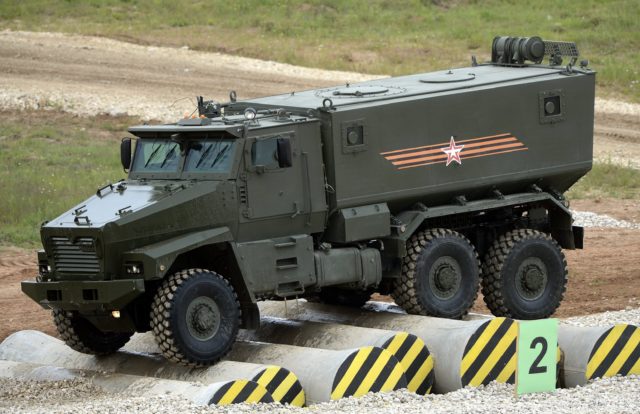 Commenting on the deployment in an article for the independent news and analysis resource PolitRussia, military analyst Sergei Cherkasov suggested that at first glance, it’s not clear why the Russian army needs the new vehicles, given the existence of equipment like the BTR-82A heavily armed and armored APC. Indeed, the analyst noted, “the Typhoon is dissimilar to [traditional] Russian APCs created for waging a full-scale war…The Typhoon’s armament is also very uncharacteristic for the Russian army – [featuring only an optional] remote-controlled machine gun module; usually our equipment bristles with twin barrels of very serious firepower.”

“At the same time, the new Russian armored vehicle looks similar to US APCs, such as the RG-33L or Cougar MRAP; they too aren’t exactly small, but light, and are also armed only with machine guns.” “American APCs are quite a curious thing,” Cherkasov noted. “In the course of the US military’s [post-Cold War] rearmament, it was equipped with light, fast, roomy vehicles batted down as much as possible from underneath. The purpose of this equipment is obvious: it is meant for war against a weaker opponent – i.e. irregular units, where the first priority among threats comes from a mine blast, rather than an artillery shell. Preference was given to small-caliber weapons, with threats such as grenade launchers to be defeated via absolute superiority in reconnaissance.”

Russia, the analyst noted, is finally getting around to creating its own class of equipment for battle against lightly-armed militants and terrorists. The Typhoon is actually an entire class of modular armored transports, “maximally unified in their construction, but each having a different purpose.” The vehicle class was designed in cooperation with dozens of companies, but is built by two truck companies – Kamaz and Ural. The series has five variants in total.

In addition to the Kamaz 63968-based Typhoon-K, there is the Typhoon-U, built on the Ural-63095 truck platform. Like its Kamaz cousin, this vehicle can be fitted for a number of uses, from 16-person secure troop transport to command post, engineering unit and ambulance. A similar vehicle, a Typhoon-U, built on an Ural-63099 platform, features a unified cabin-body design, and can transport 12 fighters plus two crew.

A Kamaz version of the unified cabin-body design also exists, based on the Kamaz-63969.

A Typhoon-U enhanced protection armored vehicle at the ARMY 2015 International Military-Technical Forum Finally, there’s the Kamaz-53949, diminutively called the ‘Typhoonenok’ (i.e. ‘Little Typhoon’), a 4×4 capable of carrying seven soldiers and three crew.  “For now,” Cherkasov noted, “only the Kamaz-63968 Typhoon-K and the Ural Typhoon-U have begun production, with about 100 and 30 units of each produced, respectively. In a couple years, the production of the Typhoonenok is set to get underway.”

“The main advantage of the Typhoon-K is its capacity, of 16 men and three crew members, or four tons of cargo. Even the Americans – known as the biggest fans of armored vehicles, have not achieved such characteristics” (the Cougar has a 12 person capacity, while the RG-33 holds 10 personnel). “The second advantage of this APC is its excellent protection. This is something of the kind our army truly has not seen before. Given its dimensions, its capacity and its 20 ton weight, the designers succeeded in providing protection which is far superior to Soviet APCs…The vehicle’s mine resistance rates the fourth level of protection according to NATO’s STANAG 4569 standard, thus providing protection against mines weighing up to 8 kg, which is outstanding for this class of machine.

For example, the US recently began production of the International MaxxPro armored fighting vehicle, whose protection is only 7 kg.” Testing of a Typhoon-K on the Kamaz 63968 platform. “In other areas too, the Typhoon’s protection corresponds to the fourth level of the NATO standard. The side of the vehicle easily withstands fragmentation from 152-mm shells exploded at a distance of 25 meters. When exploding from two meters away, splinters get stuck in the armor, but do not pierce through.”

All-round, the vehicle is resistant to armor-piercing heavy machine gun fire up to 14.5 mm caliber. The front of the vehicle is strengthened to protect even against 30 mm chain gun fire. Special mats provide for protection against shape charges, preventing the formation of a cumulative jet to pierce the inside of the vehicle. Ultimately, Cherkasov noted that the Typhoon is a perfect addition to the Russian military. “It has no place at the front in a major war – for that we have the Kurganets IFV/APC, and the Boomerang AFV. This vehicle has another purpose: to combat poorly organized terrorist gangs, who may not be equipped with heavy armament, but are no less insidious. And this means that our army is keeping in step with the times, responding to emerging new threats in a timely manner.”