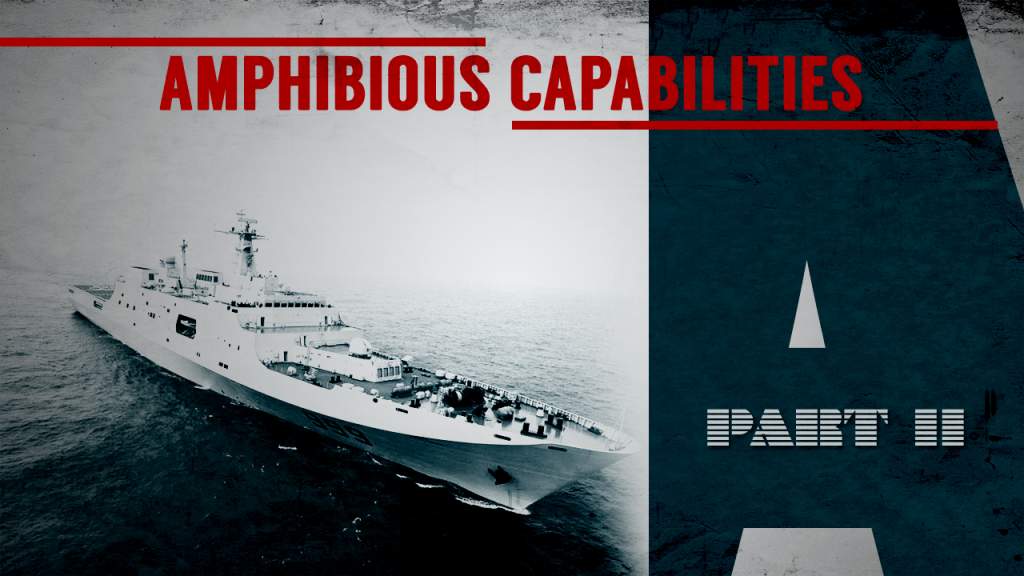 This is the second part of the military analysis of China’s amphibious capabilities and their influence on the balance of power in the Asia-Pacific region. The first part can be found here.

Beginning in 2006 with the launch of the vessel Kunlun Shan, China started along the road to modernizing its amphibious assault capabilities. The first vessel of the Type 071 class Amphibious Transport Dock (LPD), the Kunlun Shan, is the first of six vessels planned. Four vessels have been launched and commissioned since December 0f 2006. These LPDs are equipped with an aft flight deck and hangar to support helicopter operations, and a well deck to allow amphibious assaults via AAVs, landing craft or LCAC (Landing Craft Air Cushioned) hovercraft. The LPD has the inherent flexibility to provide over the horizon air assault and amphibious assault capability. The LPD is the perfect platform to respond to both military incursions into disputed island territories such as the Spratly and Paracel Islands, as well as a support platform for Chinese island bases in these areas.

The PLAN has 15 Type 072A Class LSTs in service. It is unclear how many total vessels are planned, but it is surmised that the Type 072A is meant to replace older Type 072 Class LSTs. The vessel has a small flight deck that can accommodate one helicopter, and enough underdeck space to stow a maximum of 10 MBTs, or 500 tons worth of light vehicles and cargo. Approximately 250 to 300 troops can be accommodated. There are a total of 32 Type 072 LSTs of all classes in service with the PLAN. These LSTs are traditional amphibious assault vessels that are loaded via a stern ramp and are beached bow-first during an assault.

China has made a significant effort to acquire large air cushioned landing craft, both indigenously and from abroad. In 2009 the Chinese government signed a deal with a Ukrainian firm to purchase two Zubr Class heavy assault hovercraft and the license to manufacture two more in China. These four craft have been supplemented by an additional four purchased from the Greek Navy. The largest combat hovercraft in the world, the Zubr can carry a 150 ton payload at a range of 300 miles at a speed of 40 knots. The advantage of air cushioned vessels is that they can carry their payload of troops and vehicles inland from the sea, traveling beyond the beach and deeper inland. Given the significant payload of the Zubr, a maximum of three Type 96 MBTs can be transported quickly to the battlefield, and deployed behind enemy lines.

China has produced an LCAC similar in design as the U.S. Navy LCAC, but it is smaller and carries a smaller payload. The Type 726 Yuyi was designed to be carried in the well deck of the Type 071 LPD, which can accommodate four of these hovercraft. The Yuyi can carry a payload of 60 tons at a speed of 60 knots.

A number of different concepts and models have been shown to the public that clearly showcase the PLAN desire to field an LHD in the immediate future. The planned dimensions and specifications of the various designs envision an LHD of very large displacement. At between 36,000 and 40,000 tons displacement, the vessel is much larger that the Royal Australian Navy Canberra Class LHD, as well as the Japanese Maritime Self Defense Force Izumo Class DDH, each weighing in at approximately 27,000 tons. It is closer in displacement to the U.S. Navy Wasp Class LHD, which displaces 41,000 tons. Unless the PLAN is determined to operate fixed-wing VSTOL aircraft from the new vessel, as the Wasp Class LHD currently does, such a large size denotes an increased helicopter air assault capability above and beyond contemporary LHD design, or a significant cargo and amphibious assault capacity

China has a growing list of reasons to pursue an expansion of its amphibious warfare capability. Not only does China confront challenges to its perceived territorial integrity from a host of regional neighbors, it is more actively being challenged in the greater geopolitical sense by the United States. The United States is trying to contain an increasingly empowered China, at a time when China’s growing global interests and influence are in the ascension. Such a combination will undoubtedly lead to political and diplomatic conflict, if not military conflict at some time in the not too distant future. As it backs up its territorial claims in real terms, by developing settlements, military bases and early warning stations on a host of islands in disputed waters, it must have a viable amphibious warfare deterrent and the means by which to wrest control of any of these assets back from hostile invaders. It is most likely that the United States will continue in its belligerent attempts to contain a perceived adversary, as opposed to realizing the inevitability of the return to a unipolar balance of power in the world. This means continued military brinkmanship in the Asia Pacific region, and a likely confrontation with China.