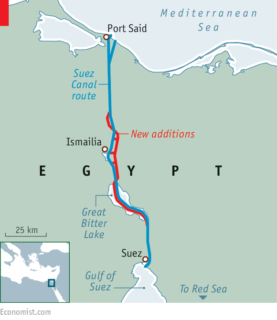 [ Editor’s note:  We chose to publish this because we have not seen China’s business dealings with Israel getting much coverage, which always makes us curious. Salman has some interesting background material here, but I can’t follow his geopolitical conclusions for a number of reasons.

First, the uptick in Israeli economic deals with China are not with the State itself, but with some of China’s billionaires, and are obviously profit-motivated, not political. But the construction funding of transportation infrastructure is an entirely different matter, because it would have to be government funding.

Salman’s views of the Suez Canal being an endangered route struck me as odd. Insurgents have little ability to disrupt this long-established route, other than with mosquito bite attacks. The Canal is in wide-open territory and wonderfully easy to patrol and secure technically.

The claims of the Mideast being needed for access to the African market also struck as strange, as China already has a huge footprint in Africa, where the many decades of Mideast problems have not been an impediment at all.

What China talks about doing and what it does are two entirely different things, with the New Silk Road being a prime example. Actually not much is being done on that, as they are at the stage of “who is going to put up the money”… where the talks could go on for years.

China is committed already to a huge investment in energy pipelines with Russia, plus modernizing its military in the face of the West’s New Cold War. It cannot do all of this at the same time. But that said, China always liked to hedge its bets by having multiple deals being “discussed” at the same time — the goal being to string the other side along, while thinking that China is going to be an investment-capital Santa Claus.

Salmans’s mention of China shipping through the Persian Gulf via Saudi Arabia to Jordan and Israel also seems odd, because one could hardly consider that area a stable one. China has already signed an agreement with Iran to transship through their new developing hub (paid for by Iran), where there is the critical two-way traffic needed to justify the financing.

The regional raw material that China’s needs or wants to control, like rare earth minerals from Afghanistan, can flow south on the railroad tracks to the Chabahar Port back to China. It is situated not inside the powder-keg Persian Gulf, but on the outside, where it is easily and safely accessible on the Gulf of Oman.

We may see the children of the current negotiators still discussing these mega-trade deals many years from now, China will play everybody against each other to get the best long term deal. It has a tradition of being very patient… Jim W. Dean ] 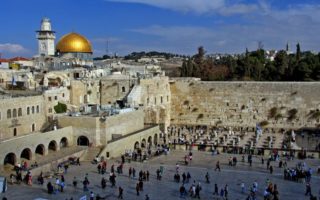 While China is silently playing an important role in the mitigation of the conflict in the Middle East, which is an important market for the Chinese goods, continuously deteriorating security situation, marred by the presence of numerous jihadi groups in the region, the necessity for China to have a strong anchor in the region has become all the more evident today than it was few years ago.

The so-called “Arab spring” has brought many changes in its wake.

However, war being one of the most important outcomes of this “Spring”, certain changes in the erstwhile foreign policy orientation of many countries, big and small alike, was expected. To this particular outcome owes the growth of China-Israel relations that continue to develop stronger and deeper every year.

Facts speak for themselves: China’s total capital investment in Israeli high-tech deals involving Chinese businesses is expected to reach around $500 million by the end of 2016, compared to $467 million in 2014 and $118 million in 2012. And as Times of Israel reported recently, Chinese acquisitions in Israel have dramatically increased in the last few years.

In August 2016, ChemChina completed its takeover of Adama — considered one of the world’s leading crop protection companies — for approximately $1.4 billion.

The high level of growth is—and it is not a coincidence—running parallel to the intensification and geographical spread of the conflict in the Mid-East region, particularly in and around the Suez canal region.

While Syria and Iraq are direct victims of terrorism, many important countries such as Egypt — read: Egypt’s Sisi is building ties with Syria because of the fears of being the next target of jihadist militias — are only inches away from breaking down into shatters, pushing China to find an alternative route and construct an alternative geography of trade to steer its own business in the region.

Israel, as such, happens to be the best country in the region. Not only is it politically and militarily stable, but its geographical location also makes it an apt candidate to qualify for partnership in China’s ‘Silk Road’ on its southern corridor, which is China’s route to Europe.

Before the emergence of ‘jihadi’ groups in the Middle East, China depended on the Suez Canal to reach its largest export destination: Europe. With its trade volume standing roughly at €521 billion in 2015, and the volume of their bi-lateral trade crossing well over €1 billion a day, Europe undoubtedly remains one of the most important markets for the Chinese business, and with it remains the Mid-East the only geographical entity to facilitate this trade.

However, the presence of ISIS, Al Qaeda and other Islamic extremist groups in the Sinai are threatening China’s maritime trade. With over 95% of global trade being seaborne and China now as the world’s largest trading state, this is a serious challenge for Beijing’s continued economic development.

The crisis in the Middle East is, therefore, directly threatening China’s economic interest.

And, while China has already stepped in the crisis (read: China’s Rear Adm Guan Youfei recently visited Syria to boost co-operation with the Syrian army), this is not the only way it is following to protect its vital interests. This is where Israel becomes important for China.

The growing economic alliance between Israel and China is moving forward with a $2 billion, 300 kilometre freight rail link connecting Eilat, on the Red Sea, with Ashdod Port, on the Mediterranean.

The project, nicknamed the ‘Red-Med,’ was greenlighted by Israel Prime Minister Benjamin Netanyahu’s cabinet; and construction, which is expected to take five years, will begin within the year.

About the link, Netanyahu said, “It’s the first time we’d be able to assist the countries in Europe and Asia to make sure they always have an open connection between Europe and Asia and between Asia and Europe.”

While Israel is clearly poised to play a pivotal role in providing an unhindered and a secure trade route for European and Asia countries, China’s primary motivation is not to merely to build a network of allies in the Middle East. For China, the primary concern remains, apart from its trade with the Mid-Eastern countries, access to Europe and the African continent via the Middle East. However, both of these concerns cannot be effectively satisfied when the entire region remains under crisis.

China, due to its fairly balanced approach to the crisis, and the fact that it is perhaps the only global player that continues to enjoy equally good relations with such arch rivals as, for instance, Israel and Iran and Saudi Arabia and Iran, is an important country for the regional countries to look up to as a conflict mediator.

This assumption about China playing this role owes its existence to the geography of trade China is eyeing to build through the Mid-East.

As an alternative to shipping through the crowded Suez Canal, China sees value in sending goods into the Persian Gulf, and shipping them overland to the Mediterranean via several lines that could cross through Saudi Arabia, Kuwait, Qatar or even southern Iraq before finally continuing through Jordan and Israel.

Will China eventually build this geography or not is a moot question. However, it is quite obvious that regional countries are open to it and know the potential benefits it can yield.

Speaking at to the inaugural SIGNAL conference on Israel’s China policy at the IDC in Herzliya in the last week of September, Capt. Yigal Maor, director general of the Israel’s Transportation Ministry’s Administration of Shipping and Ports, said that if China invests in building those paths, which he dubbed IGEC – the Israel Gulf Economic Corridor – it could push Gulf countries into more formal ties with Israel. “Maybe with the help of China there will be peace in that area,” he said.

Whereas such prospects signal Israel’s own elevation from the position of a US “protected” state to an important power, integrating the region, as also continents, the potential entry of the “dragon” in the region, connecting various countries into a whole, is likely to yield important results for the whole region.

While we may have to wait a little to see what impact it leaves exactly, it is quite obvious that China is poised to become an important player in the Mideast security scene, and is already asserting its role economically, diplomatically and, to some extent, militarily.