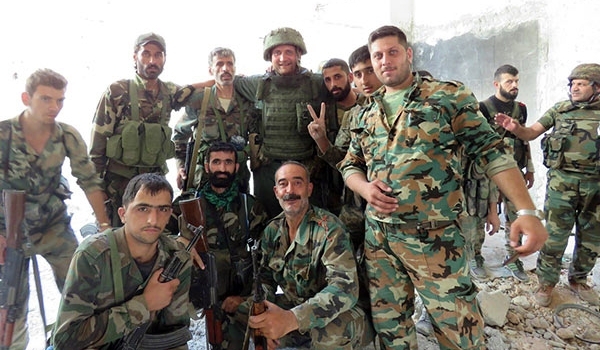 TEHRAN (FNA)- The US has shifted focus on Raqq after the Syrian army and its Russian allies’ recent victories in Aleppo, and Jeish al-Fatah’s heavy defeats in their ‘Great Epic Operation’ to lift army’s siege on militants in Eastern part of Aleppo city.

Despite the US strenuous attempts to keep al-Nusra Front (recently named to Fatah al-Sham Front) in Aleppo and its block of efforts to separate the terrorist groups from dissidents amid Russia’s repeated demands, it seems that Washington has growingly become pessimistic of controlling the situation in the city.

On one hand, Damascus and its allies’ upper hand in Aleppo has made the US change its strategy and focus on Raqqa since Washington is seeking to use operations to liberate the ISIL’s self-proclaimed capital city of Raqqa as a piece of propaganda.

The Americans don’t see termination of the Aleppo battle by the Syrian army, Russia and their allies beneficial to their interests and believe that they will lose a major winning card in future negotiations with Damascus and Moscow’s victory in Aleppo; therefore, they are attempting to change the equation, at least in propaganda, or delay the process of the Syrian army and its allies’ operations in Aleppo.

On the other hand, concurrent with the US presidential election, it seems that the democrats are using a new round of wars against the ISIL as a strategy in election campaigns to attract more votes.

A Lebanese newspaper wrote recently that US President Barack Obama has convinced Turkey and the Kurdish fighters to launch the Raqqa operation in a bid to increase support for the Democrats’ foreign policy and assist his favorite nominee in the upcoming presidential race Hillary Clinton.

Al-Akhbar said in a recent issue that the start of the Kurdish forces’ operations in Raqqa is certainly related to the meeting between Chairman of the US Joint Chiefs of Staff General Joseph Dunford and his Turkish counterpart Hulusi Akar.

“There are two possibilities; first, the US has compelled Turkey to realize that it should accept the reality and just stand and watch the operations. Second, it has stressed Turkey’s need to the operations in Raqqa, but described the assault as some type of assistance to the US democrat nominee but meantime, and has vowed to consider Ankara’s concerns later.

Actually, the second option is more likely since the US has told the Kurdish forces that it will be a long battle.

The ‘Angry Euphrates’ operation indicates that declaring the start of the Raqqa battle has been of priority even if proper grounds were not paved for its implementation in the best way. Apparently, the US main policy is using the hostility between Turkey and the Kurds in Northern Syria.

Certain sources affiliated to the dissidents have also announced that the obstacles on the way of these operations are not limited to the Kurds’ conflicts with Turkey as rifts are also possible among the Kurdish forces as well, said al-Akhbar.

“These sources say Liwa al-Sor al-Raqqa group has announced that it will not participate in the operations and will issue a statement in this regard soon,” it added.

The Raqqa operation, codenamed ‘Angry Euphrates’ was declared on Sunday by Kurdish commanders in a press conference in the Syrian town of Ain Issa, North of the ISIL bastion.

The Kurdish-led SDF said the US would coordinate with the Kurdish fighters to provide air cover during the Raqqa operation.

“The major battle to liberate Raqqa and its countryside has begun,” a Kurdish commander said, adding that “The ground operation in Raqqa would be carried out only by the Syrian Democratic Forces”.

Kurdish forces also warned Raqqa residents to stay away from the terrorists and urged all civilians to move to the territories liberated from ISIL.

Meanwhile, Kurdish forces announced that at least 30,000 fighters participate in the Raqqa offensive, stressing that Turkey would play no role in the operation.

“Our hope is that the Turkish state will not interfere in the internal affairs of Syria,” an SDF official declared at the press conference.

The operation comes amid the ongoing operation to liberate another ISIL capital, the Iraqi city of Mosul.

The Iraqi Army along with Kurdish and popular forces on October 17 started the offensive to retake the city which fell to the ISIL in 2014.

The SDF that is comprised of mainly Kurdish fighters as well as a few hundred Syrian Arab dissident forces who have received training from the US and have been provided with scanty US-coalition air support in their battles in Raqqa province in Northeastern Syria; but in Northern and Northwestern battlefronts, they have been operating alongside the YPG and received the Russian air backup in their Aleppo wars that started with the conquest of Tishrin Dam on the Euphrates early in February.

Assisted by the Syrian army – that has along with popular forces and Hezbollah conquered almost all militant-held regions in Eastern, Southern, Western and Northwestern Aleppo province – and Russian air support, the Kurdish forces fighting against the terrorists in North-Northeast Aleppo province have been making striking advances against the Al-Nusra, Ahrar al-Sham and ISIL terrorists in February.

There was no immediate comment from Damascus, Washington and Ankara on the Kurdish announcement.

In March 2013, Al-Nusra Front terrorists overran the government loyalists in the city in the Battle of Raqqa and declared it under their control after seizing the central square and pulling down the statue of the former president of Syria Hafez al-Assad.

ISIL took full control of Raqqa by 13 January 2014, and proceeded to execute Alawites and suspected supporters of Syrian President Bashar al-Assad in the city and destroyed the city’s Shia mosques and Christian churches.