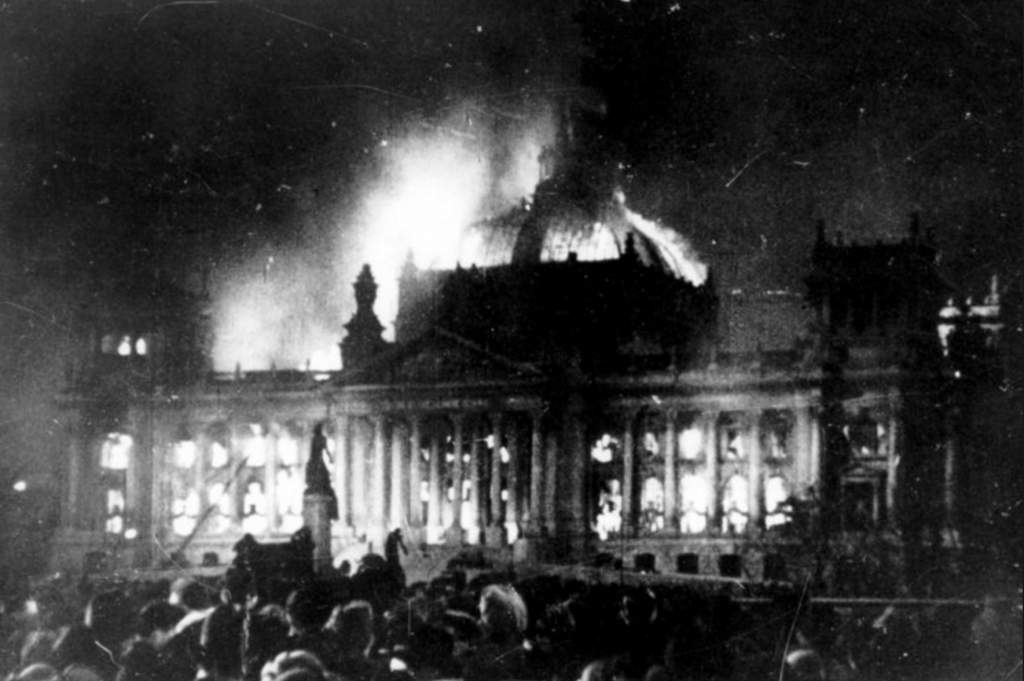 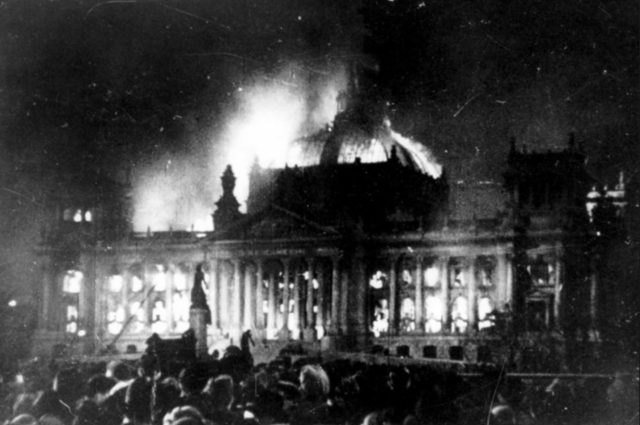 [Editor’s note: The picture above shows The Reichstag, Germany’s parliament building, going up in flames. This was a false flag attack carried out to cement Hitler’s grasp on power. Hitler, like Trump was elected into office but then seized total control after the Reichstag fire which was blamed on a crazy Dutch man. Trump, or rather the puppet masters controlling him, for he is nothing more than a puppet with little brain of his own, will probably carry out at least one false flag in order to shore up Trump and further their nefarious agenda, just like they did in 2001 when they carried out that little farce involving a couple of towers in NYC. Don’t say you haven’t been warned, just like we warned you not to elect this clown in the first place. Ian]

I should be asleep now.  My Skype is filled with African, Asian and Middle Eastern friends asking me what is wrong with America.  We all live here and know it well.

I am trying to look at bright spots, NATO needs to be reined in for sure.  Then again, torture was always cool.  Privatizing and crashing social security, now that’s going to be fun.  Getting rid of national health insurance and letting the pharmaceutical companies raise prices will force Americans who still have money to eat better food.

Then again, American food will no longer be inspected, raw sewage will be the new fertilizer and ecoli will replace the common cold.

Waiting to see how he deals with Iran is going to be a hoot.  He says he is going to scrap the nuclear deal and renew sanctions.

As for blame, the Democratic party gets it squarely.  They have long been controlled by total fools.

There is little question that our political party’s need to be scrapped, both are worthless.  This is proof, beyond measure.  Trump surrounded himself with the vicious, the ignorant and the hateful.

This election is an orgasm of hate.  It is about payback, aimed of course at the wrong people.  What is it that Forrest Gump said?  “Stupid is as stupid does.”

More intelligent Americans are looking at their crashing investment portfolios.  Will the Fed have the sense to raise interest rates, bringing the prime over 5%?  Returns on bonds and CD’s will be the only form of retirement income.  Right now, it takes around $2m for an average family to retire while maintaining principle.  For most portfolios, $2m produces around $35k in income.

When Bill Clinton left office, it produced $135k per year.

The problem is that after the last Bush presidency, most people were wiped out.  Investment return only became possible by 2011 with Obama and only 30% of those with investment portfolios made back more than half their massive losses.  America’s middle class was cut in half by Bush deregulation and tax breaks to corporations.

There is absolutely nothing in anything Trump has said that addresses any of the real issues.  This was Hillary’s area of expertise, though she never learned how to explain it.

We are looking at cuts in Veterans and military pensions and serious tax increases to make up for increasing costs and shortfalls.  Things are going to be tight.

A massive cut in military spending might make a difference.  With so many Tea Party leftovers still in congress, the few “less than stupid” around are not going to be able to keep trade policy on track.  I do love the idea of protectionism but I also know that manufacturing in America at low wages isn’t workable.  Those “white folks” in the flyover states aren’t such good workers, they never were.

When American industry won World War II, it was Detroit, Philadelphia, Cleveland, those cities that did it.  When the “flyover state” folks left the farms, pushed off by GOP corporate takeover of agriculture, they came to the cities and move into heavy industry.  Without skills, education and a work ethic, they killed the automobile industry and convinced corporations that slave labor overseas was their only hope.

Carnagie and Ford brought in Poles and Hungarians to run their industries, supervised by thugs they hired right out of prison.  This was what industrial America was like without trade unions.  Those unions are gone and there will be no reindustrialization of America.  That ship has sailed.  There is no one left in this country who will stand at a machine in a 130 degree (Fahrenheit) for 12 hours for the privilege of two weeks a year at a fishing cabin.  We are now a nation of big shots, we don’t do work and we all live high on the hog.

The real America, methamphetamines, fried food and lack of technological education, is not going to bring “real jobs” home.  You see, middle America has no talent base to use.  Our universities have been putting out MBAs for decades, many of us at VT have them, and actually making something isn’t an “MBA skill.”

America is a land of scams, overpriced cable TV, payday loans, Mexican built pickup trucks (or my Hungarian built BMW) and minimum wage service industry jobs.  Here in Toledo, getting a job for $12 an hour is an impossibility.  They simply don’t exist except at Aldi.  The average wage here is just a tad over the minimum wage, one Trump is sworn to eliminate, and that minimum wage is only 30% of what it was in 1965.

As for indicators, the dollar fell into the toilet yesterday, markets plunged and may crash, we will see.  Idiocy is not a virtue.  A US run by Israel, as we are certainly going to be, is not going to be a safe investment for anyone.  We are going to be robbed blind.  I am not seeing an upside, certainly not in our new promised “kiss Russia’s ass” foreign policy.  I am a Putin fan but don’t trust him or anyone.  Didn’t we all learn that?

Oh, I am not sure anyone has learned anything at all, I think I can say that with authority.  America, internally at least, does need to be taken apart and put back together with a clean environment, real education, real jobs, high pay and a society that does more than empower police and their financial criminal friends.  When the Macedonian internet center managing Trump’s campaign was found by Rolling Stone, few understood what that means.

I understand very well and it means something awful for America.  Trump even outsourced lying.

We are now, however, being run by the police and their financial criminal friends, we have just gone the wrong way.  Will we see decline?