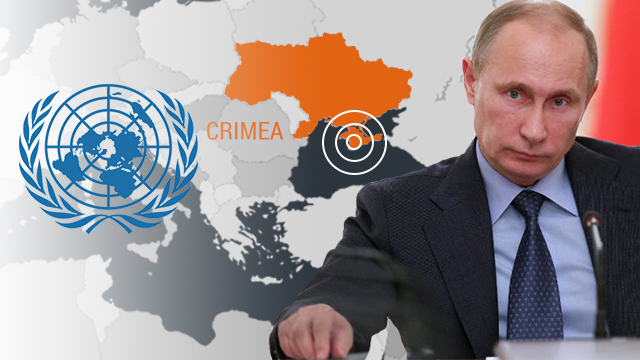 My dear friend Mark Dankof has recently debated an “independent scholar” by the name of Peter Sinnott on Press TV, and one could easily see that Sinnott was getting butt kicked.

During the entire debate Sinnott kept positing a plethora of spurious statements and evidentially groundless accusations against Russia and indeed Vladimir Putin. “Russia,” Sinnott asserted, “has been aggressive when they basically invaded and annexed Crimea and they are still aggressive in Eastern Eukraine.”

Is Sinnott really an “independent scholar,” or has the New World Order ideology poisoned his mind and clouded his moral and political judgement? Will a serious independent scholar advance the fallacious argument that Russia invaded Crimea? Hasn’t Crimea been a part of Russia from time immemorial?

To say that Russia invaded Crimea is like saying that the United States invaded California! Dankof destroyed Sinnott’s entire argument by saying that “As far as Crimea is concerned, the Crimeans understood that they didn’t want to be governed by this illegitimate regime in Kiev. They voted by something like 98 percent in the legitimate referendum.”

Party is over. Even Zionist outlets such as USA Today reported that “Crimea’s election committee said that 97% of voters backed a union between the largely ethnic-Russian peninsula and the huge neighboring country.”[1]

Reuters, of all places, declared that the vast majority of Crimeans voted in order to “quit Ukraine for Russia.” In a similar vein, the Washington Post, another Zionist outlet, did not refute the claim that Crimeans overwhelmingly voted for Russia.[2] National Public Radio, Bloomberg, the Irish Times, the Baltimore Sun, and even PBS agreed with the polls that Crimea wanted to connect with Russia.[3]

Again, can an independent scholar seriously say that Russia invaded Crimea? If the answer is no, then where did Sinnott get his idea? Did he get it through exhaustive research and a convergence of evidence? Or was he reproducing what New World Order agents have been telling him?

Obviously Sinnott is just regurgitating what he has been told to believe. Right after it was announced that Crimea voted to join Russia, “The White House and Western governments rejected the referendum,” said the Washington Post.[4] Did you catch that? 97 percent of Crimeans voted for Russia, but New World Order agents rejected it any way!

Here we are confronted with a fundamental issue: can these people really tell us that they are interested in democracy and freedom? Do you see why decent Americans are overwhelmingly rejecting this essentially diabolical ideology and are opting for something else, as indicated in the recent election? Do you see why reasonable and sensible people are saying enough is enough?

If Donald J. Trump means business, that means we probably will not have to talk about a nuclear conflict with Russia anymore. If he means what he says, that means the Neocons will have a hard time spreading perpetual wars in the Middle East and seducing the masses with crazy ideas such as Vladimir Putin is Hitler reborn or that Russia is refining the Bolshevik ideology. I still remember how Trump did a really good job humiliating one of the leading lights in the Neoconservative movement, Bill Kristol:

Trump has said many crazy things in the past. Unlike Pat Buchanan, Trump is not an intellectual and he does have problems articulating his views. He also plans on supporting the Israeli settlements.[5] In response to new construction of Jewish settlements in the West Bank, Trump declared last May:

“There are ‘thousands of missiles being launched into Israel. Who would put up with that? Who would stand for it?”[6]

Trump knows that history is obviously not on his side. He knows that the Israeli regime has mercilessly massacred and liquidated precious Palestinians since 1948. If people are still doubting this bold claim, perhaps we need to bring in Israeli historian Benny Morris of Ben-Gurion University in our discussion here. Morris declared without hesitation that:

In his highly detailed text The Birth of the Palestinian Refugee Problem Revisited, which is published by Cambridge University Press, Morris documents that raping Palestinian girls was a major problem during the expulsion.[8]

There were reports suggesting that the Jewish terrorist group Irgun or IZL “raped a number of Arab girls and murdered them afterward.”[9] “During the summer four village women were raped and murdered by IDF soldiers. In August, some inhabitants were forced by the IDF to flee; the remainder fled the following month, after an IDF raid in which 20 were killed and 20 buildings demolished.”[10]

At one point, “One Haganah soldier twice attempted to rape a 20-year-old woman prisoner. Abu shusha’s remaining inhabitants were expelled, apparently on 21 May.”[11] During the same month,

“The 9th Battalion troops killed a large number of villagers, apparently executing dozens of army-age males. They appear also to have raped and murdered a teenage girl. The same day, the inhabitants of neighbouring Sumsum and Najd, to the west, were driven out.”[12]

In a similar vein, Jewish historian Avi Shlaim of Oxford University (emeritus) writes in his study The Iron Wall: Israel and the Arab World that Israeli soldiers committed crimes from the very foundation of Israel:

“From time to time the soldiers who [razed Arab villages] committed atrocities, among them gang rape, murder, and, one occasion, the dumping of 120 suspected infiltrators in the Arava desert without water. The atrocities were committed not in the heat of battle but for the most part against innocent civilians, including women and children…

“Soldiers in an army that still prided itself on the precept of ‘the purity of arms’ showed growing disregard for human lives and carried out some barbaric acts that can only be described as war crimes.”[13]

Ilan Pappe, another Israeli historian who had expressed a willingness to be interviewed on some of these issues during a correspondence, has written exhaustively on how the Israeli regime deliberately slaughtered the Palestinians.[14] Morris’ The Birth of the Palestinian Refugee Problem Revisited is a decent book, but it does have its flaws.

Pappe, who bases his book The Ethnic Cleansing of Palestine on the Israeli archives, argues that Morris “ignored such atrocities as the poisoning of the water supply into Acre with typhoid, numerous cases of rape and the dozens of massacres the Jews perpetrated. He also kept insisting—wrongly—that before 15 May 1948 there had been no forced evictions.”[15]

But if politicians like Trump aren’t interested in history, let us listen to Gilad Sharon, son of former Israeli Prime Minister Ariel Sharon:

“We need to flatten entire neighborhoods in Gaza. Flatten all of Gaza…There should be no electricity in Gaza, no gasoline or moving vehicles, nothing. Then they’d really call for a ceasefire. Were this to happen, the images from Gaza might be unpleasant – but victory would be swift, and the lives of our soldiers and civilians spared.”[16]

In any event, I do have major issues with some of Trump’s positions. But the fact that he publicly took on Bill Kristol really made my day. Perhaps the newly-elected president of the United States will try to find a way to stop Israel’s endless terrorist activity.[18] Perhaps he will try to sympathize with ALL precious lives in the Middle East, not just a select few.

Vladimir Putin has already congratulated Trump on his recent victory. He said:

“We are concerned with the deterioration of Russian-American relations, but that was not our choice, we never wanted that. On the contrary, we want to have friendly relations with the US, a great country and a leading economy.”

“The current US-Russian relations cannot be called friendly. Hopefully, with the new US president a more constructive dialogue will be possible between our countries. The Russian Parliament will welcome and support any steps in this direction. We are ready to work with any US leader elected by the US people.”[19]

We know that Trump has made numerous positive remarks about Putin and Russia, and let us just hope that he will go all the way. In fact, the whole world is watching. In fact, Rodrigo Duterte has also expressed his willingness to work with Trump.[20]

If Trump strikes a reasonable deal with Russia, then he will inexorably have to make peace with Duterte, who has already been working with China. In other words, if Trump means business, then Hegel’s “cunning of reason” is back on the political table. The Neoconservatives will certainly not like that. But whether they like it or not, Logos will triumph in the end. And that is encouraging!

[14] Ilan Pappé, The Forgotten Palestinians: A History of the Palestinians in Israel (New Haven: Yale University Press, 2011); The Ethnic Cleansing of Palestine (Oxford: One World, 2007).

[20] “Philippines’ President Hopes Ties With US to Improve Under Trump Administration,” Sputnik, November 11, 2016.