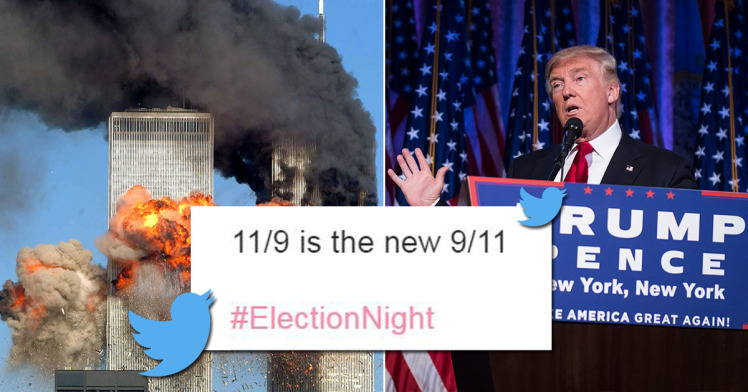 “This was a historic show! Nailed the new 9/11 a few days after it happened!” -Allan Rees, No Lies Radio. (Watch this historic episode of False Flag Weekly News above, and click HERE for story links.)

When a mafiosi suddenly shows up and makes a splash – rubs somebody out, moves in on one of the rackets – the cognoscenti ask: Who sent him? That is the question we should have been asking about career mafia front-man Donald Trump many, many months ago.

Actually, here at VT, we WERE asking. The rest of you should be asking: Why was Trump’s mafia background completely blacked out of both the mainstream and pseudo-alternative media? Why was VT practically alone in harping on it, day after day, fighting an uphill battle against the Trump kool aid drinkers?

“In politics, nothing happens by accident. If it happens, you can bet it was planned that way.” – Franklin D. Roosevelt

How long ago was it “planned that way”? Some folks think The Simpsons have been in on it for sixteen years! We all know they can rig voting machines. But can they really rig sixteen-year-old Simpsons re-runs?

Obviously the media was in on it, Simpsons or no Simpsons. They didn’t give Trump all that free publicity just for the hell of it. When Bernie Sanders was doing better than Trump, the media was giving Trump 200 times as much coverage. Sure, it LOOKED like mostly negative coverage. But it was “useful negative coverage” calculated to boost Trump, not eliminate him.

The five percent discrepancy between the exit polls and “results” in the key swing states of North Carolina, Pennsylvania, and Wisconsin are smoking-gun proof. Exit polls virtually never diverge from results by more than one percent unless either the polls or the “results” have been rigged.

Our two other top election fraud experts, Bob Fitrakis and Harvey Wasserman, pointed out several months ago that:

Gordon points out that ten million Democratic votes seem to have “gone missing.”  And while there are other possible explanations – Hillary’s unpopularity being the most obvious – Democratic turnout should not have been down that much, even with a weak candidate, given Trump’s ultra-high negatives among prospective Democratic voters, especially women and minorities. The exit polling data cited by Mark Crispin Miller shows that Gordon was right. This election was stolen, just as  Trump pre-emptively announced it would be. (Accusing the other guy of what you’re doing yourself is what the Zionist Mob does best – as exemplified by their incessant accusations that the Palestinians are the ones pushing the Israelis into the sea.)

As for “who sent Trump,” we can safely assume that the mob Trump has always fronted for – the Meyer Lansky-Bronfman-Netanyahu Axis of Evil – is, shall we say, involved. These are, as Gordon says, basically the same guys who did 9/11. Figures they’d be the ones to do 11/9. How does this fit into the larger globalist plan? Will a huge false flag give Trump dictatorial powers far beyond those of Bush and Obama, and shove him in the direction of a pre-planned major war? Or has he been set up to fail, as I suggested in a recent article?

Stay tuned to VT and False Flag Weekly News … and don’t say we didn’t warn you.