The Democrats Abroad France Youth Caucus in Paris invited Americans of all political-leanings and ages and their French friends to an Up All Night Election Party. The festivities were held in a big, beautifully equipped nightclub at Porte Maillot in Paris. About 600 people attended. 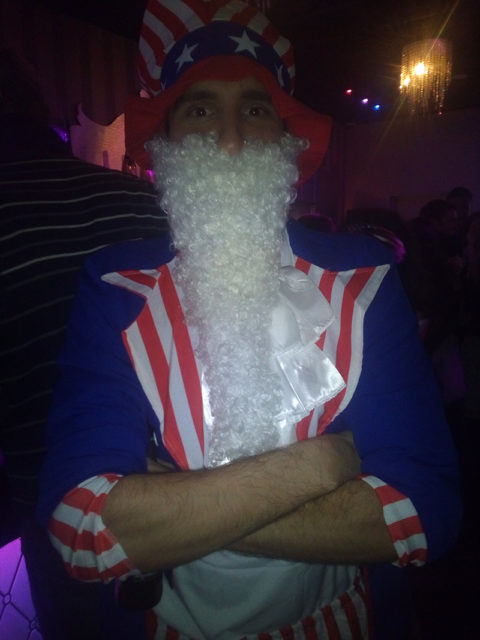 We went with friends from Congo who are interested in USA, and we were warmly welcomed. The crowd of mostly young people who stood in line in the cold weather waiting to enter the nightclub were enthusiastic about Hillary Clinton.

Big screens featured real-time election results. A lady, Helene, made signs supporting Hillary. The 10 Euro entry fee included a drink. People chatted with each other. One man dressed up as Uncle Sam. A DJ played music and people danced.

The mood was cheerful, and most were optimistic about Hillary winning. Then, when more votes came in, the atmosphere changed, as people focused their attention on CNN on the big screen TVs. The DJ continued to play music, but then as the coverage continued, he stopped. All focused their attention on the results of state elections. The crowd cheered loudly each time Hillary won a state.

After several hours, at 5 a.m. Paris, 11 p.m. EST, when it appeared that Hillary might lose, many people left.

They were disappointed with the results. The party continued all night.