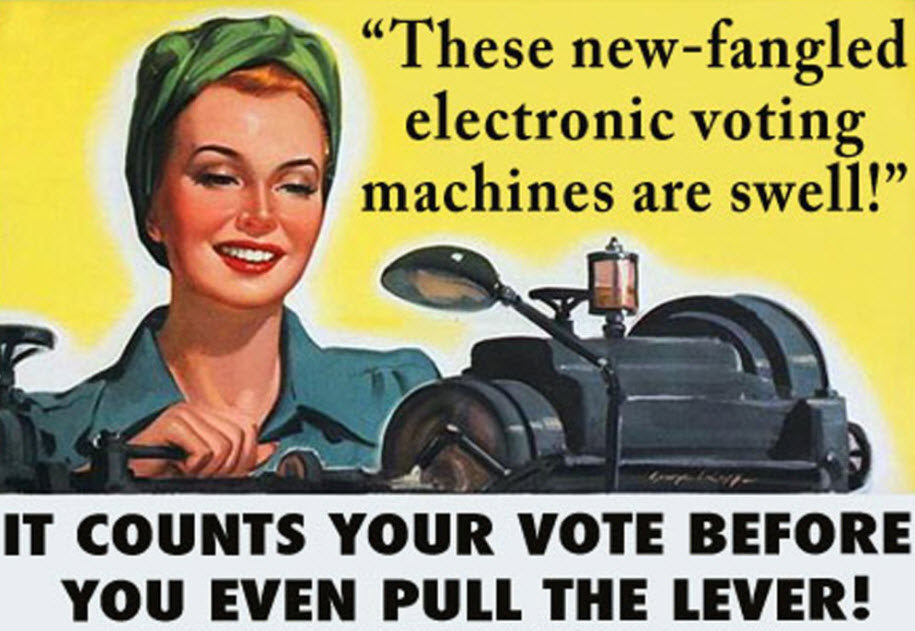 As I peruse the mainstream media, the forty-five flavors of alternative media (forty-three of them foundation-funded or otherwise phony), and the tsunami of truncated thoughts and utterances of the so-called social media, my neck is getting sore from shaking my head in disbelief.

Do all of these people really believe that the official vote count, tallied on black-box voting machines, is accurate?! That’s only about seven million times more infantile than believing in Santa Claus.

It isn’t at all obvious why anyone would make up a story as outlandish as the legend of Santa Claus. Naive little children can be forgiven for not immediately seeing right through that one.

But believing that a black box voting machine will yield an accurate vote count …  the mind boggles at such egregious, unimaginable idiocy.

Think about it, people (assuming you are capable of anything that could be called “thought,” which is far from obvious). What can possibly be the purpose of non-transparent “voting machines” that are privately owned and operated (entirely by members of one political party, which always gets more “votes” than the exit polls show) — machines that operate on proprietary software?

If your answer to the above question is “to count votes accurately” you are a candidate for a Darwin award. If there are a lot of you out there, our alleged democracy deserves that Darwin award … and will surely get it, probably sooner rather than later.

Let me put it more bluntly:

If you really think Trump won the election … and that the other reported “winners” and “losers” got the number of votes attributed to them in the official tallies … you are too stupid to live.

And yet everywhere I look, practically everyone commenting on the election seems to just accept, without the slightest hint of any critical reflection, much less healthy skepticism, the ludicrous idea that there is a direct relationship between the votes that go into a black box machine and the number that comes out. Perhaps you all do not understand the concept “black box.”

Here is how Wikipedia puts it:

In science, computing, and engineering, a black box is a device, system or object which can be viewed in terms of its inputs and outputs (or transfer characteristics), without any knowledge of its internal workings.

Heaps and heaps of money and power ride on election outcomes. Any private party with proprietary access to the internal workings of a voting machine WILL rig elections. That is the only conceivable reason that such machines would ever exist. If you do not understand this,  please shoot yourself in the head. NOW. It is the one part of your anatomy that you could not possibly damage, because it has long since ceased to serve any discernible function.

So will all of you gibbering idiots blathering on and on about the “elections” we supposedly just had PLEASE just stuff a rag in your mouths and wrap duct tape around your heads? The hideous, meaningless noises you are making are really starting to get on my nerves.

If there is anyone out there with one or two synaptic spark plugs that are still firing, yet who is unfamiliar with the fact that our fake “elections” are routinely stolen through black box voting machines that cannot possibly have been manufactured for any purpose except to steal elections, please familiarize yourself with some elementary data. [1] Exit polls (EP) conducted by Edison Research and published by CNN shortly after the closing of state polls and downloaded by TdMS.  Edison Research conducted one national EP and EPs in 28 states. As these first published exit polls are altered/adjusted to conform to the unverified computer vote counts, the discrepancies shown above are adjusted to near zero in the final EPs.

[3] The margin columns subtracts the Clinton totals from Trump’s.  A Trump win is shown by a positive sign and a Clinton win by a negative sign.

[4] Note that the Margin of Error (MOE) is for the differences between the two candidates (at 95% CI). This MOE is about double the usual MOE for each candidate. MOE calculated with multinomial formula discussed in sections 2 and 4 in:  Franklin, C. The ‘Margin of Error’ for Differences in Polls. University of Wisconsin, Madison, Wisconsin. October 2002, revised February 2007. Available at:  https://abcnews.go.com/images/PollingUnit/MOEFranklin.pdf

VT readers are probably also familiar with Gordon Duff’s report on the 10 million plus missing Democratic votes. Unfortunately Gordon’s math makes sense – especially when we take into consideration these facts: * Since Republican-owned companies imposed black-box machines on America, “results” (vs. exit polls) have strongly and consistently diverged in favor of Republicans almost across-the-board.

* Two previous presidential elections have been proven to have been stolen through the rigging of black box voting machines among other techniques – the 2000 and 2004 “victories” of George W. Bush.

*Am I pointing this out because I hate Trump or love Hillary? Not at all. If Hillary had “won” I would also be suspicious – especially since the Democratic nomination was obviously stolen for Hillary, in part through the use of rigged voting machines.

Though Republicans own the voting machines and are thus far the primary election fraud criminals, this problem is not a partisan issue. It is systemic. It is a cancer on our nation.

There is only one intelligent thing to say about this election: IT WAS BOGUS. Like all “elections” that use black box machines.

One Trump supporter who gets this is former CIA Clandestine Services Officer Robert David Steele, who is asking Trump to put forward the Electoral Reform Act of 2016. While I think Gordon Duff’s view of Trump is more accurate than Steele’s, Trump could easily prove me wrong by demanding election reform along the lines proposed by Steele. (And by reopening 9/11, prosecuting Bush- and Obama-era war crimes, and repealing the Patriot Act and other post-9/11 police state legislation.)

If Trump continues to appoint neocon stooges and criminals, and allows our terminally corrupt system to fester unto death, we will know that Gordon and I were right, and Steele and other Trump supporters wrong.

I will take no pleasure in having been right.