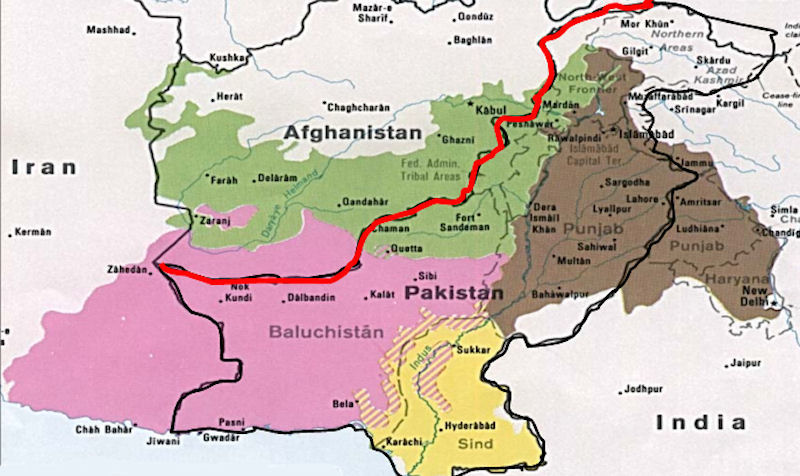 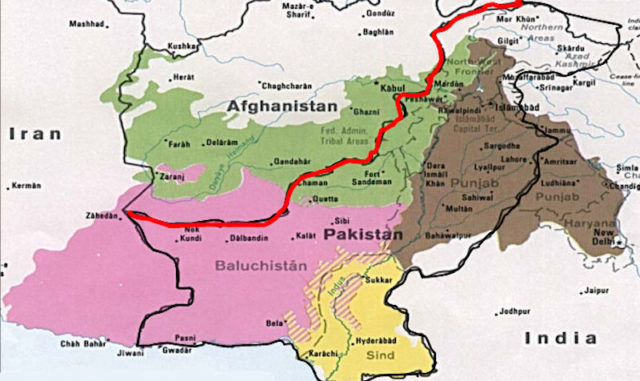 At least 65 people were killed and more than 100 others were injured when a blast struck at the shrine of the Sufi saint Shah Noorani in Balochistan’s Hub Tehsil on November 12, this year.

ISIS claimed responsibility for a terror attack on the Police Training College in Quetta-the provincial capital of Pakistan which left at least 60 individuals dead on October 24, 2016.

Earlier, an affiliated faction of the Tehreek-e-Taliban Pakistan (TTP), the Tehreek-e-Taliban Pakistan Jamaat-ur-Ahrar (TTP-JA) took responsibility for a deadly suicide bombing in Quetta, which killed at least 74 people on August 8, 2016 in an attack at the government-run Civil Hospital. The Middle East-based movement of the ISIS also accepted responsibly for that blast.

However, it was part of ploy that two terrorist groups accepted responsibility for the terror assaults in Quetta to divert the attention from the US-led India and Israel. Especially, Washington and New Delhi are playing double game with Pakistan to obtain the clandestine aims, particularly by trying to sabotage the China-Pakistan Economic Corridor (CPEC).

It is of particular attention that the blast at the shrine of the Shah Noorani exploded, one day before the Prime Minister of Pakistan Nawaz Sharif inaugurated the Gwadar port which is a warm-water, deep-sea port on the Arabian Sea in Balochistan, and is the center of $46 billion Pak-China project of the CPEC.

Following the inauguration ceremony, the port has formally been operationalized for trade activities through the western route of CPEC. In this regard, Prime Minister Sharif said, “I want to make it clear that CPEC is not only for a particular province but for entire Pakistan…the enemy of CPEC is enemy of Pakistan…Pakistan will leave no stone unturned to materialize the CPEC in time.”

Pakistan’s Army Chief General Raheel Sharif who also participated in inauguration event has repeatedly stated that Pakistan will complete the CPEC project at every cost.

Nevertheless, regarding the terror attack on the Police Training College, IG FC Major General Sher Afgun had informed the press that the attackers acted on directions from Afghanistan and the initial investigation suggests that the terrorists were affiliated with the outlawed Lashkar-e- Jhangvi Al Almi militant group. He elaborated, “We came to know from the communication intercepts that there were three militants who were getting instructions from Afghanistan.”

Notably, as part of the dual strategy, CIA, RAW and Mossad are in connivance with the Afghan intelligence agency, National Directorate of Security (NDS) and other terrorist groups. With latest capture of six NDS supported terrorists in Balochistan, the number of NDS backed terrorists arrested and killed by Pakistani Intelligence agencies has crossed over 126. These external secret agencies are particularly supporting the TTP which is hiding in Nuristan and Kunar provinces of Afghanistan. Reportedly, Mullah Fazlullah led TTP is being prepared to carry out a fresh wave of terror activities inside Pakistan, as the latter has become center of the Great Game owing to the ideal location of Balochistan.

Located on the southwestern coast of Pakistan, Balochistan’s Gwadar seaport is close to the Strait of Hormuz from where more than 17 million barrels of oil passes every day. Its location among South Asia, the oil-rich Middle East, and oil and gas-resourced Central Asia has further increased its strategic significance. Besides, Balochistan’s abundant mineral resources irritate the eyes of the US, India and Israel which intend to weaken Pakistan for their collective aims, as the latter is also the only nuclear country in the Islamic World.

As regards Balochistan, every Pakistani knows that the militant outfits like ISIS and separatist groups like the Balochistan Liberation Army (BLA) and their affiliated groups, including Jundollah (God’s soldiers) and Lashkar-i-Janghvi which have been creating unrest in the Balochistan get logistic support from RAW and Mossad with the tactical assistance of CIA. In the recent years, these terrorist outfits massacred many persons through suicide attacks, bomb blasts, targeted killings and sectarian violence. These externally-supported insurgent groups had kidnapped and killed many Chinese and Iranian nationals in Pakistan including Iranian diplomats. They have claimed responsibility for a number of terror assaults, including those on Shias in Balochsitan and Iranian Sistan-Baluchistan.

In fact, like Syrian war, as part of the double game, CIA, RAW and Mossad are especially using ISIS terrorists who are behind the latest blasts in Balochistan to obtain the covert aims of their countries against Pakistan, China and Iran.

It is also of particular attention that arrest of the Indian spy Kulbushan Yadav in Balochistan has exposed Indian undeclared war against Pakistan. While addressing a joint press conference with Federal Minister for Information Pervaiz Rasheed, Director General of Inter-Services Public Relations (ISPR) Lt. Gen. Asim Saleem Bajwa said on March 29, 2016, “Kulbushan Yadav’s arrest is a rare case that does not happen very often.” He disclosed that Yadav was an active officer of the Indian Navy prior to his joining RAW. He also served as a scrap dealer and had a jewelry business in Chahbahar, Iran, after he joined RAW in 2013.

A video was also shown during the press conference in which Yadav confessed that he spied for India. Yadav admitted that he was assigned with the task to create unrest in Karachi and Balolchitan by stating, “I supported the individuals who worked to destabilize Pakistan…I promoted the criminal mindset that was there in Balochistan.” Another task assigned to him was to target the Gwadar Port. Yadav also confessed—funding Baloch separatists along with other terrorists. During investigation, RAW agent Yadav admitted that during his stay, he contacted various Baloch separatist leaders and insurgents, including Dr Allah Nazar Baloch, to execute the task to damage the China-Pakistan Economic Corridor project.

Meanwhile, Pakistan’s secret agencies uncovered another ring of Indian spies in the country, working as under covert agents, found involved in subversive activities to destabilize Pakistan. In this connection, on November 2, this year, Islamabad disclosed that five Indian diplomats who were serving at the Indian High Commission in Islamabad found to be part of the RAW spy network and were involved in subversive activities by facilitating and funding terrorism. They were declared as persona non grata and expelled from the country.

As a matter of fact, almost all the terrorists or terrorist groups and insurgency in Pakistan, especially Balochistan have their connections in Afghanistan. The porous border between Pakistan and Afghanistan is frequently used by human and drug traffickers, criminals and terrorists. Their easy access through unguarded porous border provides opportunity to miscreants to cause havoc inside Pakistan and Afghanistan. For effective counter terrorism measures strong border, control management is vital at Pak-Afghan border. But, Afghan rulers are using delaying tactics in this respect.

Taking note of the anti-Pakistan intruders, Pakistan’s army had decided to build a fence along the border, and to control the border crossings. The strategic project of 1,100-kilometre-long trench with the cost of Rs14 billion which was initiated along Pak-Afghan border in Balochistan by Frontier Corps in 2013 has been completed this year.

In the next phase, the project will be extended to the entire long border with Afghanistan which had opposed this plan.

While, from time to time, controversy arises between Afghanistan and Pakistan when Afghan officials refused to recognize the Durand Line which is the 2640 kilometer long and porous border, situated between both the countries.

The issue again came to the limelight on June 12, 2016 when Afghan security forces started unprovoked firing at Torkham border crossing, resulting in injuries to more than 16 Pakistani citizens, including the martyrdom of some Pakistani security personnel. The aim was to stop Pakistan from construction of a gate.

Durand Line has not been drawn by Pakistan, but it was declared border line by British representative Sir Durand and Afghan Ameer Ghazi Amanullah Khan in 1919. People of Pakistan’s province of Khyber Pakhtunkhwa and FATA (Tribal Areas) opted to join Pakistan in 1947. So, it is a declared border line and Afghan government has no right to object on any construction along with the Durand line.

There is no doubt that escalation of tension at Pak- Afghan border is deliberately engineered by the elements opposed to peace talks and improvement of bilateral relations between Islamabad and Kabul.

Pakistan is committed to tackle the problem of terrorism mainly emanating from Afghanistan. Hence, the effective border management becomes imperative to control all the terrorism-related infiltrations, drug smuggling etc.  Moreover, effective border management will also facilitate both countries to come out of blame game, as it would offer a strict check on both sides to counter the free movement of terrorists and drug mafia lords, who are the important factors of deteriorating security situation in Afghanistan and its obvious backlash on Pakistan.

Besides, Afghan peace and reconciliation process is a reality despite of its slow pace and continual interruptions. The positive trajectory of constructive relations between Islamabad and Kabul raised alarm-bells amongst the US-led adversaries who are attempting to affect the progressive Pak-Afghan relations through smear and sinister scheming.

Pakistan and Afghanistan have previously suggested many initiatives to resolve their differences. However, as fast as these solutions had emerged they have disappeared due to lack of follow-up. Afghanistan and Pakistan have no other option, but to cooperate and resolve their differences through political and diplomatic dialogue. Besides, there is a huge lack of trust between the both sides. Therefore, it is imperative for both the countries to develop a framework for strategic dialogue, focused on short, medium and long term solutions. As a trust building initiative, an effective border management mechanism will be beneficial for the two countries. Such an establishment will also plug in many loop holes, being manipulated by the terrorist outfits to conduct cross border terrorism.

It is also of particular attention that the armed forces of Pakistan have broken the backbone of the foreign-backed terrorists by the successful military operation Zarb-e-Azb, which has also been extended to other parts of the country, including Balochistan. And Pakistan’s primary intelligence agency, ISI has broken the network of these terrorist groups by capturing several militants, while thwarting a number of terror attempts.

It is notable that since the government of the Balochistan province announced general pardon and protection to the Baloch militants as part of reconciliation process, many insurgents and their leaders have surrendered their arms and decided to work for the development of Pakistan and the province, peace has been restored in Balochistan.

Nonetheless, recent blasts in Balochistan show that the US-led India and Israel have again started acts of sabotage in the province to weaken Pakistan and to sabotage the CPEC.