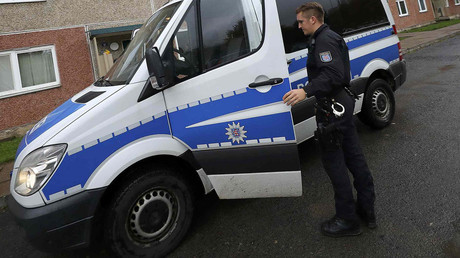 German police have carried out a large-scale operation targeting Islamists across ten German federal states, the country’s Interior Ministry (Bundesministeriums des Innern) reported on Tuesday. The raids took place in 60 cities, including capital Berlin.
According to the German media, police have searched offices and mosques believed to have links to the Islamist missionary network ‘The True Religion,’ which is known to have been distributing free Korans at infostands throughout Germany.
Germany’s Interior Ministry banned the organization on Tuesday morning. A spokeswoman for the ministry said that authorities believe the group has acted in violation of Germany’s constitution and incited hatred.The media states that the group advocates armed jihad and supports terrorist organizations, citing law enforcement authorities.

Authorities believe over 500 people to be part of the group, which has some 60 local initiatives throughout the country. The investigators are reportedly after the group’s founder, Abou-Nagie, an Islamist hate preacher of Pakistani origin who lives in Cologne. His home in Cologne has been searched, as well as his girlfriend’s in Bonn.

In total, some 190 mosques, offices, and apartments associated with the group have reportedly been searched in 10 federal states.

The raids were carried out in Hesse, North Rhine-Westphalia, Bavaria, Bremen, Lower Saxony and Hamburg. The operation is also being carried out in the capital, Berlin, where some 50 apartments and offices have been searched. In total, police raided the network’s premises in 60 German cities, German Interior Minister Thomas de Maziere said at a press conference that followed the operation.

There have been no reports of arrests as of yet.

The group is widely known for its ‘Lies!’ (read) initiative, which distributes free copies of the Koran while calling on Germans to “read the noble” book.

This morning, apparently in response to the police operation, they wrote a post declaring that “Germany has banned the Koran.”

The ‘Lies!’ activists have reportedly distributed around 3.5 million copies of the Koran in Germany so far. Authorities in some German cities have banned their actions, but activists have often ignored them, and distributed the books from backpacks and bags in response.

Numerous young Muslims have been radicalized during the Koran distribution campaigns, Interior Minister Thomas de Maziere told reporters. At least 140 ‘Lies!’ activists and supporters have already moved to Syria and Iraq to fight alongside the jihadists, he said. Some terror suspects in Essen, who participated in a bomb attack on a Sikh temple in April, were previously known as ‘Lies!’ activists, according to Die Welt.

Germany has been on high terror alert in recent months. In July of this year, the country suffered three lone-wolf assaults. In all cases, the perpetrators had either direct links to the Islamic State (IS, formerly ISIS/ISIL) terror group or were inspired by radicalism.

De Maiziere warned back in September that there were more people in Germany capable of committing terrorist acts than ever before. According to the minister’s data, more than 520 people are could potentially commit “unexpected” and “high-profile” terrorist attacks inspired by Islamism.

Anti-terror raids have been carried out across the country on several occasions, in which a number of suspected radicals have been detained. In October, German police conducted several raids in five federal states in response to an “imminent terror threat.”