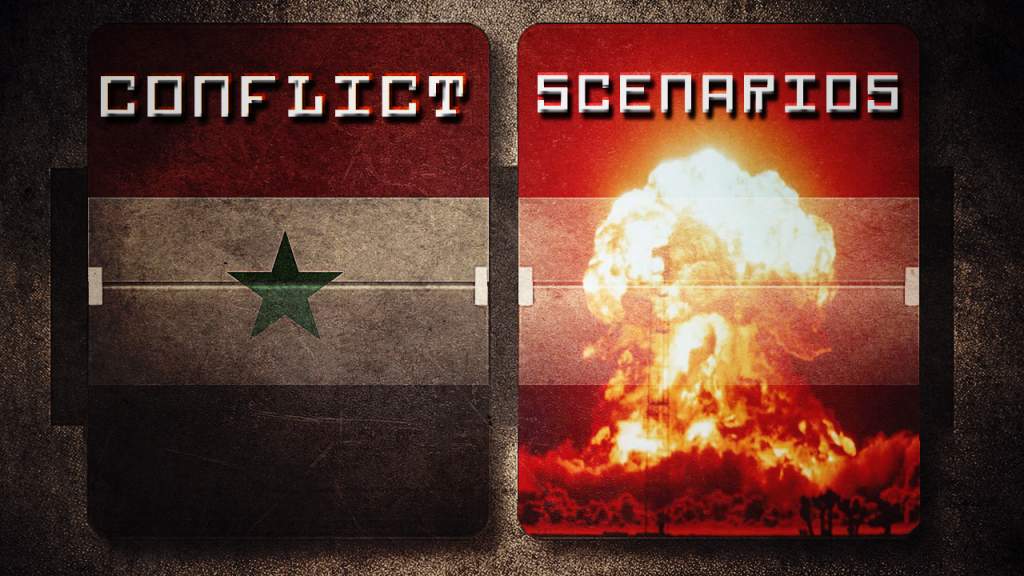 In terms of the actual failure of diplomatic efforts to resolve the Syrian crisis, the threat of a direct armed conflict between Russia and the United States is becoming more and more of a reality.

In simulating a possible armed conflict between the Armed Forces of the involved countries, we can state with some confidence that it will commence with a series of provocative actions. Possibilities include air strikes of “unknown aircraft” on civilians, the use of chemical weapons, destruction of humanitarian convoys, “shooting” at military aircraft or ships of the coalition forces, and possibly even encompassing their complete destruction. The United States and Western countries will undoubtedly accuse the Syrian or Russian Armed Forces of any such action in this regard.

Furthermore, bypassing all the international organizations and their resolutions, a certain “group of friends of Syria” will declare a decision to establish a no-fly zone over Syria to “ensure the safety of the civilian population” as part of the US “R2P – Responsibility To Protect strategy. After a repeated provocative episode, for example, the use of chemical weapons, there will be an announcement for the beginning of a full scale military operation against the “criminal regime and its ally”

If it is decided to fully implement this power projection scenario, the target of the first strike will be air defense systems and command and control centers of the Syrian army. The US would show their strength and willingness to take extreme measures to offset the Assad regime. In this scenario, the campaign against the media propagandized “universal evil” is to improve the reputation of the United States on the world stage. This strike will be launched with cruise missiles upon the most vulnerable targets, which will be situated in locations with the weakest air defense system. The strikes will be carried out from a safe 500 km distance from the main targets. In this case, the US Mediterranean naval group will be out of the zone of defeat of anti-ship missiles “X-35″ (Range – up to 200 km) and “Onyx” (SS-N-26 Strobile, range – up to 300 km). The Syrian army will not be able to strike back on its own, and Russia may be willing to make significant concessions in the negotiation process. That could relieve the United States from the need to carry out more extensive and costly operations.

However, Russia is likely to act from the position of strength. Qualifying the deaths of several groups of Russian military advisors in the Syrian targeted areas as an act of aggression, Russia can execute a number of various military operations, directly or indirectly. In particular, several American ships in the US Mediterranean fleet could be destroyed by stealthy diesel-electric submarines the Project 636 “Warszawianka”. In addition, US warships can be attacked by Tu-160 strategic bombers. Or US warships, aviation and ground forces and facilities in the Middle East which were involved in the aggression can be attacked by Russian rocket, artillery and air defense systems from Syrian territory and on behalf of Syrian Arab Army. Any such direct or indirect operations will also be framed by the US as an act of aggression. Thus, they will move on to the scenario of a massive attack of the forces of the two fleets

In general, this strike can be executed by more than 1500 cruise missiles. Currently in the Mediterranean Sea there is deployed 4 guided-missile destroyers of the US Navy – USS Ross (DDG-71), USS Carney (DDG 64), USS Donald Cook (DDG 75) and USS Porter (DDG 78). Each of them is equipped with multiple vertical launch systems with no less than 90 start-up cells, each of which can be charged with an anti-submarine, an anti-aircraft or a cruise missile. When the strikes are executed on the ground targets each cell can be charged with a cruise missile BGM-109 “Tomahawk”. The naval combat group would be shadowed with one nuclear-powered Ohio-class sub with more than 150 cruise missiles aboard.

The target of the massive strike will be the ships of the Russian Mediterranean fleet, command centers, airfields, air defense systems and electronic warfare. The US and its allies will resort to the force scenario only if they can achieve overwhelming superiority over their stated enemy. In spite of the deployment of air defense systems “Pantsir-S1″(SA-22 Greyhound), the S-300 (SA-10 Grumble) and S-400 (SA-21 Growler), as well as sea-based air defense systems, the army command and control systems as well as air defense systems of Russia and Syria, would receive irrepairable damage in the case of implementation of a massive attack by cruise missiles from a safe distance.

According to military experts, for the assured destruction of one Russian air defense complex, approximately 10 missile launches under the condition of retaliatory fire by the air defense complexes are required. According to some estimates, there are approximately up to 200 air defense systems on permanent combat readiness throughout Syria. However, the destruction of the primary radars can “blind” defense launchers. The only trump card in this scenario could be Russian top-secret electronic warfare systems, which theoretically could disorient the enemy cruise missiles as well as naval vessels. If this does not happen, it is unlikely that Russia will retaliate by means of conventional weapons. It may be sufficient, in one hour of operation, to eliminate the threat to the United States and its allies Air Forces.

In this situation, Russia will be faced with a choice: to abandon Syria, leaving it at the mercy of warring factions, or to respond with a tactical nuclear attack. The US calculation will be conducted based upon the premise that Russia in this situation would not dare to take such a step. According to I.27 of the Military Doctrine of the Russian Federation by 2014, “The Russian Federation shall reserve the right to use nuclear weapons in response to the use of nuclear and other types of weapons of mass destruction against it and/or its allies, as well as in the event of aggression against the Russian Federation with the use of conventional weapons when the very existence of the state is in jeopardy”. In this case, the United States and its allies do not use nuclear weapons and do not specifically pose a threat to the existence of the Russian state, although that point could be debated considering the US is continually imposing itself upon Russia’s borders and has played the role of aggressor since the beginning of the New Cold War.

Meanwhile taking into account the approximate flight time of cruise missiles to the target (roughly 40 minutes at missile speeds up to 880 km/h and the distance to target of 500 km), the military and political Russian leadership will have enough time to estimate the scale of the attack and resort to a Predetermined Response Plan. The main Russian counter strike would be executed upon the elements of the missile defense system in Europe. At the same time the concentrated forces of the 5th and 6th fleets will be entirely destroyed by the X-102 missiles from Tu-160 bombers. The US and its allies in their turn will try to launch a retaliatory nuclear strike on the territory of the Russia Federation. So the final step will be a strategic nuclear exchange.

However, considering a more likely the scenario that involves maintaining military parity in the region, the parties may continue negotiations, gradually developing successes on various fronts. After the capture of Mosul and Raqqa the US coalition forces will attempt to gain control over as much Syrian terrain as possible. After the capture of Aleppo, Russia will also move to the center of the country. Thus, Syria will be divided into spheres of influence similar to post-war Germany. The parties then will begin long-term political negotiations on forming a national unity government and resolve the status of Kurdish autonomy. No matter how the situation develops, Russia will continue to ensure the rise to power of a loyal government that is representative of the Syrian people, as well as being a staunch ally, and thus retain the Russian naval base in Syria. The recent win of Donald Trump in the US presidential election likely contributed to this peaceful scenario. Experts expect that with Trump in the White House, the main players in the region – Russia and the US – will have more chances to make a deal to divide the spheres of influence.