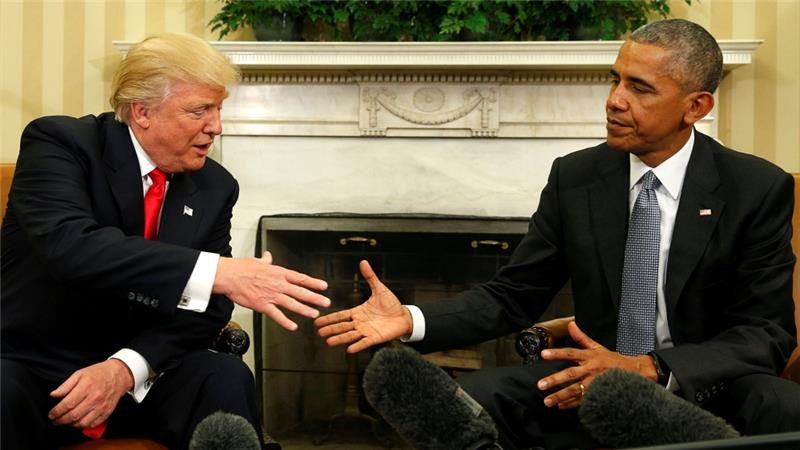 Obama: “My main message … and the message I delivered in Europe is don’t just assume the worst.”

I honestly have to give President Obama some credit for making the same point I was trying to articulate a few days ago. Throughout the presidential election, Obama did say repeatedly that Trump was unfit for office.

But after Trump got in, his position was quite different, which is understandable. His sensible statement is also similar to what Hillary said during her conceding speech. Obama declared:

“My main message to you … and the message I delivered in Europe is don’t just assume the worst. Wait until the administration is in place, it’s actually putting its policies together, and then you can make your judgments as to whether or not it’s consistent with the international community’s interest in living in peace and prosperity together.

“It will be important for everybody around the world to not make immediate judgments but give this new president-elect a chance to put their team together, to examine the issues, to determine what their policies will be, because as I’ve always said, how you campaign isn’t always the same as how you govern.”

This position is indeed rational and defensible. There is no doubt that the Powers That Be will attempt to manipulate the new administration, and there is no doubt that the new administration will be under a lot of pressure. Still, we need to wait and see what Trump will bring to the table and judge whatever he does on the basis of logic, reason, coherency, and consistency.

We all know for example that Trump is not an intellectual; he doesn’t seem to examine some of his statements before he utters them. If we define intellect as the capacity to grasp complex ideas and metaphysical issues and articulate them in a logical and consistent way, if we say that intellect also involves establishing rigorous criteria of any new or old theories, then Trump hasn’t done that.

Trump is a businessman, and people like that are usually not interested in ideas and following those ideas to their logical conclusions. They usually are interested in business and practical or manual things and in getting a particular job done at a specific time. They are also interested in making deals.

Pick up a copy of some of Trump’s earlier books and start reading them and you will get the point. Books such as The Art of the Deal, How to Get Rich, Midas Touch: Why Some Entrepreneurs Get Rich and Why Most Don’t, Think Like a Billionaire: Everything You Need to Know About Success, Real Estate, and Life, etc., are not intellectual discourses.

At the same time, one should never equate intellect with wisdom. Oscar Wilde, Friedrich Nietzsche, Jean Paul Sartre, Aldous Huxley, Karl Marx, Sigmund Freud, Wilhelm Reich, Michel Foucault, Bertrand Russell, D. H. Lawrence, were all intellectuals, but they were hardly wise. Why? Because they deliberately excluded morality or practical reason from their intellectual or political project. Huxley meant it when he said:

“For myself, as for no doubt most of my contemporaries, the essence of meaninglessness was essentially an instrument of liberation…We objected to morality because it interferes with our sexual freedom.”[1]

It was this sort of objection to morality that led Foucault to say: “To die for the love of boys: What could be more beautiful.”[3]

What does this all mean? Mel Thomson and Nigel Rodgers write in Philosophers Behaving Badly that “the life of reason does not necessarily lead to a reasonable life.”[4]

What this means is that philosophers, intellectuals and politicians cannot exclude morality or practical reason from their personal life. Failing to integrate morality in any political or intellectual project will only bring disaster in the end. An intellectual or political project without morality is like a house built on sand. As E. Michael Jones again points out,

Modern thinkers and politicians are trying to conform truth to their desires, and that always brings pain and misery.

If Trump wants to succeed, if he aspires to “make America great again,” then he will have to renounce his allegiance to those who refuse to conform their desires to truth, namely, the Israeli regime and its puppets in America. Trump cannot “make America great again” when in fact the Israeli regime is politically and economically bleeding America to death.

The United States “provides Israel $10.2 million in military aid” every single day, while decent Americans are struggling to make ends meet. This is completely contrary to what the Founding Fathers had envisioned. What’s equally ridiculous is that the Israeli regime uses that money to create chaos, incite hatred and violence and even terrorism in the Middle East and elsewhere.[6]

The irony is that Iran, the alleged enemy of the United States, has for decades tried to reach out to Washington in order to craft a reasonable and workable deal.[7] Washington repeatedly refused because the Israeli regime does not want the United States to make a deal with a country that supposedly wants to “wipe Israel off the map.”

Trump has to fix the relationship with decent countries in the Middle East, including Iran. In that sense, he will have to keep an eye on terrorist regimes like Saudi Arabia.

Trump will also have to submit his own will to practical reason. If he wants to follow the advice of John Adams, then he has to at least pay heed to his dire warning:

“We have no Constitution which functions in the absence of a moral people.”

We praise Trump for his willingness to work with Vladimir Putin, and it is obviously clear that there will no longer be an ideological war with Russia. It has been reported that the Trump administration is not seeking for “a liberal revolution in Russia.” The incoming administration will base their political strategy on “dialogue and agreements.”[8]

That indeed is a good sign. War with Russia was not an option for the United States at all. Trump needs to do the best he can to stop perpetual wars in the Middle East, and that includes the wars in Iraq, Afghanistan and Syria.

This obviously means that the United States will suspend their covert relationship with Israel, or at least suspend the unconditional support of Israel.

This would be a hard task because the Israeli regime and the Neocons in America walk on the blood of Palestinian men, women and children. As Jim W. Dean has recently pointed out,

“If Trump brings the Neocon gangsters in, they will do what they live to do; and having already done it to the country, they will rape and pillage it some more.”

Ultimately, we want peace, not war. And an unconditional relationship with Israel and the Neocons will bring more bloodshed in the Middle East. He has to set the boundaries and both the Israeli regime and the Neocons have to respect those boundaries. If they fail to do so, then they must be willing to pay the consequences.

Finally, Trump will have to alienate himself from the Christian Zionists because they will always try to subvert his foreign policy and favors Israel over anything else.

In that sense, Trump has a huge burden on his shoulder. He will be a wise man if he can carry that burden and make peace with both Israel and the Palestinians. Will he be a good or bad president? Will he be a wise person?

Only time will tell. For now, we just need to take President Obama’s sensible advice: Give Trump a chance.

[1] Aldous Huxley, Ends and Means: An Inquiry into the Nature of Ideals and into the Methods Employed for their Realization (London: Chatoo & Windus, 1946), 273.