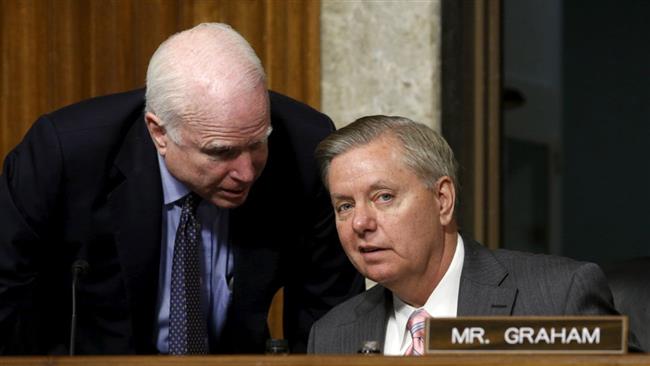 US senators say they would counter incoming President Donald Trump if he moves to establish warm relations with Russia.

Lawmakers from both political parties would like Trump to rein in Russia, but they are also willing to take unilateral measures if necessary, according to an analysis by congressional newspaper The Hill.

“We cannot sit on the sidelines as a party and let allegations against a foreign government interfering in our election process go unanswered because it may have been beneficial to our case for the moment,” Senator Lindsey Graham said.

The South Carolina Republican said he was planning a multi-pronged approach, which would include helping allies in Eastern Europe counter Russia and holding a series of congressional hearings to highlight Russian “misadventures.”

“With the US presidential transition underway, Vladimir Putin has said in recent days that he wants to improve relations with the United States,” the Arizona senator said after the first phone conversation between Trump and the Russian leader.

“We should place as much faith in such statements as any other made by a former KGB agent who has plunged his country into tyranny, murdered his political opponents, invaded his neighbors, threatened America’s allies, and attempted to undermine America’s elections.”

The increased pressure from the Senate comes as the House of Representatives passed legislation that would impose sanctions on the government of Syria and its supporters, including Russia and Iran.

Lawmakers have for years accused President Barack Obama of not being firm enough against Putin in the face of Russia’s “aggression” in Ukraine and more recently its air campaign in Syria.

They are now even more concerned with Trump who has openly praised the Russian president and called him a much stronger leader than Obama.

“I am deeply concerned about his views on Russia, which over the last 12 months have demonstrated the same fondness for the autocratic and belligerent Kremlin which animate President-elect Trump’s praise of Vladimir Putin,” Schiff said.

Senator Ben Cardin, Democrat of Maryland, echoed that concern on Friday, saying he is “disturbed by General Flynn’s relationships and ties with Russian actors.”

“There are Democrats and Republicans that are, I think most members of Congress, that are very concerned about Russia’s activities and how we try to reconcile that with statements that Donald Trump made during the course of his campaign,” said Cardin, who is the ranking member of the Senate Foreign Relations Committee.

On Sunday, Putin said Trump had confirmed to him he was willing to mend ties with Russia. “The president-elect confirmed he is willing to normalize Russian-American relations. I told him the same.”

Trump’s campaign had been hit with many controversies since its inception in early 2015. But the real estate tycoon still managed to stun the world by defeating the heavily-favored Democratic candidate, Hillary Clinton, in the November 8 election.

Trump will take office as the 45th US president in January.