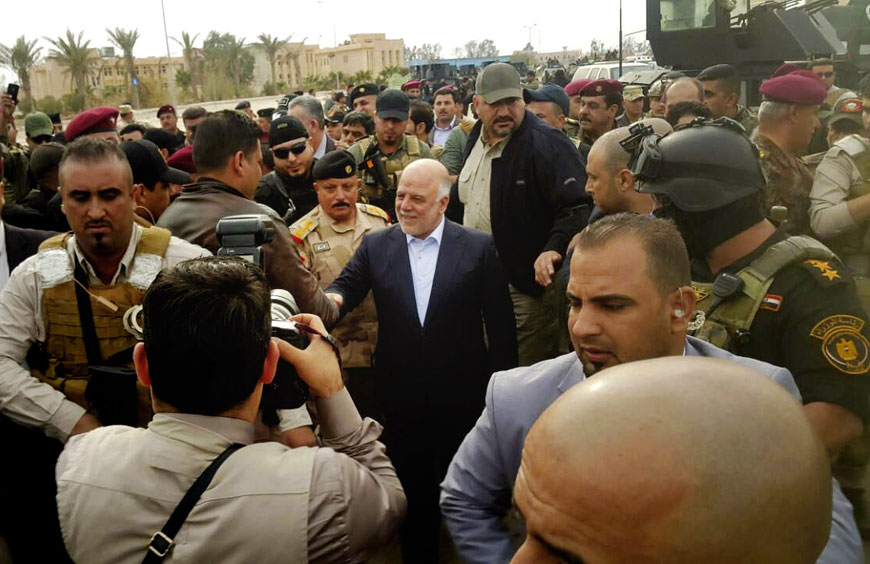 The Popular Mobilization Units (PMU), also known as Hashd al-Shaabi forces, in Iraq say the US-led coalition fired a missile at their command tent at the recently liberated Tal Afar Airport after Prime Minister Haider al-Abadi met with commanders there.

In a statement released on Friday, the PMU said that the attack took place on Thursday and left several people injured.

An investigative committee has been set up to probe the incident, with its examination of the missile wreckage showing that the laser-guided rocket had not been fired by the Takfiri Daesh terrorist group, the statement read.

It also added that the missile landed one meter and a half from the PMU commanders’ tent while a drone belonging to the US-led coalition was up in the sky.

The PMU called on the US-led alliance to provide an explanation for the incident, noting that it will announce the findings of the probe after its conclusion.

On Saturday, the Iraqi parliament approved the merger of the PMU with the army. Chairman of the Islamic Supreme Council of Iraq (ISCI) Ammar Hakim hailed the development as a national event.

The United States and some of its allies have been carrying out airstrikes in Iraq since June 2014 allegedly targeting Daesh elements in the northern and western parts of the conflict-plagued Arab country.

Meanwhile, Iraq’s War Media Cell said that Iraqi forces had blown up a factory, in the village of al-Zawiya south of the city of Mosul, where terrorists had planted 200 booby traps.

Iraq’s al-Sumaria news website also reported that an army drone targeted a Daesh vehicle that was later blown up in the same village.

Additionally, the Iraqi forces advanced in the eastern side of the Tigris River that divides Mosul in half.

A local source in Nineveh Province, of which Mosul is the capital, said that the Iraqi volunteer forces had shot down a Daesh spy drone in the district of Tal Afar.

Meanwhile, there were reports that Daesh had cut off water from the liberated areas in the western bank of the Tigris River.

It was further reported that the terrorist group had dropped bombs from a spy drone on a sports field in a village on the outskirts of Shirqat, which lies on the Tigris River 100 kilometers south of Mosul. The bomb attack left three children wounded.

Moreover, Diyala Police chief, Jasim al-Sa’adi, said in a statement that his forces had confiscated a large quantity of guns, explosives and military equipment after inspecting a mountainous area close to the Mansuria military base and the Hamrin region.

Mosul fell to Daesh in 2014, when the terror outfit began its campaign of death and destruction in Iraq.

Since October 17, Iraqi army soldiers and allied fighters have been leading an offensive to retake the city, the last Daesh bastion in the country.