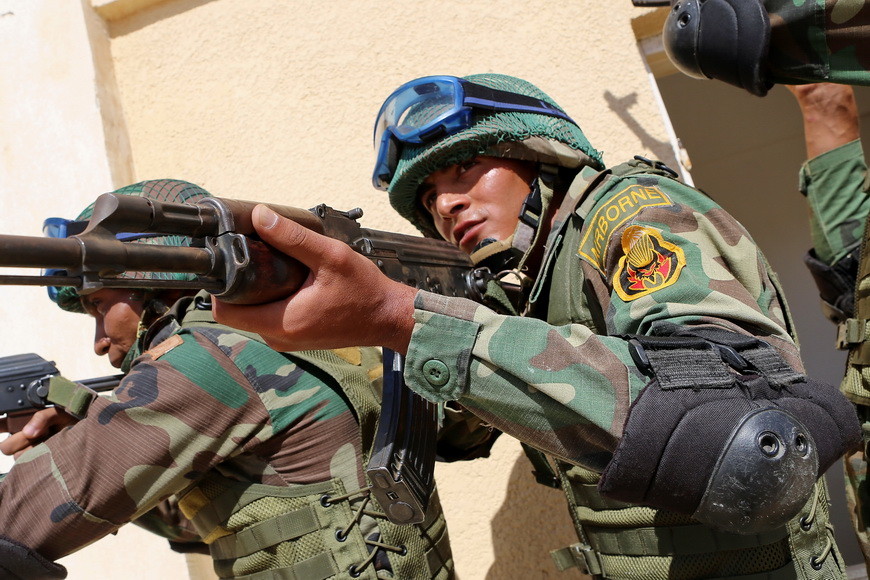 [ Editor’s Note: It is too early to tell if this is a token effort just for show, or the beginning of the Egyptian military putting its nose into the Syrian War tent. If these initial deployments are just a vanguard for more that could follow, we could see a major new ally for Damascus with the manpower assistance that it needs.

What is missing in the story below is any mention of Egypt sending combat helicopters with their 18 donated pilots.

Are these pilots replacing Syrian ones lost in combat, or could they be flying Russian choppers to get some combat flying experience? I hardly expect that the Syrian Airforce was 18 extra choppers laying around.

And with two of the major supporters of the terrorists against Syria being Qatar and Saudi Arabia, who just happen have been major financial backers during Egypt’s long running financial crisis, Egypt could be playing with fire if it were to become seriously involved in combat against these two Gulf State terrorist proxies.

Egypt has sat on the sidelines and watched Hezbollah and the Iranian militias gain huge experience in conventional fighting against the terrorists, not just the guerrilla conflict it is fighting in the Sinai. Has General Sisi taken the gamble to strengthen his anti-terrorism efforts with some live fire training for his own troops in Syria, after watching how Iran and Russia have gained that valuable experience, not just in combat blooded troops, but in officers, also?

The back drop to all this is the ongoing negotiations the Russians are having with Cairo to refurbish an old naval base that was once used by the Russians. Where there are Russian naval bases, there will be its best air defense missiles — a boomerang on NATO’s continued forward deployment to the Russian border.

And don’t forget the Mistral ships that Egypt had bought from the French. We could find them supporting the Russian fleet operations in their own anti-terrorism operations — another boomerang on NATO… Jim W. Dean ]

Egyptian military servicemen have recently arrived to Syria in order to support the Syrian government in its war against terrorists, according various media reports. Egypt has allegedly sent some 18 helicopter pilots to the Hama Airbase. These pilots are set to participate in joint Egyptian-Syrian operations against terrorists.

There are reportedly four senior Egyptian military figures already in Syria. Two Egyptian Major Generals have been reportedly operating at the Syrian Armed Forces Staff Headquarters in Damascus and touring various fronts since they arrived the country month ago.

Earlier this week, the Lebanon-based As-Safir newspaper reported that Egyptian warplanes had landed the Hama Airbase for the first time. The newspaper claimed that jets were set to participate in operations against ISIS.

The new reports appeared amid a number of speculations about high profile security meetings between Cairo and Damascus. Some pro-Assad sources expect that the Egyptian military can expand its involvement into the Syrian war on the side of government forces.

On November 22, Egypt’s President Abdul-Fattah al-Sisi said in an interview with Portugal’s RTP TV that Cairo will support the Syrian national army in its battle against terrorists.

“Syria has been for five years suffering a deep crisis. Our stance is that we respect the will of the Syrian people,” the Egyptian president added, saying that the political settlement will be the best way to solve the conflict. Earlier in November, SouthFront reported that a group of Egyptian officers had arrived to Syria in order to learn from Russian military advisers that are embedded with government troops at the battle against terrorists across the country.

In October 2016, Russian airborne troops arrived Egypt to participate in a joint military drill with the host country. The drill was code named “Defenders of Friendship 2016”.