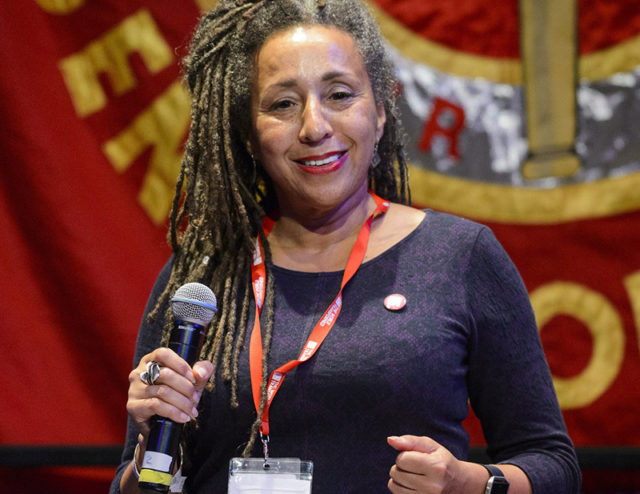 But once again the paranoid West Jerusalem media got it wrong. This was no anti-Israel event – it was pro-Palestinian supper with proceeds going to MAP (Medical Aid for Palestinians) and the Palestinian Trauma Centre, both of which work flat-out dealing with the horrors inflicted by the Israeli regime.

Jewish News reported that [Jewish] community figures had criticised the decision by the Palestine Solidarity Campaign (PSC) to invite Jackie Walker to speak at their fund-raising event at Chapelfield Methodist Church in Norwich. The Board of Deputies of British Jews vice president Marie van der Zyl declared: “It is against all logic that a church would be willing to tolerate an unapologetic serial offender under its roof. We call on the church to reconsider.”

The BoD, which claims to speak for British Jews, also criticised Norwich PSC for claiming a ‘Jewish lobby’ was controlling the nation and funding political parties in the interests of Israel rather than Britain. The fact that around 80 percent of Conservative MPs and MEPs are persuaded to sign up to Friends of Israel, an organisation whose purpose is to promote Israel’s interests in the UK Parliament and membership of which is seen as a stepping stone to high office, surely proves the PSC’s point.

And as if to underline the presence of Israel-firsters in our midst, the Board of Deputies President Jonathan Arkush in his New Year message said: “I was pleased to have a number of meetings with Israeli Prime Minister Benjamin Netanyahu. On each occasion I assured him of the Board of Deputies’ and the [Jewish] community’s steadfast support. Whether it is speaking at demonstrations, making the case in the media, challenging BDS or supporting grassroots advocacy organisations and Christian allies around the country… we have kept that promise and will continue to find new ways to do so.”

What can you say about people, including their aforementioned “Christian allies”, who give steadfast support to possibly the world’s most dangerous lunatic, and certainly one with a great deal of Palestinian blood on his hands?

The Council for Christians and Jews (CCJ) jumped in to say it was “deeply troubled” and “extremely disturbed” by Jackie Walker being asked to speak at the church. The CCJ found many of Walker’s comments “inflammatory, divisive and offensive, particularly in regard to comparisons between the Israeli/Palestinian conflict and the Holocaust. Her speaking will only further increase tension and divisions between communities.”  The CCJ also said she was wrong to suggest that security in Jewish schools has nothing to do with antisemitism. “Across Europe, Jewish institutions—including schools—have been targeted and attacked simply because they are Jewish.”

Has the CCJ, I wonder, ever given a thought to the security of Christian schools in the Israeli-occupied Holy Land whose pupils are continually harrassed and assaulted by Israel’s uniformed thugs?

The Jewish Chronicle reported that the Methodist church was unaware Ms Walker would be speaking when it took the booking and has “sincerely apologised” to the Orthodox synagogue nearby. The church had taken the booking “in good faith” and will never accept another from Norwich PSC.  Which begs the question, just how weak and wobbly can a Christian church be? According to unofficial PSC sources the lady minister in charge at Chapelfield, Norwich, cancelled the event after receiving intimidating calls and emails from the Board of Deputies.  Following lengthy discussion she then told the PSC their booking would go ahead. Later, a senior Methodist priest cancelled the booking again after consulting colleagues higher up the Methodist tree, with the lame excuse that allowing the event “would cause problems with other faiths particularly Jews”. The fact that two of the PSC’s speakers were Jews made no difference.

The Methodist Church tells the world it exists “to be a good neighbour to people in need and to challenge injustice”. If its ministers don’t even know about the hellish existence of Christian and Muslim communities in the Holy Land – the wellspring of their faith – or the religious war waged against them, and, worst of all, won’t stand against injustice when it’s staring them in the face, they have no business preaching the word of God in a fine building like the Methodist Church at Chapelfield.

Whipping up a storm in an antisemitism teacup

Luckily, the ever-sensible Quakers came to the rescue and hosted the Palestinian supper at short notice.

Anyway, what’s all the fuss about? It is really a desperate, orchestrated attempt to silence critics of Israel and its vile regime. Jackie Walker is one such critic. She is also Jewish and has ‘form’ when it comes to speaking out about Israel’s endless oppression of the Palestinians, to the point where she recently got herself suspended from the Labour Party and removed from the steering committee of Momentum (a huge army of supporters propping up UK Labour leader Jeremy Corbyn) for alleged anti-semitic remarks. Her double dismissal wasn’t difficult to achieve as both organisations are scared witless by the Zionist Inquisition that has been allowed to charge like a bull in a china shop through the heart of British politics.

I’m no fan of hers because she sometimes says things she needn’t and in so doing hands ammunition to the enemy. On the other hand Ms Walker has a fine track record as an anti-racist. Furthermore she has the gall to question the definitions of antisemitism being waved in everyone’s face. But did she really need to make a suggestion about Holocaust Memorial Day? “Wouldn’t it be wonderful if Holocaust Day was open to all people who experienced Holocaust?” she said at a training workshop dealing with antisemitism at Momentum’s conference. POW!! ZAP!! The sky immediately fell on her. A number of people in the room told her that Holocaust Memorial Day already included commemoration of other genocides. That’s true, but she replied: “In practice it’s not actually circulated and advertised as such.” The Nazi holocaust dominates for sure, but that remark was asking for flak.

She then added: “I still haven’t heard a definition of antisemitism that I can work with.” For that matter, neither have I. The antisemitism stormtroopers don’t seem at all clear on what a Semite actually is.

The Holocaust Education Trust accused Ms Walker of undermining and belittling “the distinct nature of the tragedy itself”. Momentum sources told The Independent they were “fuming” over Ms Walker’s comments.  Her remarks were also criticised by Jeremy Newmark, chair of the Jewish Labour Movement, who called on her to resign, saying he was “appalled”. That’s rich coming after the Electronic Intifada revealed that the JLM’s new director was employed as public affairs officer at the Israeli embassy in London. This of course adds weight to mounting concerns about interference in British public life by the Jewish lobby, which we’re told we mustn’t mention because it doesn’t exist. The point is well made that the JLM’s links to the Israeli embassy should disqualify the organisation from ever again running training sessions for the Labour Party on antisemitism or anything else.

The Chapelfields Palestinian supper fiasco has brought together the dark forces of censorship and intolerance against a lone woman who, many argue, has done no wrong and ought to be applauded.  And against a group of feeble-minded Methodists, who will no doubt receive earthly rewards for their servility.