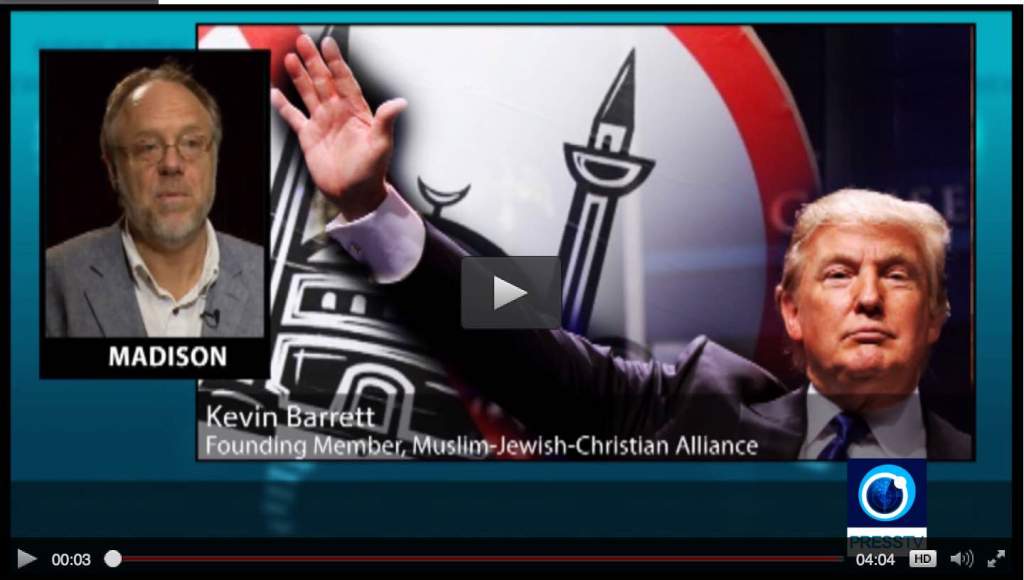 Dr. Barrett made the remarks on Sunday, while discussing a spike in hatred-filled attacks against Muslims across the US.

Three mosques in California received letters warning that the Republican president-elect would “cleanse” the country of Muslims, the Council on American-Islamic Relations (CAIR) reported Saturday.

Barrett said the letters were “disturbing” and indicated a bitter truth after nearly 15 years of Islamophobia that ensued from the 9/11 attacks.

“Many American Muslims are very upset as are many American fair-minded people, specially people on the left-side of the political spectrum who are looking at this Trump presidency which is unleashing all kinds of extreme… racist and nationalistic hatreds and rhetoric,” the analyst added.

Barrett said things like this raise much-needed awareness about the US government’s atrocities against Muslims around the world under the guise of the so-called war on terror.

“People have not really been worried about that; the kind of people who voted for [Democratic presidential nominee] Hillary Clinton and maybe even Bernie Sanders… do not seem particularly concerned that 2 million people have been murdered by their tax dollars all over the world,” he explained.

This is while Trump has also prompted outrage among Muslim and non-Muslim communities in the US by proposing a temporary ban on all Muslims from entering the US. He has also called for special IDs to that make tracking Muslims easier.

“Now with Trump in the White House, somebody who walks and talks a little bit like an American Hitler… and these storm trooper followers, or maybe false flaggers for all we know,” he said, hoping that the public would “wake up” to the reality of the 9/11 attacks.

“Again, it was a public relations stunt designed to launch a 100-year war on Islam on behalf of Israel,” Barrett said of the attacks against the Twin Towers in New York.