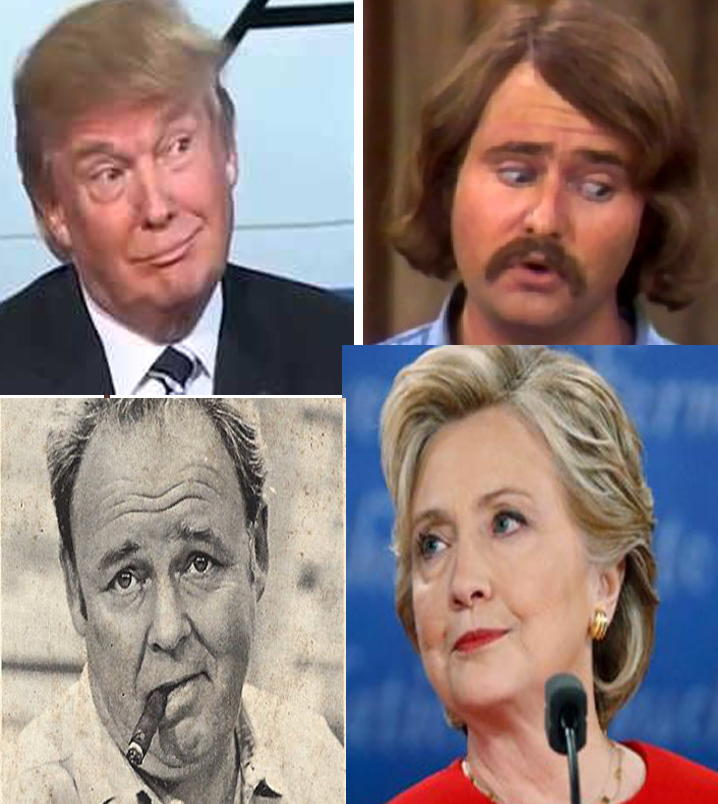 Archie Bunker is one of America’s most beloved TV Characters. Archie was the fictional star of the 1970s television sitcom All in the Family.  The iconic satire told the story of a typical American, white, patriarchal, working-class family living in Queens. Archie, the ‘patriarch’, was a middle-aged WWII veteran, a narrow-minded, conservative, blue-collar worker. A good Christian. A cherished member within Clinton’s basket of deplorables. Archie was a simple man who spoke his mind – an early prototype of president-elect Donald Trump.

All in the Family’s routine was an ongoing quarrel between Archie the ‘beloved bigot’ and his liberal son-in-law, college student Mike to whom Archie refers to as a “dumb Polack” and “meathead” for being “dead from the neck up”.

The one question Americans want to ask themselves is how did it happen that, despite Archie being one of the most beloved characters on American TV, America has become a nation of meatheads, suppressed by the tyranny of correctness and identitarian sensitivities.

Archie and ‘Meathead’ agreed on nothing. Yet, the nature of their dispute and the way in which it was delivered may provide us a window into the liberal cultural strategies that have been implemented in America and the West since the 1960’s.

All in the Family succeeded in pushing the liberal agenda into every American living room.  It caught America’s thought police off guard. The tactics were simple, however incredibly forceful. On a weekly basis it displayed tension between Archie’s ‘irrational’ bigotry and his level-headed, liberal son-in-law.  Week after week our most ‘beloved bigot’ was reduced into a ‘reactionary caricature’. Mike, the ‘meathead’ was the voice of liberal transition. Mike was slightly pathetic, an anti-hero protagonist. Yet, for different reasons, we accepted that he had a vision, he was leading the way ‘forward’ towards a new form of middle class decency.  They say that in America, working class folk like to move on up the ladder and Meathead provided them with a possible path.

Humour was the magic glue that bound it all together. To quote progressive community organiser Saul Alinsky, “humour is essential for through humour much is accepted that would have been rejected if presented seriously.”  Back in the 1970s, Norman Lear, the genius producer who invented Archie Bunker, couldn’t just attack white protestant America or ridicule what they believed to be their social values. Satire was his sword. Lear was a man with a clear political agenda. In 1981, he founded People For the American Way (PFAW). The progressive advocacy organization opposed the interjection of religion in politics. Lear was a vocal critic of the ideas held by the religious right. He was also a staunch supporter of secular thought and secularism, in general. However, while PFAW achievements have been limited, Lear’s Meathead actually revolutionised America, transforming it into a PC tyranny dominated by Identitarian sensitivities. While the FBI and the CIA were desperate to plant agents in what they believed to be subversive political cells, Norman Lear was pushing his own political agenda, leading a cultural revolution that was taking place under their radars.

American people who were born in the 1960’s and earlier can readily recall that America was a free place at one stage. They know very well that it no longer is, yet most Americans struggle to point out when and how it happened. When had Political Correctness become a dominant culture? How had ID politics become a universal code? Most Americans cannot identify exactly when they were transformed into Meatheads.

One may wonder, was Norman Lear a conspiratorial Cultural Marxist? Was he a student of Gramsci or Marcuse? I don’t know the answer and I don’t even care. The crucial lesson here is that cultural manipulation is a sophisticated project that settles in, undetected, under your skin. It is designed to transform your reality, your language, your values, and all this while you are unwittingly having beer or popcorn on your sofa laughing your head off in front of your TV screen.

But there is an interesting twist to this story. In the 1970s Archie Bunker, owing to his being a bag of blind spots, couldn’t grasp the transforming reality around him. He didn’t see the Black, the Hispanic, the Feminists, the Lesbians.  He felt secure in his little America in Queens. But nowadays, it is the Meatheads, the progressives, and the liberals who happen to be the bag of blind spots. They couldn’t comprehend the transforming reality. They couldn’t hear the cry of millions of Americans. They couldn’t foresee their defeat. They failed to see Brexit coming, they couldn’t see Trump winning.  They are detached.