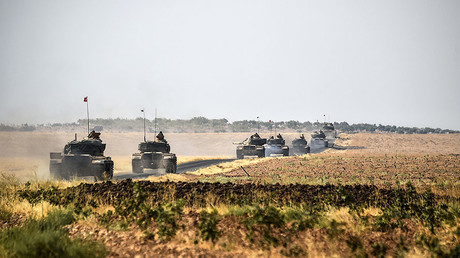 Turkey’s military operation in northern Syria does not target any country or individual, and is aimed only at terrorist groups, President Recep Tayyip Erdogan said. He had earlier stated that Turkey was in Syria to “end the rule of the cruel Assad.”

“The aim of the Euphrates Shield Operation [in northern Syria] is not any country or person, but only terrorist organizations,”Erdogan said Thursday, as quoted by the Hurryiet Daily News.

“No one should doubt this issue that we have uttered over and over, and no one should comment on it in another fashion or try to derail it,” he added.

Erdogan: Turkish forces are in Syria to end Assad’s rule

The latest comments come in contrast to remarks Erdogan made on Tuesday, when he said Turkey’s operation in Syria, launched in late August, aimed “to end the rule of the tyrant [Syrian President] al-Assad who terrorizes with state terror.”

This drew surprise from Russia, which asked for clarification of the remarks.

According to Kremlin aide Yury Ushakov, this was provided when Russian President Vladimir Putin and Turkish leader Erdogan discussed the issue by phone on Wednesday.

“I can only say that a telephone conversation between our president and Erdogan took place yesterday, and the topic [of Turkey’s presence in Syria] was addressed. Yes, he [Erdogan] gave an explanation,”Ushakov told reporters on Thursday, without elaborating.

“Currently, in the framework of the ‘Euphrates Shield’ operation we are specifically working with our partners and allies. Our goal is to clear Syria, this region, from Daesh [Arabic pejorative term for Islamic State], from terrorists and Al-Nusra [Front] insurgents,” Cavusoglu said, speaking at a joint press conference with Russian Foreign Minister Sergey Lavrov in the Mediterranean town of Alanya.

“We will continue to pursue a policy that is harmonic and coincides with the position of Russia – to search for and find a political solution to the conflict and to provide systematic humanitarian assistance,”Cavusoglu added, as quoted by the Interfax.

He stated that Turkey’s policy on Syria “remains unchanged.”

“We are cooperating with other countries, but we think that our close cooperation with Russia will provide greater benefits,” Cavusoglu said.

Without a political solution on Syria, the fight against IS may prove ineffective, the Turkish foreign minister acknowledged following the meeting with his Russian counterpart.

Lavrov stressed on Thursday that he expected close Russia-Turkey cooperation on Syria to help make a real contribution to the implementation of decisions by the international community.

Erdogan comes face to face with US, Russia in Syria

Turkish President Recep Tayyip Erdogan has been promising since September to liberate the northern Syrian town of al-Bab from the Islamic State (IS) and move east to Manbij to rid it of the Kurdish People’s Protection Units (YPG). Turkey claims that the YPG — the core of the US-supported Syrian Democratic Forces (SDF) fighting IS — and its parent organization, the Democratic Union Party (PYD), are terrorist groups linked to the outlawed Kurdistan Workers Party (PKK), but it has failed to generate international support for this position. Recent developments on the ground also point to increasing difficulties for Erdogan’s efforts to fulfill his promises.

Summary⎙ Print Turkey may have gone into Syria to push back Syrian Kurds, but it now finds itself confronting both Russia and the United States.
Author Semih IdizPosted November 29, 2016

After capturing the nearby IS stronghold of Dabiq in October, Turkish-backed Free Syrian Army (FSA) militias, Ankara’s main proxy in Syria, have been unable to muster a serious attack against al-Bab. The situation grew militarily complicated for Turkey after its jets began striking YPG targets in the area — resulting in the United States withdrawing air support for FSA and Turkish forces — and after Russia and Syrian regime forces made serious headway against the FSA in Aleppo, to which al-Bab provides access.

Turkey had launched Operation Euphrates Shield into northern Syria on Aug. 24, proclaiming that its mission was to defeat IS, push YPG fighters east of the Euphrates River and establish a 45-kilometer-deep (28 miles) “safe zone” on the Syrian side of the border. Ankara moved to establish a safe zone on its own after failing to secure international support for one. It claims such an area will provide protection for civilians uprooted by the war and also prevent illegal crossings into and out of Turkey by members and recruits of IS and similar groups.

It is no secret, however, that Turkey’s major reason for the proposed zone is to prevent Syrian Kurds from establishing a contiguous region along the Turkish border. The zone would include the yet-to-be liberated al-Bab to the south, and if Ankara has its way, Manbij, just west of the Euphrates, as well.

On Nov. 22 at the conference “Turkey’s New Security Concept,” Erdogan claimed the FSA was at the gates of al-Bab and implied that victory was imminent. “But that won’t be enough,” he said. “From there, we will move on to Manbij. The PYD and YPG are in Manbij. … We want them to leave.”

A few days after these remarks, Erdogan had a rude awakening, when on Nov. 24 an apparent airstrike hit Turkish special forces accompanying FSA fighters near al-Bab. Four Turkish soldiers were killed and nine injured. Some believe the attack was actually an IS suicide bombing, but the Turkish military said on the day of the incident that the evidence pointed to a Syrian jet.

Adding to Ankara’s shock was that the strike occurred on the first anniversary of the downing of a Russian warplane by Turkey after it strayed into Turkish airspace. Although Turkey and Russia reconciled over the event earlier this year, after Erdogan apologized to Russian President Vladimir Putin, it did not temper the widespread belief that Moscow had indirectly supported the attack on Turkish forces to avenge the downing of the jet. It is common knowledge that Syrian airspace is controlled by Russian-provided and -manned advance radar systems.

Clearly uneasy about the timing of the attack, Erdogan held two hasty phone conversations with Putin, Nov. 25 and 26. The semiofficial Anadolu Agency reported that the matter had been discussed, but gave no details. Deputy Prime Minister Numan Kurtulmus then told reporters Nov. 28 that Russia had denied involvement in the incident. The Syrian regime has remained silent about the affair, further compounding the mystery.

Mete Yarar, a former red beret commando who comments on security issues, argued after the strike, “[Turkey’s] rivals are carrying out the requirements of their proxy war [in Syria] just as [Turkey’s] independent operation against al-Bab is on the verge of succeeding.” Yarar did not spell out who “Turkey’s rivals” are, but his reference to Turkey’s “independent operation” is telling, revealing an attempt by pro-government commentators to deflect attention away from Russia and toward the United States.

Serkan Demirtas, a foreign policy commentator for Hurriyet Daily News, recalled that Col. John Dorrian, a spokesman for the US-led coalition against IS, had said Nov. 17 that the coalition was not supporting the Turkish operation in al-Bab because Turkey had launched it “independent” of the coalition. Demirtas argued, “The key word in the spokesman’s statement is ‘independent,’ which could be interpreted as meaning that Ankara and Washington can no longer coordinate their respective moves in Syria and have totally different objectives.”

Erdogan’s supporters are keen to present relations with Russia as a counterbalance to Turkey’s increasingly hostile ties with the United States and Europe. Ankara’s response to the attack on its forces was surprisingly low key. Prime Minister Binali Yildirim said Turkey would retaliate, but other than this remark, Ankara has remained largely mute about the incident. Many take this as an indication that Ankara also suspects Russian involvement.

As Demirtas pointed out, Turkey is not in tune with Russia in Syria despite its reconciliation with Moscow. Syrian airspace was closed to Turkish jets after an airstrike Oct. 22 against YPG targets that Ankara said killed “150 terrorists” (and the YPG said resulted in 10 deaths).

After that strike, Syria, clearly with Russian blessing, said that it would respond militarily to further violations of its airspace. The restriction was lifted after Gen. Hulusi Akar, chief of the Turkish General Staff, went to Moscow for talks. Turkish jets resumed operations in Syria Nov. 12, notably concentrating on IS targets only.

The restriction was reportedly reinstated for a while, after Turkey targeted YPG positions with artillery fire. Russia, like the United States, evidently wants Turkey to stick to targeting IS.

Brig. Gen. (Ret.) Naim Baburoglu considers the claim ludicrous that Russia was unaware of the airstrike against Turkish forces near al-Bab. He told Al-Monitor that Moscow does not want the FSA, or the YPG for that matter, in al-Bab because the town is a gateway to Aleppo, where the Syrian regime has recently secured major gains against the FSA.

“It is unthinkable that any jet in northern Syria, especially one belonging to the regime, can fly there without Russia’s knowledge or approval,” Baburoglu said. “What Russia and Syria are telling Turkey is simple: ‘Stop advancing on al-Bab.’”

He also believes the date of the strike on Turkish forces was indeed significant. “Putin is known to wait patiently for his moment,” Baburoglu said. “Moscow denies involvement in this strike, but the significance of its date was clearly not lost on Russians.”

That Russia wants Turkey to steer clear of al-Bab, and the United States wants it to stay away from Manbij, poses a major problem for Ankara’s military plans in Syria, Baburoglu observed. The bottom line is that Turkey not only faces IS and the YPG in Syria, but Russia and the United States as well. Given this, many argue that Erdogan is unaware of what he is up against as he tries to please his supporters with promises he will most likely not be able to keep.