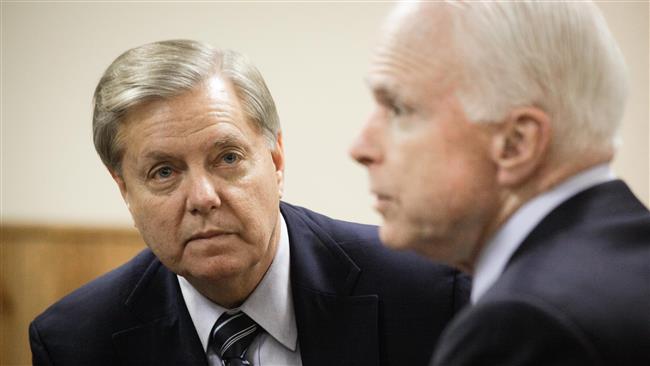 The families of some victims of the September 11, 2001 terrorist attacks are voicing opposition to proposed changes to a new law that allows them to sue the Saudi government over the attacks.

A group representing the families and survivors has accused Republican Senators John McCain and Lindsey Graham of “torpedoing” the law — the Justice Against Sponsors of Terrorism Act (JASTA) — under pressure from Saudi lobbyists.

“We have reviewed the language, and it is an absolute betrayal,” said Terry Strada, national chair of 9/11 Families and Survivors United for Justice Against Terrorism. “The president-elect has made his support for JASTA crystal clear, and there is zero risk that he will support this kind of backroom backstabbing of the 9/11 families.”

The JASTA act became law in September after President Barack Obama’s veto was overwhelmingly rejected by the US Congress.

McCain and Graham had proposed changes saying lawsuits can only be brought against countries that knowingly engaged in the financing or sponsorship of terrorism.

“All we’re saying to any ally of the United States [is], you can’t be sued in the United States for an act of terrorism unless you knowingly were involved, and the same applies to us in your country,” Graham said in a Senate speech in Wednesday.

The senators said that the law, which was passed in Congress on September 9, would be detrimental to America’s national security interests.

“It protects the United States in its efforts to defend itself in a very dangerous world,” Graham said. “We don’t want to be sued under those circumstances.”

US officials assert that the attacks were carried out by al-Qaeda terrorists but many experts have raised questions about the official account. They believe that rogue elements within the US government orchestrated the 9/11 attacks in order to accelerate the US war machine and advance the Zionist agenda.

Analysts argue that Saudi Arabia only played a minor role in 9/11, but the operation was essentially carried out by Israeli and American intelligence agencies to destroy the seven countries in five years, that were enemies or threats to the Zionist regime.

Saudi Arabia has strongly opposed the bill, threatening to sell off $750 billion in American assets if it becomes law.

“If the Saudis did nothing wrong, they should not fear this legislation. If they were culpable in 9/11, they should be held accountable,” Democratic Senator Chuck Schumer, the next Senate minority leader, said shortly after Obama’s veto on September 23.

US President-elect Donald Trump had said that he would allow families of 9/11 victims to sue Saudi Arabia in America.