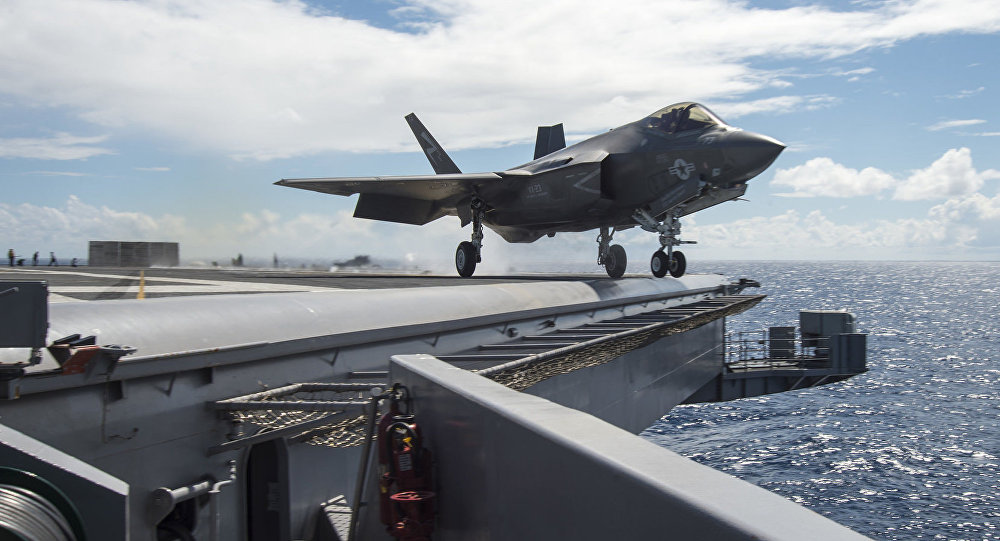 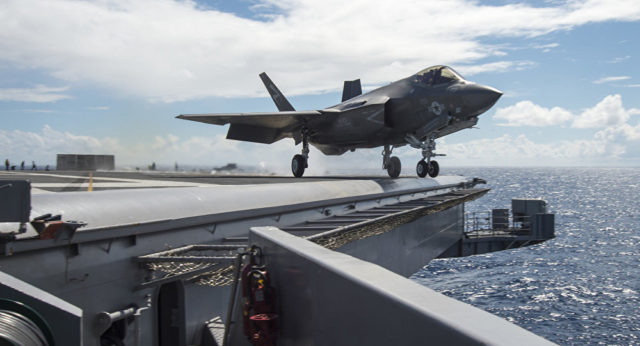 Earlier, the National Interest magazine published an article by defense expert Kris Osborn titled “Get Ready, Russia and China: America’s Aircraft Carriers Will Have Stealth Fighters Next Year.” In the article, the author claimed that “the emergence of a first-of-its kind carrier-launched stealth fighter is intended to give the [US] Navy more combat attack flexibility and attack sophisticated enemy air defenses or fortified targets from a sea-based carrier.”

Touching upon the issue, Vasily Kashin said that “to track down and destroy the US aircraft carrier combat groups, the Chinese will mainly rely on a combination of ballistic anti-ship missiles, submarines and land-based attack aircraft equipped with anti-ship missiles.” In addition, China is increasing investments in the development of large “strategic” reconnaissance drones resembling the US-made Global Hawk, as well as maritime reconnaissance satellites, according to Kashin.

He recalled that the Chinese J-20 fifth generation fighters are significantly larger and heavier than the F-35, which is why they are primarily designed for performing over-the-sea missions as attack aircraft carrying anti-ship missiles. Kashin went on to say that the US aircraft carrier battle groups with the F-35C fighters on board will face the threat emanating from the anti-ballistic missiles, the long-range H-6K bombers with heavy anti-ship cruise missiles, as well as the J-20-like stealth attack aircraft and supersonic anti-ship missiles launched from Chinese submarines.

“When the F-35 was being developed, the task of providing an aircraft carrier strike group with air defense was not a priority for this fighter jet which was primarily designed for destroying coastal targets. As a result, this warplane looks like an aircraft which is not suited for today’s possible combat realities the US may face in the Western Pacific,” Kashin said. In this vein, the F-35 will have to deal with enemy fighters  which will be equipped with powerful radars, long-range stealth “air-to-air” missiles, and which will be superior to the F-35 in terms of armament, speed, maneuverability and range, according to him.

The F-35 will have to prevent massive missile strikes and carry out permanent patrolling for air defense purposes. Also, the F-35 should itself act as a powerful anti-ship missile launching vehicle, something that may lead to increasing the combat load for the plane,” Kashin added. Touting the F-35 as “an undoubtedly perfect and revolutionary aircraft”, Kashin at the same time pointed out that “it was created in line with deeply erroneous strategic views of the 1990s which claimed that the US superiority at sea and in the air is guaranteed under all conditions.”

“It remains to be seen whether the Americans will manage to succeed with their objectives [with the help of the F-35] in new conditions,” Kashin concluded. The F-35 project, beleaguered from its inception, is expected to cost up to $1.5 trillion over the next 55 years, making it the most expensive defense program in history. According to a memo from Michael Gilmore, the US Defense Department’s director of operational testing and evaluation, while the warplane’s development phase is scheduled to officially end in 2018, the F-35 program is at “substantial risk” of not meeting the requirements.

In the latest of a series of errors, the US Navy’s F-35C is causing significant damage to runways upon landing — and the Pentagon is touting this as a good thing.

The F-35C variant is designed to take off and land on aircraft carriers, and later this month, the final round of developmental testing will take place aboard the USS George Washington. Until then, pilots are performing practice landings on land.

Unfortunately, these landings are producing noticeable wear and tear on runways. But with the F-35A and F-35B already declared combat-ready, the Navy is getting impatient, and rather than admit that the aircraft is facing yet another problem, it is creatively turning a bug into a feature. “They were landing in the same spot on the runway every time, tearing up where the hook touches down,” said Vice Adm. Mike Shoemaker, head of Naval Air Forces, according to DoD Buzz. “So we quickly realized, we needed to either fix the runway or adjust, put some variants in the system. So that’s how precise this new system is.” In addition, Shoemaker said that roughly 80% of the landings performed recently onboard the USS George Washington engaged the No. 3 landing wire, what he described as the perfect spot.

“I think that’s going to give us the ability to look at the way we work up and expand the number of sorties. I think it will change the way we operate around the ship…in terms of the number of tankers you have to have up, daytime and nighttime,” he said. “I think that will give us a lot of flexibility in the air wing in the way we use those strike fighters.” The F-35C relies on a pair of systems called Delta Flight Path and MAGIC CARPET to help coordinate landings.

These systems assist the pilot in ensuring that the aircraft captures the carrier’s arresting gear. While destroying runways is certainly a long-term issue that must be addressed, it’s not the only problem facing the F-35C. Earlier this week, the US Navy announced that pilots were experiencing visibility issues due to a “green glow” caused by the state-of-the-art helmet.

“It’s not so bad on a really bright night,” said Tom Briggs, acting chief test engineer for the Navy, according to Defense Tech. “On a dark night it skewers outside light reference for pilots. A pilot cannot pick up the lights on the carrier as well as he’d like to, he doesn’t necessarily pick up non-lighted signals on the ship as he is taxiing around, he has a harder time picking out aircraft that are flying around.” The Navy plans to install a software patch that will solve the issue.