Dissenting comments on the article are forbidden.

Today’s LA Times disinformation piece, published on this, the first anniversary of the 12/2/15 shooting at the Inland Regional Center, raises questions concerning the much-discussed problem of “fake news.” The mainstream media, backed by big  internet companies like Google and Facebook, claim that dissenting alternative media outlets are the prime source of “fake news” stories. But what happens when the mainstream media itself publishes fake news?

In reality, the mainstream media is almost nothing but fake news: The vast majority of mainstream “news” stories begin as press releases, that is, lies or spin generated for profit by a private, interested party. Only a small fraction of these paid propaganda puff pieces are ever seriously vetted by journalists before publication.

And if a mainstream journalist wants to write the truth about an important issue, he or she had better hope that nobody with money or power objects. Since virtually all mainstream news outlets are owned by the same six corporations with interlocking boards – meaning they are in essence owned by the same mega-corporation, itself owned and operated by and for the plutocracy – it is no longer possible for any mainstream outlet to seriously offend any powerful player.

The people who blew up the World Trade Center on 9/11/2001, and have since then massacred thousands in such follow-up operations as Bali, Madrid, London, Mumbai, Boston, Paris, San Bernardino, and Orlando, are powerful players. No wonder the LA Times chose to publish the perps’ press release as an “anniversary news story.”

The LA Times headline unveils the story as a classic misdirection ploy:

“A year after the San Bernardino terror attack, the FBI is still struggling to answer key questions”

Why did multiple eyewitnesses report that the shooters were “three large white paramilitaries” – a shooter team that could not possibly be mistaken for a bearded brown-skinned Muslim guy and his diminutive female alleged accomplice?

Why did police (or intelligence agents/organized crime assets whose cover job is police work) handcuff and execute the two Muslim patsies in a police car, then dump the bodies on the sidewalk?

Why was the most important alleged crime scene (the patsies’ apartment) not preserved according to normal police procedure, but instead immediately opened for a media propaganda stunt so that any evidence there would be ransacked, contaminated or destroyed?

The LA Times refuses to even acknowledge the existence of false flag interpretations of the shooting, and ruthlessly suppresses any such mention from its comments section. Instead, the official “radical Muslims did it” myth is taken for granted, and the “questions” that the FBI is supposedly “struggling to answer” involve whether any MORE “radical Muslims” might have known something was up. Such “reporting” should qualify everyone responsible for this story, including the LA Times management, for quick rendition to the Hague to be tried for the crime against humanity known as “propaganda for genocide.”

The LA Times “Mockingbird” piece refers to two previous proven false flags, the 1995 Oklahoma City bombing and the 2013 Boston bombing. But instead of citing the work of real journalists and investigators like the Oklahoma City Bombing Investigation Committee (whose work culminated in the documentary A Noble Lie) and Dave Lindorff (listen to my interview with him), the Times cites apparent intelligence agents working academic and think tank cover jobs who blow smoke over these events:

Brian Jenkins, a terrorism expert and senior advisor to Rand Corp.’s president, cited the 2013 Boston Marathon bombing case as another example in which terrorism investigators pieced together many of the facts but failed to answer all the questions. “When you are recreating the events before and after an attack, there are lot of pieces and sometimes there are gaps,” Jenkins said.

“There are always going to be untied threads,” said Brian Levin, a terrorism expert and director of the Center for the Study of Hate and Extremism at Cal State San Bernardino.

This is the “we’ll never really know” defense, designed to discourage real investigation by implying that the “unanswered questions” involve minor issues, rather than the false flag elephant in the living room.

More than 53 major false flag operations have been admitted to by the government responsible for the attack: 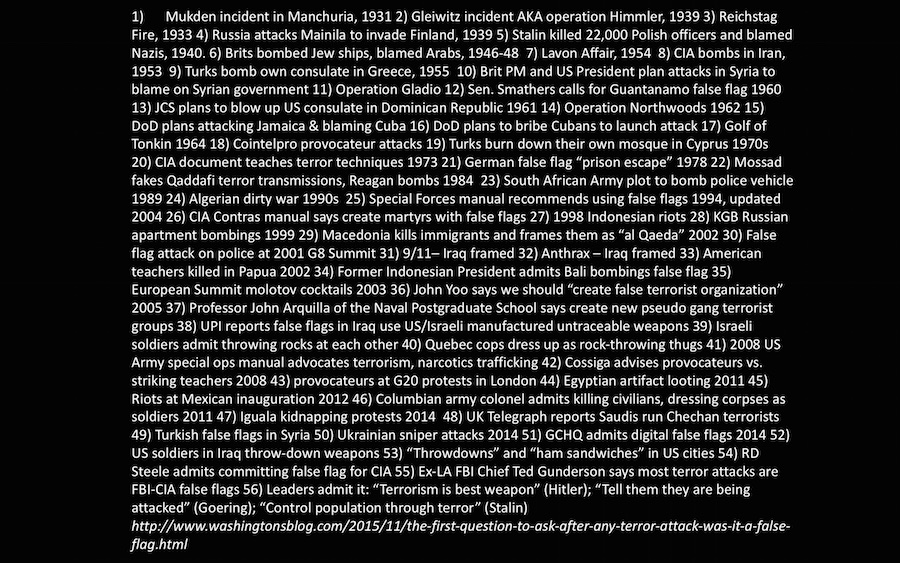 Most of the 55 leading public intellectuals represented in my False Flag Trilogy understand the scope and importance of false flag operations.

Yet the mainstream media will not even mention the issue…despite the fact that every major “left wing extremist” terror attack during the Cold War is now admitted to have been staged by Operation Gladio, run by elements of the Pentagon through its NATO assets; and despite the fact that FBI whistleblower Sibel Edmonds has stated that Gladio continues as “Operation Gladio B” staging false flag attacks blamed on “Islamic extremists.”

It’s time to end the genocide propaganda, expose the “war on terror” as the false flag farce that it is, take down the Gladio B network, bust the complicit Big Media into thousands of tiny pieces, and restore Constitutional governance.