[Editor’s note: Trump did not win this election, he lost by a large margin, something clearly proven by the statistics. It took the efforts of not just the Zionist organised crime cabal but also their allies in the FBI, Russian hackers and assets throughout the political and media worlds to get the disgusting, bloviating bag of hot air into office and now, even worse, their assets in the judicial system are acting to prevent justice and uphold this most crooked of ‘victories’.

The ‘election’ of the mob’s fatuous frontman marks the death knell of what vestiges of democracy remained in the USA, sealing the transformation into an oligarchy run by the few, for the benefit of the few.

The rest of the world, not half so dumbed down as the US electorate doesn’t know whether to laugh or cry at the whole farce for it is both humorous to see how supposedly educated people have fallen for this charade while at the same time terrifying that the world’s most powerful military is now in the hands of a bunch of lunatic criminals. Ian]

US President-elect Donald Trump turned back to cabinet-building Friday after a victory rally in the US Rust Belt region, where allies of the billionaire were pushing to stop a vote recount in three states that were key to his victory.

While few expect any change in the vote outcome, the Republican president-elect has railed against the recount efforts in Wisconsin, Michigan and Pennsylvania as “ridiculous” and “a waste of time.”

While Trump resumed interviews with potential cabinet members and other officials at his Trump Tower headquarters in Manhattan, a team of his attorneys filed suit in Pennsylvania seeking to deny Stein’s request.

They argue that the recount puts the state at “grave risk” of missing the Dec. 13 deadline for certifying its representatives to the electoral college that will formally elect the president six days later.

Similar legal efforts were launched in Wisconsin and Michigan, where state attorney general Bill Schuette, a Republican, filed suit saying Stein’s share of the vote – one percent – was too small to legitimize a recount.

“Her refusal to accept that state-verified result poses an expensive and risky threat to hard-working taxpayers and abuses the intent of Michigan law,” Schuette said in a statement, AFP reported.

The Rust Belt — which in the recent past leaned Democratic – was central to Trump’s upset victory, and he chose Ohio for the first stop of what is billed as a “thank you” tour that will take him next week to North Carolina and Iowa.

Thursday’s trip was unorthodox in more ways than one: from the campaign-style rally in Cincinnati, unusual for a president-elect, to Trump’s visit to a factory in Indiana after a very public intervention to keep jobs there.

“We’re doing a thank you run just to thank some of the states that we weren’t supposed to win and we won really in landslides in some cases,” the 70-year-old said in an interview with Fox News broadcast Friday.

Though his tone in Cincinnati was somewhat more conciliatory, Trump made it clear he wants to maintain the fervor that he generated on the campaign trail by issuing provocative statements, and stirring up his rank-and-file by slamming the press.

The president-elect also – unconventionally – used the rally to reveal his nomination of James Mattis as defense secretary, a choice that drew praise from both Republicans and Democrats even though it creates an unusual situation in a country that values civilian control of the military.

Former defense secretary Bob Gates, speaking to reporters as he left Trump Tower on Friday, said he had told the president-elect that the tough-talking retired Marine general was a “terrific” choice.

The 66-year-old “Mad Dog” Mattis, who commanded US forces in both Iraq and Afghanistan, is the second retired general to be named to Trump’s governing team after Michael Flynn, tapped for the post of national security advisor.

Among the day’s many sightings at Trump Tower was former U.S. ambassador to the U.N. John Bolton, reportedly on the short list to be secretary of state – but who left without speaking to the press.

Trump is maintaining his cards close to the chest on the top diplomat job, with one-time critic Mitt Romney – the 2012 Republican presidential candidate – also being considered, along with former New York mayor Rudy Giuliani and Senator Bob Corker.

Trump’s pick for secretary of state is being watched all the more intently in light of the concern sparked by his somewhat off-the-cuff calls to foreign leaders – most lately to Pakistani Prime Minister Nawaz Sharif, who Trump reportedly addressed as a “terrific guy.”

But criticism of Trump’s style doesn’t seem to have fazed the septuagenarian – as he made clear Thursday while touring a Carrier air conditioner factory, having struck a deal with parent company United Technologies to keep about 1,000 jobs in Indiana, instead of shifting them to Mexico.

As he glad-handed workers on the assembly line, Trump defended his unusual negotiations with the company.

“I think it’s very presidential. And if it’s not presidential, that’s OK because I like doing it,” Trump said. 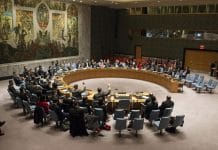 Some Snakes Fly Through the Air With the Greatest of Ease

Why Did the Maya Abandon Tikal?

Syria Prepares For Military Confrontation With Turkey In Northeast

Mobsters Out of Federal Lockdown Still Get COVID-19