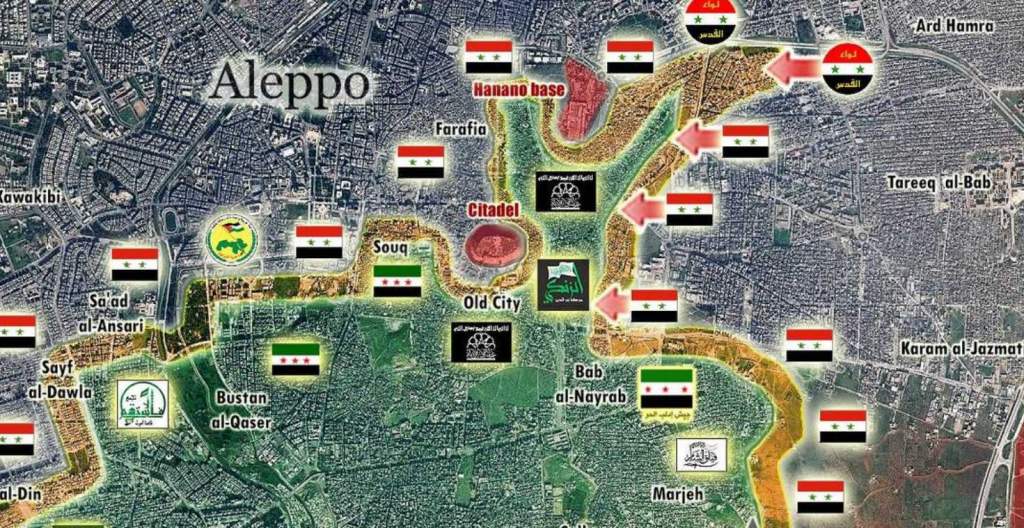 The Western Coalition war on Syria in the media did not work on Aleppo, despite the recruitment of the UN to add its outrageous claims of Aleppo being a vast graveyard. The civilian casualties have been nowhere near the amount to make such claims.

By keeping the rest of the Aleppo perimeter quiet, and confident that the drone surveillance and Russian airforce has been able to block or destroy anymore jihadi counter attacks coming up from Idlib, the Syrian Arab Army (SAA) has been able to mount multiple attacks at different points on the jihadis lines to find a breakthrough spot and then quickly exploit it.

What we are seeing is that when the jihadis are pushed out of their defensive lines they are not doing well at fighting on the move due to the logistics involved in ammo supply “on the fly”.

I have seen propaganda videos from the jihadis on how their troops move, fast for sure. But they are only carrying the ammo they have on them to fight. No one in an unit is pulling even a small cart with AK rounds in it, nor can you see anyone  with a heavy backpack on as a designated ammo carrier.

If you get pinned down in a house in street fighting you know you can’t last long with what you are carrying, so you develop a survival skill to boogey out before you are cut off.

Mainstream media has not pushed the significance of all the opposition fighters around Damascus taking the surrender option, handing over their weapons for a free bus ride with their families to Idlib, who will not have a lot more mouths to feed. Thousands have taken the offer and that is freeing up more Syrian Army troops to join the fight in the north. The Russian Air Force has been a huge help but there is no replacement for having the needed manpower to take and hold ground.

Western media is soon going to have to be facing the sad victims of their own propaganda when they begin telling their stories about living under the jihadis. One of those will be how they always confiscated the relief supplies that came in during past ceasefires to for their own use and to control the population.

If a family did not have one male member fighting for the jihadis the family got nothing. As Gordon would say, “Welcome to how the world really works.” A lot of lives are going to be saved due to finally ending the reign of terror over Aleppo, and the people there will know who to thank for it, and it won’t be the UN or John Kerry or anyone in the West.

I will close with what it really takes to pull off an infantry frontal assault, an SAA unit attack to take a jihadi position south of Aleppo. You will notice they have a lot of ammo, thanks to the BMPs that can lug it all.  Grenades seem to have fallen out of style, with RPGs squeezing them out.

But as you will see at the end of this action, when taking trenches, grenades are wonderful things to have, and lots of them. These guys had to make due with a small satchel charge when 12 grenades would have been a lot better. I have not seen a flame thrower used anywhere  either,…a shame really, as lighting up the bad guys has always been a morale booster for attacking troops.