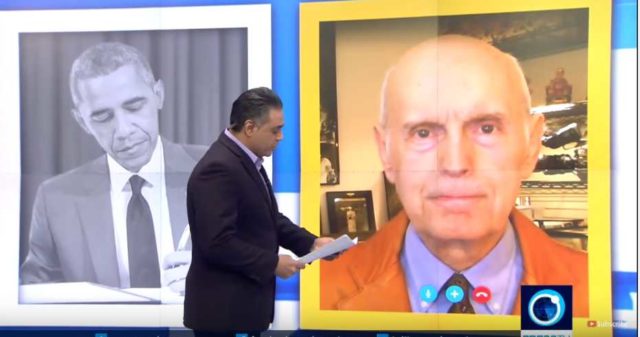 [ Note: My predictions in this interview that the main reason the Western and Gulf State backers want to drag out the taking of Aleppo as long as possible are coming true.

They are piling on a very coordinated but ludicrous propaganda campaign of Assad slaughtering the civilians in Aleppo, when it has clearly been the Western-backed forces doing that. The stories of the escaped civilian human shields are confirming that in spades now with corporate media giving it light coverage.

The terror supporters also know that when Aleppo falls, the highly experienced combat troops there can be deployed to attack the remaining jihadi forces from multiple directions, which is what is working in taking Aleppo. In fact, with the final fall of jihadi-held Ghouta district near Damascus, 1500 Syrian troops have already been redeployed north to the Hama front to pick up the pace of retaking Hwy 5.

When I was in Damascus as an election monitor in June of 2012, while in the business office in the evening with the windows open for the breeze, I could hear the shelling on the outskirts of the city. The military plan had always been to collapse the Syrian Army via death by a thousand cuts, with endless ambush opportunities by the jihadis with the long supply lines, and the ability to pick off smaller garrisons one by one.

The Islamic State has usually executed all of its SAA captives, even making videos for recruitment purposes to bring in more dead-ender young Muslim males to “be somebody” by becoming a head chopper. The US coalition has been onboard this whole slaughter program, and the public bears a share of the blame, as Congressmen get little outrage complaints from their constituents. If those people found themselves on their knees with a blindfold on someday, I would only have a little sympathy for them... JD ]

Russia has warned about a plot to re-brand Nusra Front terrorists in Aleppo. Nearly all the militant groups in the eastern part of the Syrian city, where the so-called Army of Aleppo was recently formed, are under the control of Nusra Front, according to Russian Foreign Minister Sergei Lavrov.

Jim W. Dean, managing editor of the Veterans Today from Atlanta, told Press TV on Saturday that the US and its regional allies are using media hype to hinder military advances of the Syrian forces in Aleppo.

“The US is doing everything it can to try to slow down this momentum, while they figure out someway ‘what we can do to derail the success of the Syrian, Russian, Iranian and Hezbollah coalition,’” Dean said.

Washington and its allies “want to keep these guys (terrorists) fighting; they want to bleed the Syrian army down; they want to drag this thing out so they can try to figure out how they can somehow derail the Syrian success that is going forward.”

Dean said once Aleppo is retaken, all Syrian troops will be redeployed to counterattack in some other areas like Idlib and Hama.

Certain Western governments, he said, are trying to assure militants in Idlib that the US and its allies would do everything they can to support the terrorists.

The West is also using the policy of demonizing the Syrian army as a tactic, Dean added.

“What they’re just trying to do is control the narrative because unfortunately their intelligence agencies are very tightly woven into their media particularly in the US, especially in Britain and in Canada.”

He also ruled out media propaganda against the Syrian armed forces over the alleged use of excessive force in eastern Aleppo, saying accusations of barrel bombs being used and the city turned into a “mass grave” are baseless.

“The Syrian Army has no interest in killing civilians and destroying civilian property because it does nothing to further their cause of taking the city.”

The Syrian government’s advances have taken by surprise many of the foreign states that have been channeling financial and military support to the militants since the onset of the foreign-backed militancy in Syria in March 2011.

The conflict in Syria has claimed the lives of more than 400,000 people, according to an estimate by UN Special Envoy for Syria Staffan de Mistura.