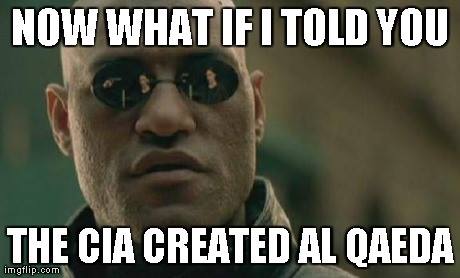 Udo Ulfkotte was an editor for the German daily newspaper, Frankfurter Allgemeine Zeitung for many years. One can say that he was a puppet of the CIA as well. In fact, he was “on the payroll of the CIA and German secret service.”

Keep in mind that the CIA is not some benign organization that is out there fighting evil. They have been creating evil and then convincing the American people to fight it for decades. How elsewhere would they spread drugs over the Middle East and even Asia?[1] How else would they be behind ISIS, the so-called Syrian rebels, and other terrorist organs?[2]

When people in Baghdad were saying that the CIA was behind ISIS, the New York Times called this “conspiracy theory.”[3] But the same New York Times admitted the following year that “C.I.A. cash ended up in coffers of Al Qaeda”![4] So, which is it?

In any event, we know that the CIA and terrorist organizations like ISIS and the so-called Syrian rebels are concentric circles, and VT writers and editors have been pointing this out since the beginning of time. For example, Gordon Duff pointed out back in 2013 that “The Muslim Terrorist Apparatus was Created by US Intelligence as a Geopolitical Weapon.” That was true then and it is still true now.

But Ulfkotte abandoned the sinking ship when he realized that he was being completely manipulated as an editor. He now wants no part of this and has come out and exposed what New World Order agents are actually doing to Germany in particular.

“I’m ashamed I was part of it,” he said. “Unfortunately I cannot reverse this. I ended up publishing articles under my own name written by agents of the CIA and other intelligence services, especially the German secret service.”

Ulfkotte has published a book exposing the New World Order ideology in Germany. “When I told the Frankfurter Allgemeine that I would publish the book,” he said, “their lawyers sent me a letter threatening with all legal consequences if I would publish any names or secrets – but I don’t mind. No German mainstream journalist is allowed to report about [my] book. Otherwise he or she will be sacked. So we have a bestseller now that no German journalist is allowed to write or talk about.”

Ulfkotte doesn’t budge when he says that journalists and the Mass Media are bought with a huge price:

“We’re talking about puppets on a string, journalists who write or say whatever their masters tell them to say or write. If you see how the mainstream media is reporting about the Ukraine conflict and if you know what’s really going on, you get the picture. The masters in the background are pushing for war with Russia and western journalists are putting on their helmets.”

Ulfkotte seems to be saying that New World Order agents and the media are out to brainwash the masses. How did he get co-opted into this dark and evil enterprise? He confesses:

“It started very soon after I started working at the Frankfurter Allgemeine Zeitung. I learned to regard luxury invitations as quite acceptable and to write positive articles in return. Later on I was invited by the German Marshall Fund of The United States to travel the United States. They paid for all my expenses and put me in contact with Americans they’d like me to meet.

“Bye and bye you get completely brainwashed. I ended up publishing articles under my own name written by agents of the CIA and other intelligence services, especially the Bundesnachrichtendienst.”

Once Ulfkotte was on the payroll of the CIA, they sent him to places like Iraq and Iran, and he personally witnessed the Iraq-Iran war, during which civilians were dying by the numbers. Ulfkotte says that

“Back in Frankfurt it appeared my superiors didn’t show much interest in the atrocities I had witnessed. They allowed me to write an article about it, but they severely limited the size of it as if it wasn’t of much importance.

“At the same time they asked me to hand over the photos that I had made to the German association of chemical companies in Frankfurt, Verband der Chemischen Industrie. This poison gas that had killed so many Iranians was made in Germany.”

Right here we are confronted with an inescapable conclusion. From 1980 until 1988, New World Order agents were covertly helping Saddam to destroy Iran. In fact, they gave Saddam enough chemical weapons to liquidate the Iranians. They were basically trying to kill two birds with one stone. By 2003, New World Order went back to Iraq and largely destroyed the country they were supporting in the 1980s.

Obviously they were using Iraq for a larger ideological purpose in the 1980s. The Ayatollah Khomeini quickly saw that this was the case. He launched the term “The Great Satan” specifically to describe what “international Zionism” was doing in the Middle East.

“International Zionism” used the United States to exploit “the oppressed people of the world by means of the large-scale propaganda campaigns” and “sucks the blood of the defenseless people as if it alone, together with its satellites, had the right to live in this world.”[5] If you think Khomeini was wrong, then look at Afghanistan, Syria and other places, and you will sink the fingerprints of “international Zionism” all over them.

“Khomeini was here referring to Iraq, which had already launched a full-scale attack on Iran, as the proxy of America and Israel. Khomeini was hoping for Islamic unity, but he found neither sympathy nor allies in the Islamic world.

“Pakistan, which was a Saudi asset, had already been seduced by Saudi and American money and recruited into the final campaign of the anti-Communist crusade, when their ISI stepped forward as the exclusive arms brokers for the mujahideen in Afghanistan.”[6]

Throughout the Iraq-Iran war, the masses in the West remained largely silent. They felt no urge to tell their own government to abide by the moral and political order in the Middle East and elsewhere. In fact, the United States and Britain literally overthrew a democratically elected government in Iran way back in 1953,[7] and there was no mass demonstration at all. Furthermore, New World Order agents have yet to apologize for that coup.

The wars in Syria and elsewhere have obviously turned the ideological tides on their heads, and the masses are slowly but surely learning that destroying countries in the Middle East and pursuing perpetual wars actually have enormous consequences. For example, some people in places like Syria obviously have to relocate, and some of them choose to migrate to the countries of their oppressors. Do you expect them to love what they perceive as the children of their oppressors?

In short, if there is a flood of rape allegations in Germany and other places,[8] it is because the masses should have stood up against their government’s diabolical plan in the Middle East long ago. Who really can forget sodomy at Abu Ghraib? Who can forget sexual abuse of boys and torture in places like Afghanistan?[9] Was there a mass movement in Europe against those atrocities?

No. By the way, Guantanamo is still holding dozens of individuals who have never been convicted of terrorist activities.[10]

If we must talk about building a wall in America, we need to start talking about the detrimental consequences of invading foreign lands and destroying the livelihood of decent people first. We hate to beat a dead horse here, but the Iraq war alone will cost America at least six-trillion dollars.

Furthermore, to start talking about invading foreign lands, we need to stop following the dictates of the country that has been leading America to perpetual wars in the Middle East. We all know the name of that country by now.

[5] Quoted in E. Michael Jones, “The Great Satan and Me: Reflections on Iran and Postmodernism’s Faustian Pact,” Culture Wars, July/August 2015.

[10] I have addressed this issue in the first volume of Christianity & Rabbinic Judaism.