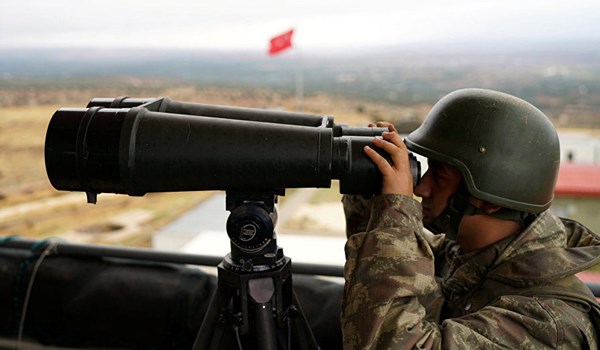 TEHRAN (FNA)- Ankara is in talks with Russia to keep a way open for its affiliated forces to stay in regions North-East of Aleppo province, while it has suspended operations in the strategic al-Bab region. dissident sources said.

According to the Shabakat Akhbar Syria Mottaheda news website, dissident sources said Ankara has decided to suspend military operations in al-Bab city as long as the war in Eastern Aleppo city is underway.

The sources added that the Turkish fighter jets have not carried out any mission over the Syrian airspace in the past few days.

Also, the Turkish army has issued a short statement on pounding the ISIL positions in Northern Syria, stressing that the bombing has been carried out from inside the Syrian territories near the borders, they said.

The report was released after the Syrian military aircraft targeted positions of the Free Syrian Army (FSA) terrorists in the area of al-Bab in Aleppo province and halted the advance of the Turkey-backed militants in the area, a media report said.

The bombing carried out by the Syrian Air Force on the positions of the Free Syrian Army militants in the area of al-Bab, previously controlled by ISIL, halted the advance of the FSA fighters, who are supported by Turkey.

After recapturing Manbij from ISIL by Kurdish forces, al-Bab and Deir Hafer have turned into the largest bases of ISIL in Aleppo province.

A field sources earlier said that the ISIL has shifted plans to launch new offensive to reoccupy the city of Manbij to surrender both Manbij and al-Bab to the Turkey-backed militants in a later move after Turkish President Recep Tayyip Erdogan said his troops’ incursion into Syria is meant to fight and topple President Bashar Al-Assad.

Reports said that the ISIL has started a new scenario in the regions near Manbij in coordination with the Turkish government and has attempted in the past few days to reoccupy the villages in the Western and Northwestern parts of the Kurdish-held Manbij with the help of the Turkish forces who are stationed in the Northern villages.

According to field sources, the ISIL terrorists have also agreed to evacuate the strategic city of al-Bab in several stages and reoccupy Manbij again so that the Turkish government will be able to deploy forces in the city under the pretext of fighting against terrorism.

Sources in the SDF (Syrian Democratic Forces) also disclosed that the US forces stationed in Northern Syria have also agreed with the Turkish scenario and have instead promised the Kurdish forces to give them control of the Southern parts of Raqqa province.

A Syrian official underlined last week that Ankara is technically at war with Damascus given its lack of coordination with the Syrian army in al-Bab city.

“Considering its campaign against the terrorist groups in Aleppo, the Syrian army is fighting against Turkey indirectly” as the latter is in on the opposite side and helping the terrorists in the same region, Samir Sulayman, a high-ranking official at Syria’s defense ministry, said.

He explained that since the Syrian army is fighting against the terrorists in different parts of the country, specially Aleppo, it has indirectly entered a battle against Turkey because the terrorist groups are enjoying Ankara’s arms support and consultations.

Sources close to the Syrian dissidents disclosed last month that the Turkish army has deployed anti-aircraft ‘Stinger’ missile system to the regions near al-Bab city Northeast of Aleppo province.

Ahmad al-Khatib, a journalist with close links to the Free Syrian Army terrorist group, disclosed on his twitter page that Turkey is equipping its affiliated forces stationed near the strategic city of al-Bab with Stinger missile system.

The Turkish media had also reported that a number of trucks carrying air defense systems were moving from Oguzeli region in Gaziantep towards the Syrian borders.

Tensions between Damascus and Ankara have gone so high that Syrian sources report army’s preemptive strike in the Northern parts of Syria to block the Turkish army’s attempts to establish a buffer zone in the region.

After liberation of 25 farms and villages from the terrorists’ control in Aleppo, the Syrian army forces continued to advance in the region to surround the strategic city of al-Bab from its Southern and Western sides.

The ISIL stronghold city of al-Bab Northeast of Aleppo is on the verge of a major war among the Syrian army, the Kurds and the Turkey-backed forces that are part of Turkey’s Euphrates Shield Operation.

Reports said if the Euphrates Shield Operation forces reach the gates of al-Bab city, the ISIL terrorists will withdraw without any resistance which will pave the ground for the Turkey-backed groups. The ISIL has adopted the same strategy in a number of villages and towns in the Northern parts of Aleppo.

Meantime, possibility is high for direct clashes between the Syrian and Turkish armies as the Turkey-sponsored forces that are backed up by the Turkish army tanks stress that they are resolved to take al-Bab.

Last month reports said that the Syrian army had inched closer to one of the most important strongholds of the ISIL in the Arab country, and were only three kilometers away from the Northern Syrian city of al-Bab in Aleppo province, while the Ankara-backed militants are also racing towards the city.

According to the Al-Mayadeen TV channel, the army troops managed to dislodge ISIL terrorists from six settlements near al-Bab, and are approaching the ISIL’s stronghold city.

The Free Syrian Army supported by the Turkish Air Force and armored vehicles has also launched an offensive to push terrorists out of the vital Bastion of ISIL as capturing the city is of strategic importance to Ankara in order to prevent the Kurds’ reunification.

Military sources had disclosed in mid September that a large number of Syrian soldiers are deployed at Kuweires airbase to start military operations against the terrorists in al-Bab.

“Hundreds of Syrian soldiers are now in Kuweires airbase 40 kilometers to the east of Aleppo city to start al-Bab military operations against the ISIL terrorist group,” the Arabic-language media quoted an unnamed military source as saying.

Also, another source said in mid November that the Syrian army has sent around 1,000 reinforcement troops to the Eastern countryside of Aleppo to start the operation that aims to create a safe zone in areas in the vicinity of Kuweires airbase, including al-Bab, adding that the Syrian government troops’ military operation in al-Bab region is also meant to block further advances of the Turkey-backed terrorists in al-Bab region.

Experts believe that Syrian army’s operations in al-Bab and Deir Hafer that are entrance gates to Raqqa province signify the government forces plan to start an attack on Raqqa soon, while the Kurdish forces have also started a large-scale offensive on Raqqa, codenamed ‘Wrath of Euphrates’, a couple of days ago.

Turkey declared on August 24 that its Army has launched ‘Euphrates Shield’ military operation in Syria, as Ankara claims that it has begun to cleanse the ISIL terrorists from its border with the Arab country.

But, despite Ankara’s allegation, Turkish military forces support militant groups in Northern Syria, and fight against Kurdish forces in the region.

Turkish officials have frequently stressed that operation ‘Euphrates Shield’ will continue to create a safe zone in Northern Syria, while Ankara was forced to halt air support for its ground incursion into Syria on October 22, after Damascus vowed to shoot down Turkish Air Force planes in Syrian skies, accusing Turkey of violating its national sovereignty.

Damascus had condemned Ankara’s military operation and entry of Turkish special forces and tanks into Syria, while Moscow expressed deep concern about what is happening in the Syrian-Turkish border area.