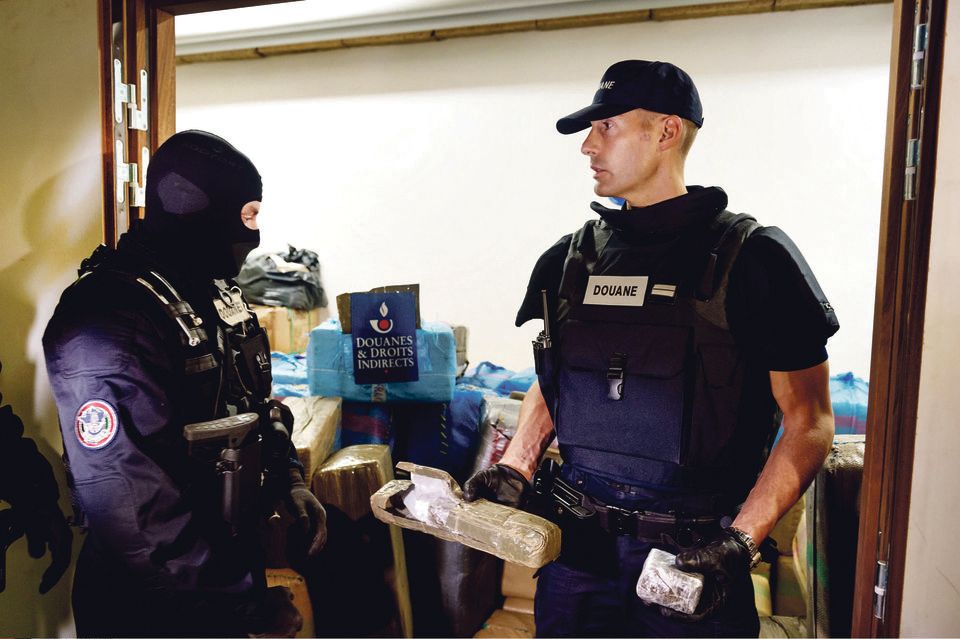 New documents that “Liberation” had access reveal how 40 tons of cannabis were imported into France with the complicity of the police under cover dismantle networks. An operation in the back of the judiciary on war service background.

The scandal Stups enters its most explosive phase. More than a year after the spectacular seizure of seven tons of cannabis Exelmans boulevard in central Paris, the judicial investigation by judges Baudoin Thouvenot Marc Sommerer and reveals the existence of a system of unprecedented magnitude. Dozens of confidential reports, internal memos and emails, which Libération had access, come support our first revelations on what amounts to a true state traffic (see release of 23 May and 9 June). For under cover of a covert sting operation dubbed “Janissary”, aimed at dismantling trafficking networks, the Central Office for the Suppression of Illicit Trafficking in Drugs (OCRTIS) directly supervised the importation of at least 40 tonnes of cannabis in October 2015. the equivalent of the French consumption for nearly two months. A system set up at the highest levels of the police hierarchy, which totally escaped judicial control. “We have not been informed of any transport of narcotics, told the investigating magistrates Lyonnais judge handling the case, Bertrand Grain. We would never have accepted delivery of one ton of cannabis under cover of the undercover operation. It was agreed that the convoys of narcotics is within this framework should not involve “only” a few hundred kilos of cannabis . ” These convoys would then have been the subject of a special commission, which never measure was required.

A case all the more embarrassing that this massive importation operation was long-planned, and well-known principle of a number of senior police officials. Many of them will soon have to explain to the General Inspectorate of the National Police (IGPN), police fonts, which according to our information just cosaisie. Furthermore, the Paris prosecutor opened in September another judicial investigation following revelations of a former informant, who told in the columns of Liberationhave been asked by the former head of the OCRTIS to load and unload 19 tons of cannabis in southern Spain. A case that should eventually be joined to that of 7 tons of Exelmans Boulevard.

In this last part, it all began in March 2015. The Commissioner François Thierry, then boss OCRTIS , asks a judge to Lyon instruction, Bertrand Grain, to establish a measure of infiltration. Officially, it is approaching the suspected traffickers to better lock up them and then destroy the drugs. In this case, the target is a certain Omar (1), presented as a trafficker at the head of a “sprawling criminal organization” .Infiltration must be organized in collaboration with the Inter-Ministerial Technical Support Service (Siat), which manages all agents undercoverin the police. Unprecedented device must be set up. Under cover of infiltration, it is really to bring the drug under police surveillance to identify intermediate networks. A legal device, provided to be strictlysupervised by a magistrate. According to a confidential note of the Central Directorate of Judicial Police (DCPJ), dated April 2015 (see cons), the Janissary operation aims to “implement for the first time in Europe a full import logistics of drugs to eradicate more routing networks into one legal case “ . Besides OCRTIS and Siat, Spanish, Moroccan and Algerian services are in the loop. Several executives DCPJ are also informed of this unprecedented infiltration, the Comptroller General Philippe Veroni, head of the Branch of the fight against organized crime and financial crime.

The Janissary operation is based mainly on an informant OCRTIS, Sofiane H., considered one of the biggest European traders and incidentally main rival Omar. A snitch at exorbitant power, recruited in Spain in 2009 and processed directly from Thierry François. Strangely, no one has seen fit to inform the Lyon judge of his presence in the proceedings. The role of this “uncle” peerless is a closely guarded secret within the police. For years, when he was already working for OCRTIS, the trafficker has organized its business from his cell, where her lawyer undertook to provide the phone chips.

Sofiane H. finally released from prison late 2014, after being granted parole-won. For years, e u the services rendered, senior police hierarchy has in effect turned to pop out. “The number of business conducted by him testifies to its effectiveness and its stubbornness,” wrote François Thierry in June 2012. Sofiane H. can also count on another very effective lawyer, Anne-Claire Viethel, which is none other than the companion of the boss OCRTIS. Just released, the trafficker is immediately asked to serve as pivot Lyon infiltration. It is he who will have credibility agents Siat to the organization of Omar.

On March 5, in conjunction with the Lyon process, François Thierry informally prevents prosecutors from Paris Bobigny of informant status Sofiane H., taking care to specify that the trafficker is associated with an infiltration process. “He is currently in contact with the logistics of a powerful organization of cannabis trafficking to allow the imminent implementation of a judicial infiltration authorized by a magistrate,”said François Thierry, yet aware that the judge Lyon n is not informed of the existence of the informant. One way to partition preventing justice to have a comprehensive look at the operation. Prudent, the Lyon magistrate seek the opinion of its parquet on the possible use of cannabis under police surveillance deliveries. “We asked ourselves some time on whether to allow imports of drugs that might be lost,” he explained. On April 16, the judge finally clears, however, provided that “the infiltration does not constitute an incitement to an offense” . In short: the agents do not have to play an active role in traffic. For him, it is unthinkable to endorse the entry of large quantities of cannabis in the territory.

A specific timetable is then fixed by the DCPJ. In late April early May: setting up logistics closer to the criminal organization of Omar. Mid-May to September: actual infiltration. September-October: arrest of sponsors, suppliers and recipients. In early October, in fact, things are accelerating.Five policemen of OCRTIS and Siat down to Barcelona to watch the arrival of a truck from Tangier. A Renault Magnum 40 tonnes registered 2500 GBZ, filled to the mouth of cannabis resin. The truck then crossed the Pyrenees as part of an “open border” granted by the prosecutor of Perpignan, in the context of a separate procedure. The merchandise is then réceptionnée in Venissieux, near Lyon, where it is unloaded at a warehouse in the presence of two agents of Siat, under the permanent control of the OCRTIS. Two teams come first get some of the goods, about 4 tons. The rest of the drug goes back to Paris the next day aboard two trucks convoyed by five cars connected by a phone fleet. Cannabis is then stored in a flag of Aulnay-sous-Bois (Seine-Saint-Denis), before being dispatched between Mulhouse, Nantes and Exelmans boulevard, where more than 7 tons are stored in vans parked right front of home Sofiane H., a duplex with indoor pool rented 9000 euros per month.Throughout this period, the trafficker is in permanent contact with both treating agents to OCRTIS, Thierry François and his deputy, Patrick LABERCHE. “We saw every day , explain Sofiane H. I was just following orders.”

But October 17, 2015, everything collapses. Clearly well informed, the National Directorate of Customs Intelligence and Investigation (DNRED) terminates abruptly operation of OCRTIS, grabbing 7 tons stored Exelmans Boulevard. A record in the capital. In greeting the day a“fatal blow” worn traffickers, Francois Hollande know that this drug is part of a batch of 40 tonnes entered the country with the help of French police. He did not doubt that the seizure of Customs is the result of war service which took an unprecedented scale (see our article).

Furious, François Thierry denounced to his superiors “untimely dry entry and precipitated Customs” , which compromises a “very promising criminal infiltration.” Contacted by Libération, the commissioner says he always informed the magistrates procedures involving informants. But the Paris prosecutor does not see it that way.Believing that OCRTIS concealed the existence of Sofiane H., an“information capital”, François Molins, the prosecutor of Paris, soon relinquished the service for the benefit of the Narcotics Brigade of the ’36’ and gendarmerie research section of Paris.

Arrested in Belgium after two months on the run, Sofiane H. is repatriated to Paris by helicopter, escorted by the GIGN. During the search of his last apartment, the Belgian police got hold of a bookforgotten in his flight in which he recorded some of his accounts. On a scribbled pages, there is mention of € 43.7 million including Algiers, Punta Cana (Dominican Republic), Thailand, Marrakech, Spain and Dubai.

Heard from by French judges, Sofiane H., repeated that he took “no action” , demanding repeatedly to be confronted with officials OCRTIS.“You think with my experience trafficker, if the goods were mine, I would have left nearly 400 packages on my street?” Did he joked in hearing. How far the judicial authorities were they informed about the exact role of the informant unconventional? Now both sides are opposite: the prosecution of Paris on one side and DCPJ another.According to Thierry François, his exemplary informant would have alone, “the seizure of over 60 tons of cannabis resin, the identification of dozens of seasoned criminals, the elucidation of a dozen settling and more a hundred arrests. ” A version confirmed by a note signed by the Central Director of the Judicial Police, Mireille Ballestrazzi, that “several documents and meetings allowed since 2010 to OCRTIS to present the role of the Sofiane H. Paris prosecutor” . The prosecution would also“discussed the major business permitted through through Sofiane H., in full knowledge” .

Assertions which have boosted the Paris prosecutor, Francois Molins. In a scathing letter dated June 10, 2016, the Paris prosecutor said to have been informed of the existence of that Sofiane H. March 5, 2015, “with no case against him or subsequently transmitted” . This divergence of views between the highest law enforcement authorities raises many questions. How were 40 tons of cannabis could enter French territory outside control? Who was for this drug? Sofiane H. and how he hit for his valuable services? Officially, the trafficker was paid “only” twice by the Central Bureau of sources from the Ministry of Interior, for a sum total of 45 000. But no one imagined that a snitch of this magnitude could take such risks for a sum as paltry. To answer these questions, the judges will now ask all those in the high police hierarchy, who took part in this strange system.