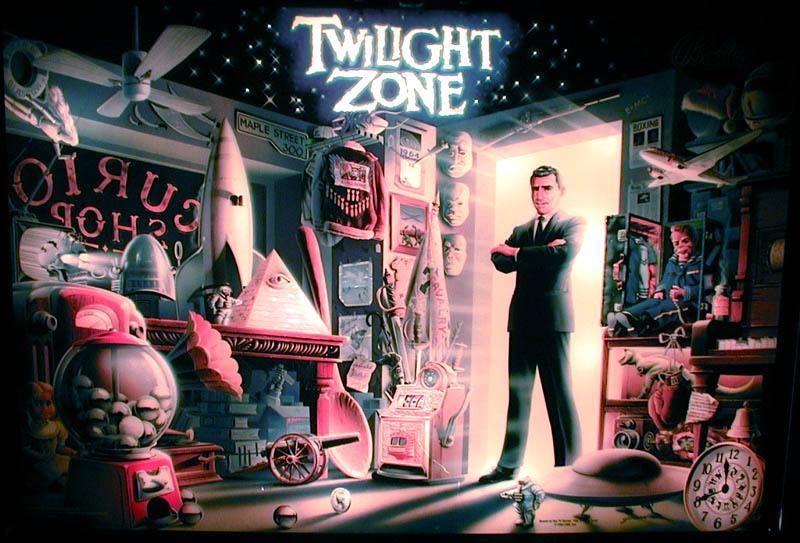 [ Note: You must forgive me for the Rod Serling plug but we are all children of our times, and those who can remember watching early black and white TV will never forget the Twilight Zone.

Later on, as we came of age in the 60s, the term “Far out” from the Cheech and Chong movie, entered our lexicon.

Both that and Serling’s magical introductions using his doorway portal that he was going to take you on a journey to the unknown seemed a fitting description of where we all are on the front end of the Trump years, or is it a dynasty.

I say that as he his daughter and his Harvard son-in-law (dad donated $2.5 million to ease his way in) seem to be getting on the job training for being first lady and a future president. And no, I am not kidding, I think Trump is already working on this.

Sit back and fasten your seatbelts, ladies and gentlemen. It’s going to be one hell of a ride I can assure you, and hence my sharing the Google photo find from one of my favorite TZ episodes above… JD ]

The Reality TV show star turned President is moving forward as I expected, to focus his skills on capturing and holding the center stage while subcontracting the areas where he clearly knows nothing. The heavy lifting work is going out  to either establishment Republican elites, his campaign staff ideologue favorites, or the big money Republicans, the kind that took the country down the drain in the financial crisis of 2008.

Trump has left his common man followers like a bride at the altar. The big banksters from Goldman Sachs are both in the White house with the Breitbart News chairman Steven Bannon, now having his resume updated with his having been a former wealthy Goldman’s banker, something almost none of Trump’s Tea Party people knew about.

The Treasury Department will be going to the Wall Street boys as it usually does, instead of the financial anti-fraud policemen it needs, so no “draining the swamp” there.

Former 17-year Goldman’s banker Steven Mnuchin got the Secretary slot despite having worked for George Soros, the über-liberal, private regime-change dynamo himself. He tells us his number one priority will be tax reform, cutting corporate taxes back to 15%.

Senator Elizabeth Warren has already attacked him for having been a major player in inventing and marketing the abusive mortgage financial products that blew up the country. With people like this, Trump is bringing the swamp monsters back into the center of power.

Trump had used the Wall Street folks as a whipping boy to con the large anti-establishment and somewhat naïve voting block, knowing that if he won, he could replace them with his new and richer power base of billionaire insiders, like Wilbur Ross ($3 billion) who will have the commerce department, and who has been vocal on breaking trade agreements.

Betsy Devos, a billionaire herself, got the Dept. of Education. She is married to Dick Devos, an heir of the Amway fortune that has been a huge power broker in the Michigan Republican party.

Her brother, Eric Prince, was the founder of Blackwater, which kicked off the huge growth of military and regime change outsourcing, and which our Intel sources tell us run their own private regime change and drug running operations far from the prying eyes of Congressional committees or the Inspector General’s office of the military.

Congressman Mike Pompeo seems to have gotten the CIA top slot due to his House Intelligence committee’s long running investigation of Hillary Clinton in the Benghazi tragedy.

Although an intelligent ex-Army officer, having graduated at the top of his class at West Point, and later editor of the Harvard law review, he will be the most partisan choice for CIA director in recent memory.

He is also closely aligned with the infamous NeoCon Koch brothers, who backed the Tea Party with their large funding, which put them in the perfect position to take over its national operations.

Pompeo has been a huge critic of the Iran deal and has publicly stated that the US should “walk away from it”. He is joined in that regard with retired General Mattis, past head of the US Army Central Command in Europe, who got the Defense Department.

Mattis is on record of having called Iran the biggest threat to Middle East security, but left out that the economic sanctions force Iran to start its own Manhattan-style program for import substitution, including its basic defense equipment. It lived under the threat of a pre-emptive strike through that period when it had all it could do to build up a credible defense. Claims of its being an offensive threat are just another war hawk hoax.

Mattis has a personal grudge over the Republican Guards having engaged US troops during the Iraq war. But the good General, especially at Central Command, had security clearances high enough to know that both the US and Israel had backed terror operations inside Iran, as part of a long-running destabilization campaign that killed thousands of Iranian citizens.

If anyone had done that to Americans, people like Mattis would have been at the head of the line wanting revenge, and justifiably. But once again, the American people have not been told the dirty little story of our own terror campaigns in Iran, and how they can boomerang. Failure is always an orphan.

So Trump has shown us that, while he has recently advocated the US getting out of the regime change foreign policy business, he plans to crank up the Iran-bashing of the past, revealing not only his “loose cannon” side, but surrounding himself with others of the same ilk.

The measure of a statesman is being able to learn from the past mistakes of others. The Iran nuclear deal exposed in shameless detail that the world public had been hoaxed on Iran’s having a nuclear weapons program.

We were assured of the hoax by countless hawks, Israeli lobby operatives, and two decades of Israeli leaders warning us about the Iranian mullahs being one or two years away from having the bomb.

None of these entities who wanted so badly to kill the Iran deal were able to put any evidence on the table that their long time claims were true. In fact, when they were dead wrong, not one admitted or apologized for having abused and endangered the public by creating conditions that could easily have trigged an unnecessary conflict in the Mideast via a preemptive strike.

Not only did none of them pay a political price for their incompetence and open fraud, but they are riding the wave back into power with the Trump campaign to have another go at Iran. As Obama replaced the Iran bogeyman with the new Russian Bear and the Asia Pivot, Trump appears to be rearranging the game, but keeping the invented threat hoax con on the public in play.

These administration picks are in sharp contrast to Trump’s victory tour and first 100 days roll out, where he claims, “We will destroy ISIS. At the same time, we will pursue a new foreign policy that finally learns from the mistakes of the past. We will stop looking to topple regimes and overthrow governments, folks.” This all sounds wonderful, except that many on his team are life-long war hawks.

Vice president Pence is the point man on what might be an overreaching plan to curb illegal immigration, to redo ObamaCare, and to rebuild the military. The first two will trigger post-election battles with the Democrats, and to think that anything major can be done with the military in three months, other than putting on a big show, is just childish.

Even the tax reform he wants to do can drag on for a year, sifting through all the details. Ramming things down the Democrats’ throats could create bad blood that will follow Trump through this whole first term, and crank the Democrats up to replace him in four years with a vengeance.

We shall see, and so will Mr. Trump and gang. Maybe having the NeoCons in charge for four years is the wake up dose the country needs to grow up and recognize the real domestic terror threats that we have right here at home in our leadership and institutions.

It will be painful, but if we survive, it we may come out better off — more mature politically and wiser for the effort. But I can’t help but think of the famous Rod Serling early TV series where he would close his intro with, “You’ve just crossed over into… the Twilight Zone.”