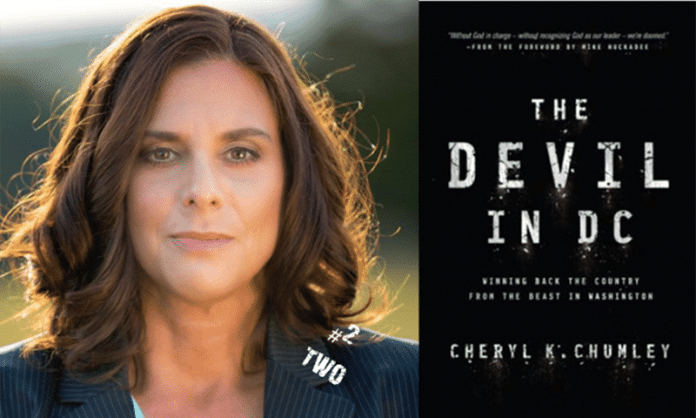 Cheryl is an author, writer, and speaker, passionate about topics related to Christianity and the country’s Judeo-Christian roots, the Constitution, politics and policy, United Nations and sovereignty issues, Congress and Capitol Hill – pretty much anything that lends itself to exposing those matters that run counter to freedom, biblical principles and the preservation of America as the greatest country the world’s ever seen.

Her publication credits include the Blaze, the Washington Times, Lifezette, PamelaGeller.com and more. She is a skilled public speaker and media guest, and has made hundreds of appearances on national and local television and radio, and in person at various forums and events, to discuss politics and culture, the role of Christianity in government, media bias and limited government principles.

Her latest book,”The Devil in DC: Winning Back the Country From the Beast in Washington,” with a foreword by Mike Huckabee, former governor and White House hopeful, tells Christians and patriots how exactly to put the nation back under God’s control and wrench power from the atheists and progressives who have taken root. Check out what others, like radio giant Michael Savage, have said about it so far!

Cheryl is also the author of “Police State USA: How Orwell’s Nightmare is Becoming Our Reality,” (foreword: Rep. Louie Gohmert), a book that gives a snapshot look at how government is encroaching at all levels – federal, state and local – in order to better educate and equip patriots with the tools to reclaim our greatest Founding Father gift … the notion that our rights come from God, not government.

Basically, if Police State USA lays out the problems, The Devil in DC gives the solutions.

Previously, she was a news writer and digital editor with WND and The Washington Times, and an online editor for Tea Party Review Magazine. She’s worked for years in newspaper journalism – winning numerous investigative and hard news awards in the process, particularly for her use of the Freedom of Information Act and Sunshine Laws to hold government officials accountable – and in radio newsrooms as a host, producer and writer.

Cheryl was selected to join the prestigious Robert Novak journalism fellowship program (now a program of The Fund on American Studies), for the 2008-2009 year, and spent a full 12 months investigating National Heritage Areas and the state of private property rights in America. Her findings were well-published and she was ultimately asked to speak about NHAs before a group of congressional staffers in the House, where she cautioned them to look beyond the rhetoric to see the constitutional dangers of these land grabs.

And finally … she’s an Army veteran who currently lives in Northern Virginia with her husband, four children, Golden Retriever, Black Lab and cat. In her spare time, Cheryl also spent four years serving as a CASA volunteer – a court appointed special advocate – to help judges make the difficult decision about where abused and neglected children should live.

DONATIONS: Please stand behind this apostolate with a financial contribution. If you have been with us for a month or two please consider as I need all the help I can get in this information war. When you give you give to Jesus for this work is His. For CASH, CHECK or MONEY ORDER contributions please email me at apostleofmary@hotmail.com

TOPICS INCLUDED IN THIS TALK: her latest articles on Obama and the second amendment, post election analysis, will Trump do as he says?, attack by mainstream media on alternative news, rise in the police state, the devil in DC, are we headed for economic collapse and revolution?, the war on terror and Islam?, Vaccines and the police state?, censorship, facial recognition and a new app, we are the terrorists according to the NWO, rise in militias?, FEMA camps and MUCH more!