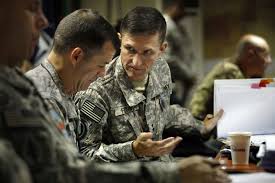 VT continues to support General Flynn (part of the way we serve our Russian masters according to the Washington Post) despite his procliving and that of his son for being duped by fake news stories.  We have offered to help Flynn with this the way we help our “Russian masters” as we are told.

Vice president-elect Mike Pence said this morning that Michael Flynn Jr., the son of incoming national security adviser Michael Flynn, is no longer involved in the transition team efforts, despite reports that he had an official email associated with the team.

On the daily transition call, spokesman Jason Miller told reporters that Flynn Jr. was helping with “administration” and “scheduling” for his father early on in the efforts but is no longer involved. It is unclear what the timeline is on when the son.

Flynn Jr. has generated controversy in recent days for sharing stories about “Pizzagate,” a fictitious conspiracy that alleges Clinton allies run a child-sex ring out of a D.C. pizza restaurant. After a gunman showed up to the restaurant Sunday attempting to “investigate” the supposed child-sex ring, Flynn Jr. insisted on Twitter that the story still hadn’t been adequately disproven, despite the fact that there is no evidence and the shooter himself said he stood down because he couldn’t find anything.