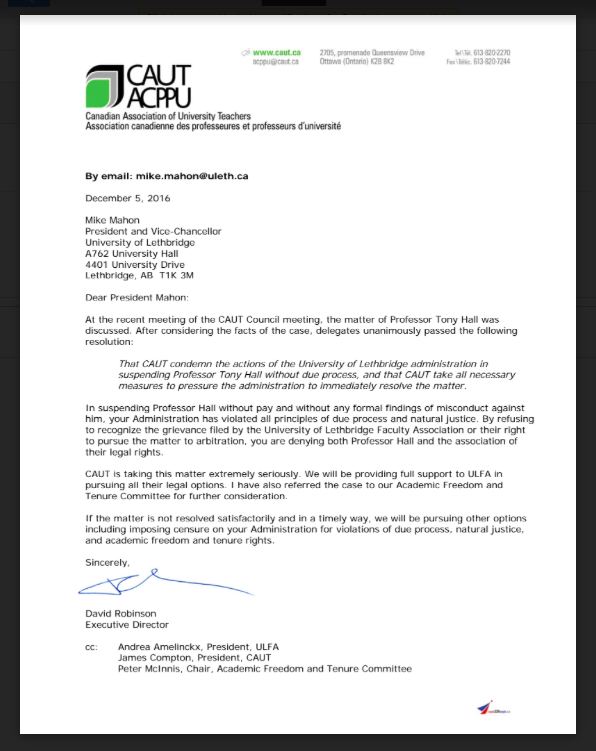 CAUT is using extremely strong language. The statement accuses Mike Mahon of violating “all principles of due process and natural rights” and “denying…legal rights” i.e. violating the law.

How could the University of Lethbridge resolve the situation? I spoke to Professor Hall this morning. He was optimistic about the long-term prospects of his academic freedom struggle, and grateful to CAUT for doing the right thing. But he also hastened to point out that Mike Mahon and others at the University had created an extremely hostile work environment for him, and that the University of Lethbridge needs to do much more than merely allowing him to return to teaching in the horrendous environment they have created for him.

By suspending Professor Hall without pay, without any form of due process, the University essentially endorsed the outrageous, libelous lies concocted by the B’nai Brith and its suspected confederates. The biggest lie, the one that launched the entire witch hunt, was a Zionist-fabricated “kill all Jews” image that was mysteriously planted on Professor Hall’s Facebook page without his knowledge. B’nai Brith and Facebook conspired to create a media scandal about the image, and despite Hall’s complete innocence, media outlets including the Lethbridge Herald and CBC labored to fabricate a spurious link between the horrific, genocidal image and Professor Hall in their coverage of the incident. Rather than reporting the truth – that Professor Hall was the innocent victim of a smear campaign – they absurdly implied that Professor Hall himself wanted to “kill all Jews” !

The genocidal image was created by a Florida-based Jewish Zionist false flag terrorist named Joshua Goldberg (who has been arrested for plotting fake “Islamic terrorism”) and then planted on Professor Hall’s Facebook page by persons unknown. Though the planted image was credited to “Glen Davidson,” an Alberta resident, Davidson  says he was not the source of the image, and does not know how it came to be surreptitiously planted, under his name, on Professor Hall’s Facebook page. See:

The PLANTED weaponized image that got Professor Anthony Hall suspended

Why would B’nai Brith and its accomplices target Professor Hall for this kind of slander operation? Presumably they disapprove of Hall’s research and public statements on various controversial issues, especially his work on false flag terrorism. (Hall has interpreted such events as 9/11 and the Ottawa capitol shooting as apparent false flag public relations stunts designed to further the Zionist war on Islam and Muslims.)

The University of Lethbridge, by implicitly endorsing B’nai Brith’s libelous big lie, has managed to tarnish Professor Hall’s reputation on campus to the point that many students and colleagues have accepted the false notion that Hall is a “genocidal anti-Semite.” Hall has suffered hostile treatment on and off campus as a result of the University’s going along with the B’nai Brith’s witch hunt.

At a very minimum, the University needs to:

*Vow to support Professor Hall’s academic freedom to study, write, and speak about any and all issues;

*And make it absolutely clear that Professor Hall has done nothing wrong, but has in fact been doing exactly what all tenured professors are implicitly required to do by virtue of their tenure: Investigate the  most controversial issues and pursue the truth wherever it leads, no matter how much  powerful interest groups may be displeased.

Editors’ note: Jim Dean suggests that people who care about freedom should consider emailing CAUT a brief note of thanks:   acppu(at)caut[dot]ca