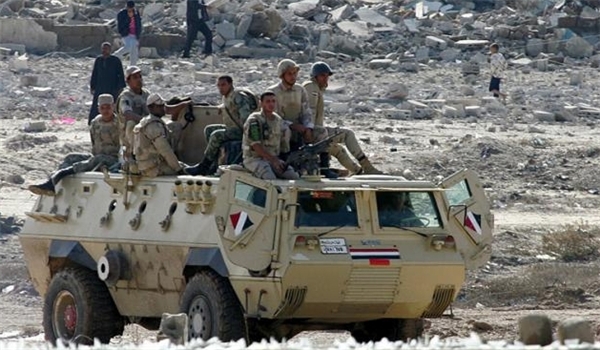 TEHRAN (FNA)- The Egyptian army plans to send a unit of sappers to Syria in the next few days to help their Syrian counterparts with demining the recently-freed territories in Aleppo, media sources disclosed on Wednesday.

According to the Arabic-language al-Akhbar newspaper, the engineering team will arrive in Tartus port in Syria soon to cooperate with the Syrian and Russian forces in missions to defuse the mines and IEDs (Improvised Explosive Devices) planted by terrorists before retreating from Eastern Aleppo districts.

The report said the Egyptian military and security experts are now present in several Syrian bases and coordination centers, including the Syrian Army General Staff center in Damascus, Hama airbase, Hmeimim airbase and T4 base in the Eastern parts of Homs.

Also, a number of Egyptian officers and security and military attaches are present in the operations rooms in Dara’a, Hama, Jourin village (Southeast of Hama) and Sahl al-Iqab regions where the Syrian and Egyptian officers share experience.

Based on information obtained by the Arab media, the number of the Egyptian military and security experts in Syria will most likely increase to 200 by the end of the current year.

While Saudi Arabia and its allies in the Persian Gulf region, particularly Qatar, are financially and militarily supporting the militants fighting to unseat Syrian President Bashar al-Assad, media reports say that Egypt is helping Damascus with anti-terrorism operations.

Late in November, a military-diplomatic source confirmed earlier reports that Egyptian military men are participating in operations against the terrorist groups in Syria.

While Cairo has dismissed presence of its military forces in Syria, the Arabic website of Sputnik news agency quoted the source as telling Izvestia newspaper that the information disclosing that the Egyptian army men are present in Syria is true.

Izvestia newspaper quoted the security source as saying that a number of Arab states, including Egypt, have changed their position on Syria’s developments. Cairo has understood that the ISIL and other terrorist groups at war with the Syrian government are serious threats to Egypt as well.

The source added that Damascus welcomes participation of any Arab countries in anti-terrorism efforts in Syria.

Egypt denied having sent troops to Syria and reaffirmed its commitment to respect other nations’ sovereignty, in a statement attributed to its Foreign Ministry spokesman.

“Some Arab newspapers have reported about Egyptian military presence in Syria,” the statement published on the Foreign Ministry’s Facebook page read, and added, “Egypt is committed to the principle of non-interference in the internal affairs of other countries.”

The spokesman stressed there are existing constitutional procedures on foreign deployment that Egypt had to follow.

“And those actions cannot be taken secretly without informing the Egyptian people about their objectives,” he added.

Lebanese media reported last month that several Egyptian pilots have entered the Syrian army’s airbase in Hama, adding that Cairo has decided not to remain indifferent and participate in the anti-terrorism operations in Syria.

According to al-Safir daily, the Egyptian forces have started their work in Hama airbase since November 12 and a group of 18 pilots have also jointed them, mostly helicopter pilots.

The paper said it is not clear if the Egyptian pilots have started airstrikes in Syria or not but their presence at Hama airbase shows that Egypt has made its decision to speed up aid to the Syrian government.

According to the daily, the first group of 4 high-ranking Egyptian officers entered Syria and were deployed in the Syrian army’s general staff base in Damascus, adding that two Egyptian Major Generals have started work in the Syrian army’s operations room since over a month ago, and their responsibility is leading reconnaissance operations, the latest of which was in Quneitra in Southern Syria, the Golan Heights and Dara’a.

The Lebanese paper quoted Arab sources as saying that Cairo is also studying dispatch of its ‘Thunder Forces’ to Syria to help the army more extensively in operations.

It also quoted senior Syrian security sources as saying that the Egyptians have promised Damascus to send their forces to Syria and will start massive participation in battles in Syria on January 23, adding that Cairo’s military presence will go beyond its role in Hama airbase.