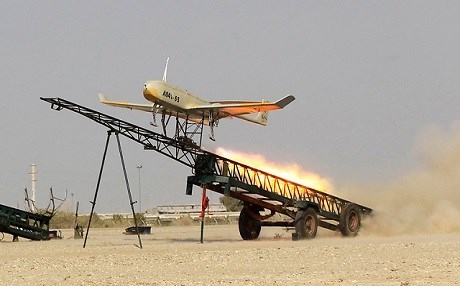 ANKARA, Turkey – An Iranian-made drone was involved in the killing of four Turkish soldiers in an air attack on November 24, not a Syrian warplane, said a senior Turkish official on Wednesday.
“It is not clear whom the drone belongs to,” the anonymous source told Hurriyet news, explaining that the type of drone is operated by the Hezbollah militia by the Iranian Islamic Revolutionary Guard Corps’ (IRGC) Quds Force in Syria.
Shortly after the incident Turkish President Recep Tayyip Erdogan called his Russian counterpart President Vladimir Putin. According to the source “both parties have reached a consensus that the attack was carried out by an unmanned drone.”
Moscow said they were not behind it and the Syrian Army is not known to possess or operation such drones.
“There are various opinions on this issue and there is a kind of blame game going on,” the source said. “Russia is clearly affirming that they did not do it. But, there are many other elements in the region. After thorough investigations, we will be able to say who the perpetrator was, so now is not a good time to accuse any country.”
Turkish Prime Minister Binali Yildirim initially blamed Damascus immediately after the incident and threatened to retaliate.
The attack happened outside of the ISIS-occupied city of al-Bab, which Turkish forces are readying to assault.
ATTENTION READERS
Due to the nature of independent content, VT cannot guarantee content validity.
We ask you to Read Our Content Policy so a clear comprehension of VT's independent non-censored media is understood and given its proper place in the world of news, opinion and media.